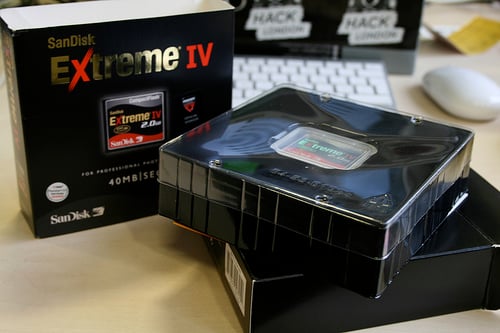 Photography lovers in Canada may soon be caught in the crossfire of the music industry’s fight against piracy. The Canadian Private Copying Collective is pushing for a new tax on memory cards that would be based on the capacity of the cards — $0.50 for 1GB or less, $1 for 1-8GB cards, and $3 for any card with over 8GBs. Law professor Michael Geist writes,

The financial impact of the levy would be significant. A 2GB SD card currently sells for about $6.00 and this would add an additional dollar or almost 15% to the cost. Given that the levy would remain static (or even increase) but the costs of SD cards are dropping by roughly 30% annually, the percentage of levy in the overall cost would likely gradually increase over time. Moreover, music plays a small role in the use of memory cards. A recent report indicates that digital cameras are the primary market for SD cards with smartphones the second biggest (and fastest growing) market. Music is a small part of the equation, yet the CPCC is demanding payment for every memory card sold in Canada regardless of its intended or actual use.

You can read more about the current state of Canada’s private copying levies here.

How to Shoot Portraits on an Infinite White Background