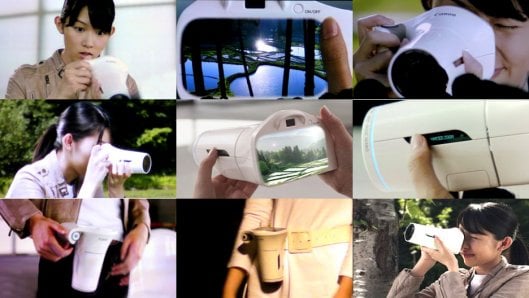 Canon debuted this concept camera at the Shanghai World Expo, revealing their plans for the future of photography. The concept camera, dubbed the Wonder Camera, has many functions that already exist in many cameras, but takes them a step further.

The Wonder Camera would have high-speed, multi-level focus. It would also have the ability to shoot both stills and video, but quality stills can also be taken out from individual frames of the video reel. Not only will it have face recognition, it will have smile recognition and the ability to single out those who smile out of a crowd.

It also would have super zoom capabilities, but improved built-in image stabilization to reduce the need for tripods — and perhaps eliminating the need for interchangeable lenses altogether. Canon also hopes to integrate faster wireless connectivity into the camera body.

And on top of all the features, the resolution might be measured in something much larger than megapixels — petapixels, perhaps?

Canon forecasts that a working, consumer-ready model of this camera might not exist for another 20 years, but it’s likely that we’ll see some of these features seeping into near-future consumer cameras.

You can see a video of Canon’s presentation here.

How do you think these kinds of technological changes might shape the future of photography? Let us know in the comments.