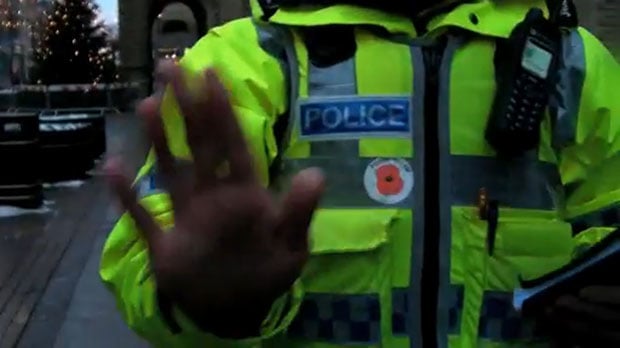 Last December an amateur photographer named Bob Patefield was in Accrington town centre shooting photographs of the Christmas celebration when he and his friend were stopped by police for suspicious behavior. He and his friend refused to provide the police with personal details (since they were not obliged to), and were stopped a total of three times before Patefield was finally arrested. His friend complied, provided his personal information, and was released on the spot.

After being detained for eight hours, he was released without charges.

Patefield asked if the officer had any “reasonable, articulable suspicion” to justify him giving his details.

“I’m an officer of the law, and I’m requiring you, because I believe your behaviour to be of a suspicious nature, and of possibly antisocial [nature] … I can take your details just to ascertain that everything is OK.”

Patefield and his friend maintained that they did not want to disclose their details. They were stopped a third and final time when returning to their car. This time the officer was accompanied by an acting sergeant. “Under law, fine, we can ask for your details – we’ve got no powers,” he said. “However, due to the fact that we believe you were involved in antisocial behaviour, ie taking photographs … then we do have a power under [the Police Reform Act] to ask for your name and address, and for you to provide it. If you don’t, then you may be arrested.”

Image credit: Screenshot captured from video by The Guardian.

Notice Anything About This Painting?