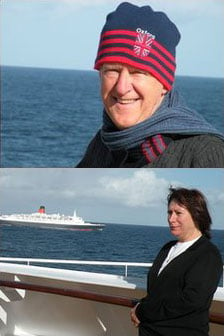 Here’s a story that’s sure to drop your jaws: A Spanish trawlerman named Benito Estevez was recently fishing off the west coast of Europe when his net brought up a digital camera from the Atlantic seabed.

Five photographs were recovered from the camera’s memory card, and included shots of a man and woman posing on the deck of a ship (seen to the left).

In one of the photographs (bottom), a woman is seen on the deck of the QM2 cruise liner, with the QE2 in the background. BBC News reported the story on television last night, and published it online early this morning. This afternoon, they reported that the owners had been found. A friend of the owners, living in England, noticed their photographs last night just as she was about to switch off her television.

Turns out the owners, Barbara and Dennis Gregory of South Africa, were traveling from New York to Southampton in 2008 when the camera fell overboard into the Atlantic. Mrs. Gregory says,

Somebody spotted dolphins in the water and the two of us jumped up and that was it. It literally bounced off his lap, across the deck and into the water with hardly a splash and it was gone. […] There’s no way we could ever have imagined that this thing would ever turn up again. It sunk to the bottom of the Atlantic. […] You daydream that it might happen that these pictures are going to pop up somewhere, but you don’t think it’s ever going to happen.