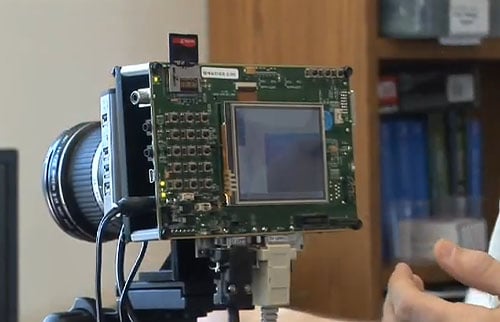 The web is abuzz over a project over at Stanford that aims to revolutionize how we think about photography by building an open source camera (dubbed Frankencamera).

While you try to wrap your mind around this new paradigm, I’ll point out of a few of the important aspects of the project and throw in some of my thoughts on it.

The established order of things up to this point has been for behemoth camera corporations (i.e. Canon, Nikon, etc…) to sell consumers (i.e. you and me) hardware and software that they spend years and billions of dollars developing and tweaking. The same was true of operating systems and browsers before open source projects like Linux and Firefox crashed the party.

If this research group at Stanford successfully releases an open source platform for imaging, a whole new world of opportunity opens up for photographers and developers alike. Instead of attempting to have features added to future cameras by making noise and requesting them, we would be able to take matters into our own hands, building hardware or developing software to suit our needs.

Imagine if you could program your DSLR with some common Photoshop actions that you always run when post-processing your images, so the photos come out the camera with your edits already applied.

Even more advanced post-processing techniques could be moved into the camera, providing photographers with features that the large camera makers would never add to their DSLRs, since they prefer sticking to the fundamentals and leaving post-processing up to the photographer. For example, a photographer could choose to have his camera automatically bracket, merge, and tone map, allowing him to download HDR photographs directly from his camera.

The team behind the Frankencamera also envisions a future where photographers can download applications onto their cameras, just like apps can be downloaded to the iPhone from the App Store. Wifi on your camera? Directly uploading photographs to Flickr? Different photo styles and camera effects? The possibilities are endless, and it would definitely be interesting to see what applications developers would come up with.

As Apple’s App Store has shown, it definitely pays to put application development in the hands of individuals rather than keep it behind closed doors with your relatively small group of developers and engineers.

How would an open source software platform change the game in terms of hardware? The Frankencamera is currently being developed with a hodgepodge of parts — everything from Nokia cameraphone sensors to Canon lenses. If an open source camera gained any significant piece of the camera market pie, then third party lens manufacturers such as Tamron and Sigma would no doubt join in on the fun.

I’ve read elsewhere that third-party lens makers are forced to reverse engineer the mounting and focusing systems of camera makers such as Canon and Nikon. This would be completely unnecessary for an open source camera, and the third-party companies would even be able to contribute towards the software side to improve the functionality of their lenses.

A critical piece of the puzzle, however, is the issue of sensors. I’m sure the bulk of the billions spent on R&D has to do with sensor technology, and pretty much no one can compete with the larger companies on this front. No matter how popular an open source camera might be, adopters will likely have to take a hit on sensor quality unless one of the big players decides to contribute their sensors.

Personally, I think this is a great idea and really hope the research group succeeds in getting something off the ground and into our hands. I only wish it were a project being done over here at UC Berkeley, though I do know there’s some pretty interesting work being done related to camera sensors and bokeh rendering.

To learn more about the project, you can read the Stanford news article, or watch this YouTube video put out by Stanford.