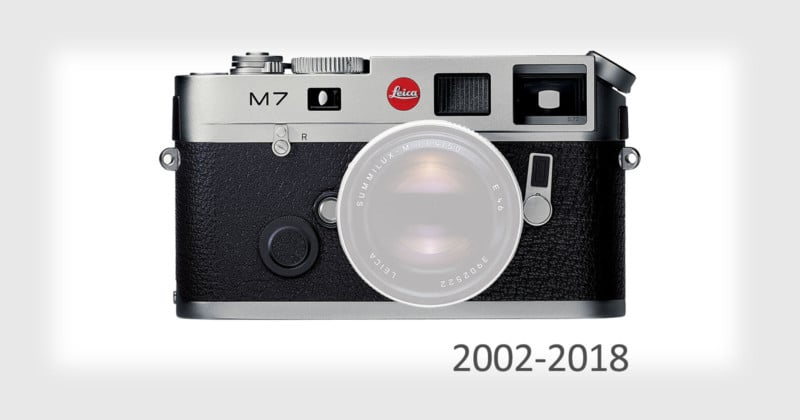 It’s the end of an era: Leica has discontinued the M7 film rangefinder, the last numbered M series camera before the Leica M8 brought the iconic line into the realm of digital photography.

Red Dot Forum reports that Leica has ended production of the M7 in both black and silver. And while certain models of the 35mm camera may still be in stock at retailers such as B&H and Adorama, new cameras will no longer be available once current inventories run dry.

“The same goes for the a la Carte program,” Red Dot Forum writes. “No M7-based configurations will be accepted or built for customers wanting a custom camera.”

The Leica M7 was introduced in 2002 as the successor to the M6. The camera brought auto-exposure in aperture priority mode, allowing photographers to set the aperture on their lens manually while having the camera automatically determine the appropriate shutter speed (using the new film DX encoding support to determine the film’s ISO). And while the shutter was electronically controlled, photographers could still use speeds of 1/60s and 1/125s mechanically even without battery power.

The two remaining film bodies in the M series lineup are the all-mechanical $4,800 MP (which has a light meter) and $4,700 M-A (which doesn’t have a light meter).

The Leica M-A was just announced in 2014 and the latest numbered M series model is the digital M10, which was unveiled in 2017. Although we don’t know Leica’s long-term plans with its film M series cameras, it seems likely that the M7 was the final analog model in the long line of numbered cameras going back to the original M3 of 1954.