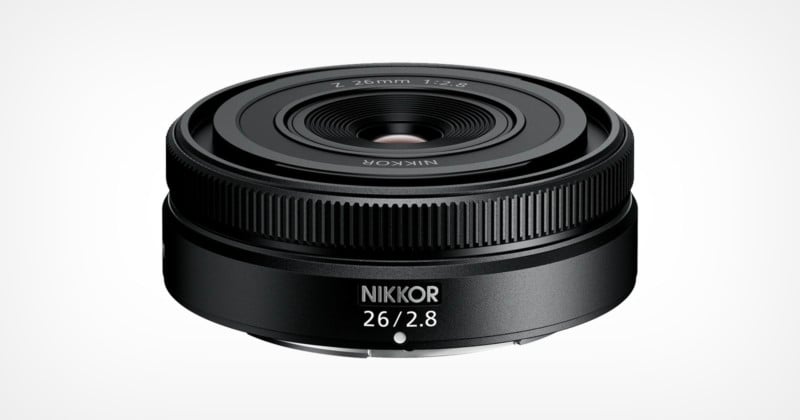 Nikon’s recent development announcement for a 26mm f/2.8 lens sent chills down my spine, exacerbated by its diminutive proportions. While maybe not the most important lens in their lineup, is any mirrorless system complete without one?

Looking at the latest (v5.2) lens roadmap, the 85mm f/1.2 is a top-shelf prime for its full-frame models and perhaps a critical addition for any portrait shooters, however the 26mm f/2.8 is a little more enigmatic not least because it is obviously a pancake lens with a modest minimum aperture and — probably — a simple optical formula.

Nikon does have a couple of svelte lenses in its lineup already, notably the full-frame 40mm f/2 and 28mm f/2.8. Intriguingly the 26mm f/2.8 is also indicated as full-frame which is unusual in and of itself. Normally wide full-frame lenses typically sit within the range of 16mm, 20mm, 24mm, 28mm, and 35mm. There is no space for a 26mm and it’s certainly odd, until you consider the lens sitting on an APS-C based camera: with a 1.5x crop multiplier then gives you a 39mm equivalent which neatly offers a “short normal.”

This is something that Fujifilm has long offered with its rather neat 27mm f/2.8 which was recently updated (62mm x 23mm, 84 grams). It’s a popular lens and for good reason, but to understand why, you need to dig back into the origins of the X-Series.

It’s perhaps odd to think that the first X-Series camera was not an interchangeable lens model, but the fixed lens X100. This introduced the broad design ethos and key technologies, pairing them with a 23mm prime lens to give a 35mm effective focal length and so creating the ultimate (at the time) compact camera. The X-Pro1 and X-E1 followed shortly after, with the 27mm f/2.8 one of the earlier lenses available.

The diminutive dimensions of X-Series cameras, paired with the 27mm, offered something similar to the X100 but for the interchangeable lens X-Series. For street and travel photography, particularly where size and space are at a premium, it was a good choice and well priced, although — for whatever reason — Fujifilm opted for the 40mm equivalent “short-normal.” The 2021 update brought weather sealing and a physical aperture (rather than fly-by-wire).

Fujifilm obviously isn’t the only serious mirrorless player that like this option, with Sony delivering a 20mm f/2.8 model (63mm x 20mm, 69g), going just that bit wider with a 30mm equivalent. Canon hasn’t yet entered this space, which isn’t surprising given that the APS-C R7 and R10 are relatively recent additions – and there appear to be no intentions at present, although Canon plays its cards close to its chest.

What the above shows is perhaps what we can consider a revival of the pancake lens. My interest was originally sparked a number of years ago when I stumbled across Nikon’s wonderful 50mm E-Series; E-Series lenses were designed to be modestly priced and compact (using simpler lens formulations) in order to match smaller film cameras. They were a refugee of 1970s photography and fell from favor, however what the 50mm shows is how svelte and unobtrusive you can make a prime. And how economical they can be. It is perhaps this spirit that lives on in the low-cost 50mm lenses of today, something that Canon has pursued for the R-mount but, strangely, Nikon hasn’t. In fact, what’s great about the 50mm E-Series is that if you pair it with an APS-C digital camera you get a half-decent portrait lens at a 75mm equivalent.

However, this does not explain Fujifilm’s and Sony’s interest at the shorter end of focal length primes and this is perhaps demonstrated by the growth of two genres. The first of these is street or travel still photography. The presence of fixed lens cameras – such as the Fujifilm X100 and Ricoh GR – highlight the small but sustained interest in diminutive models that are inconspicuous and easy to shoot with. They are about drawing the viewer into the scene, making them feel a part of the moment – their impact is visceral which is why street shooters love them. Quite what focal length you use is a matter of debate – and perhaps of style. If 50mm is considered “normal” and 24mm – probably – wide, then you want something in between. Quite what that “in between” is is up to you; the X100 is a 35mm equivalent and while the GR sports a 28mm equivalent, the GRIIIx (in parallel) offers a 40mm equivalent, just like Fujifilm’s own 27mm pancake.

The second genre is video: YouTube-style videos will often involve semi-wide shooting due to the nature of the material, but there are some notable movies that also tread this path. I won’t forget watching The Revenant for the first time and being blown away by the close-up, immersive, style.

Nikon’s announcement of the 26mm is welcome because it fills a gap in the pancake part of the roadmap, but it is also an enigmatic lens. It sits neatly next to the 40mm full-frame pancake, however it directly competes with the 28mm f/2.8.

The latter lens interestingly takes its design cues directly from the old E-Series and maybe it is this that is the odd one out. Is it a modern E-series: small, budget, and experimental? Of the three lenses, the 26mm is the first true pancake and is really very small. The 26/40mm offerings translate into 39/60mm on Nikon’s APS-C cameras.

What this doesn’t explain is the presence of the upcoming 24mm APS-C model although it’s likely it will fit in a different size and price bracket. Either way, this lens highlights that while top-shelf prime lenses — alongside the key zoom triumvirate of the 14-24mm, 24-74mm, and 70-200mm — are the foundations of a fully-fledged lineup, pancake lenses hold a pivotal place particularly given manufacturers’ new emphasis on video — and the 26mm f/2.8 is an exciting addition as a genuine pancake.