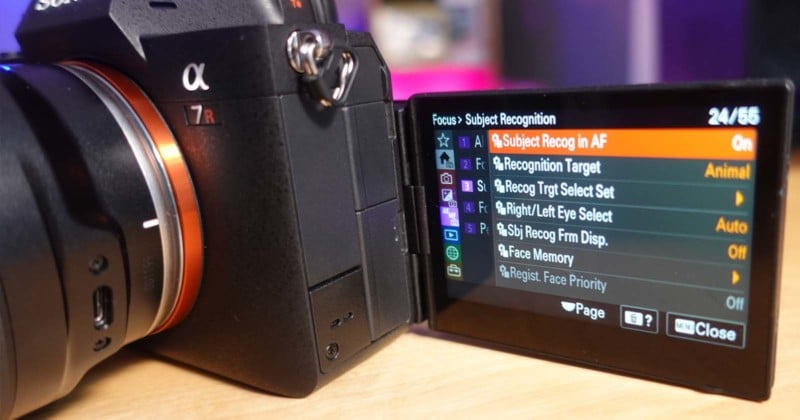 Sony’s Alpha 7R V has the company’s most advanced autofocus system that is remarkably powerful, but while the company has displayed its engineering prowess with Real-Time Recognition, it has also revealed its most significant weakness: interface design.

Sony’s menus have always been crowded and challenging to navigate, but that doesn’t mean we should be content with that, especially considering Sony made a design choice in the autofocus subject selection tool that, if not set correctly, will result in the camera searching for the wrong type of subject and missing shots.

I’ve been working with the a7R V since before it was announced and, now months later, I still find myself forgetting about this “gotcha.” Most recently, I stumbled over this problem after setting up a brand new a7R V.

Since Sony rarely changes interface elements after they’ve been implemented, this issue (and this advice) will likely apply to any future Sony camera featuring this new Real-Time Recognition tracking. 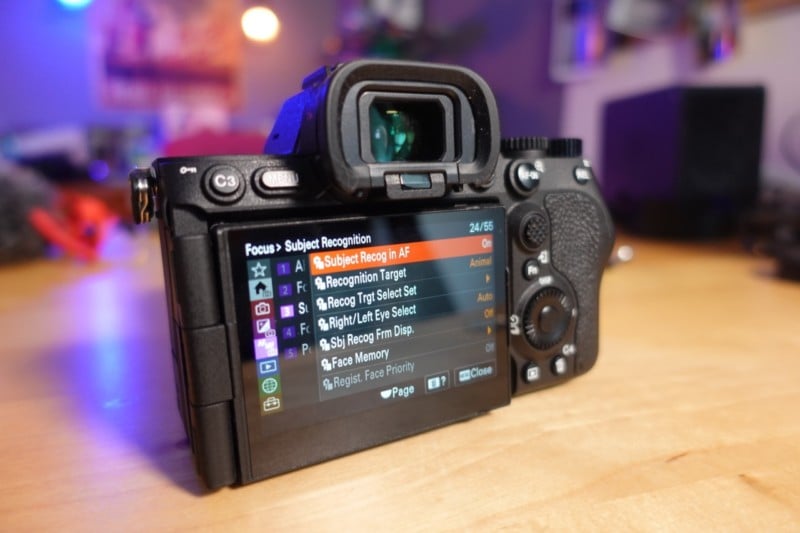 The problematic button, which I’ll cover shortly, is just one part of the confusing subject recognition system choices. I’ll talk about the second crucial menu option with an almost identical name and similar options, which, in my mind, should be part of the first menu.

This second menu also doesn’t function the same as other menus in which buttons you can use to dive into submenus, which I will also discuss.

In interface design, there are two ways to select and apply a change to a feature: autosave and confirm-to-save (These aren’t the technical programming terms, but the software developers I spoke to said this is how they usually think about it).

With autosave, any change is applied as soon as it is made, while with confirm-to-save, a button has to be pressed to apply changes. Almost all Sony’s menus are autosaved, but Subject Recognition Target Select Set (listed as “Recog Trgt Select Set” in the menu) uses confirm-to-save.

Subject Recognition Target is the menu that tells the camera what subjects the AI system should look for. Other menus in the system refine that selection, which I’ll also discuss as part of the subject recognition process.

Some of these instructions are based on trial and error, as Sony’s instruction manual doesn’t provide clarity. My conversations with Sony have included a lot of back-and-forths as we experiment with these new tools.

I’ll give these instructions assuming you have the touchscreen active, but if you have it off, use the joystick or the D-pad on the pack to access the sections.

The Subject Recognition Target Select Set menu is found in the focus setting section of Sony’s menu system. To access this, press the Menu button. 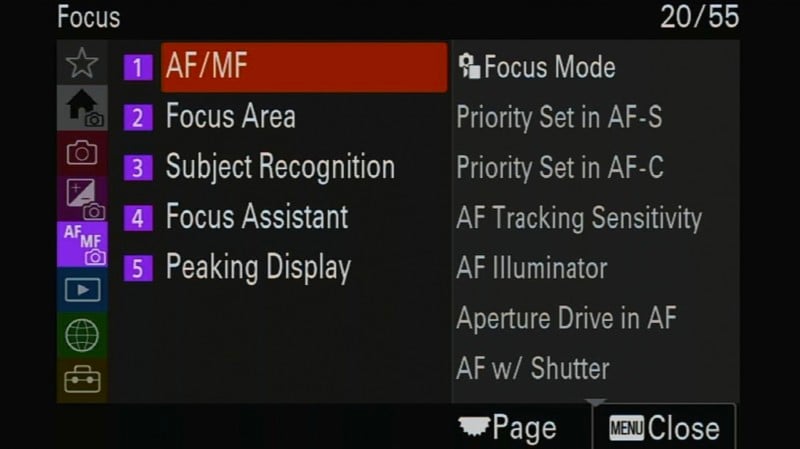 Tap on the pink AF/MF button on the left-hand side of the screen, then tap on selection 3, Subject Recognition. Next, tap on “Recog Trgt Select Set.” 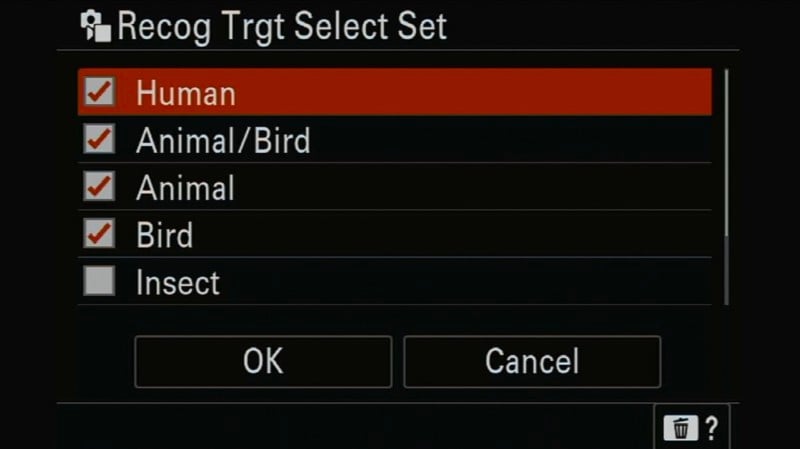 This menu has seven options, and unlike Sony options with radio buttons (the type of button choice where you can only pick one option), this screen allows for multiple settings to be changed at once.

A checkmark next to a subject means the camera will include that subject in its scene evaluation. The options are Human, Animal/Bird, Animal, Bird, Insect, Car/Train, and Airplane.

If you’re shooting portraits, you can (and probably should) turn off Airplanes, Car/Train, Insects, Animals, etc., because, in my tests, it appears that the camera will still evaluate for any of the active subjects, even if they’re not set as the active target– I’ll get to that in a moment.

Here’s the catch and the thing that has thrown me off: the camera does not save these choices until you press the OK button.

Selecting the OK button seems obvious, and if you’re taking the time to study the menus, it makes sense as the camera needs to know when you’re done with your selections, and this is a multiple-choice selection rather than an on/off selection. 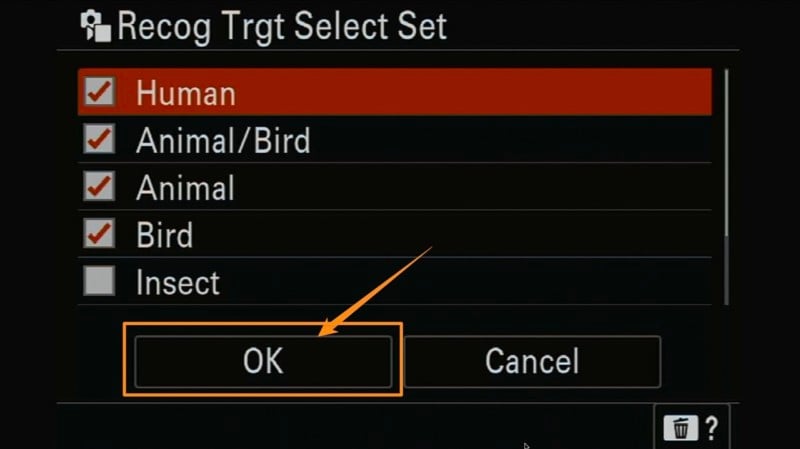 But this menu could just as easily save your settings as you make them, autosaving as you click the boxes, and allow you to exit the menu and have them set. Unfortunately, any exiting of the menu does not save your selections.

Pressing the shutter release counts as leaving the menu and will leave changes unsaved. This can be a mental roadblock for Sony shooters accustomed to accessing a selection and then half-pressing the shutter button to return immediately to shooting with that setting applied.

Even worse is that accessing the OK button without using touch requires scrolling down through the available choices to get to the OK button, and there are three subject types not displayed on the primary screen. This results in having to scroll down, scroll some more, and remember to hit “Okay.”

This has cropped up for me when I photograph a particular subject one day and then another. If I’m shooting aviation, I don’t need the AI system to evaluate animals, and I don’t want the system hunting for bugs.

I’ll get ready to photograph an animal and forget I had animals off. In a rush to get a shot, I’ll head to that menu, change selections, half-press the shutter, and lose my changes.

Of course, this is a user error, I should take the time to pay attention to the menu and to select my subjects before I get to the zoo, but that’s not how the real world works. Often you get to a shoot and start shooting and forget you did a non-typical change in a previous shoot.

Of course, this user error couldn’t happen if this screen auto-saved selections like most other camera menus do. 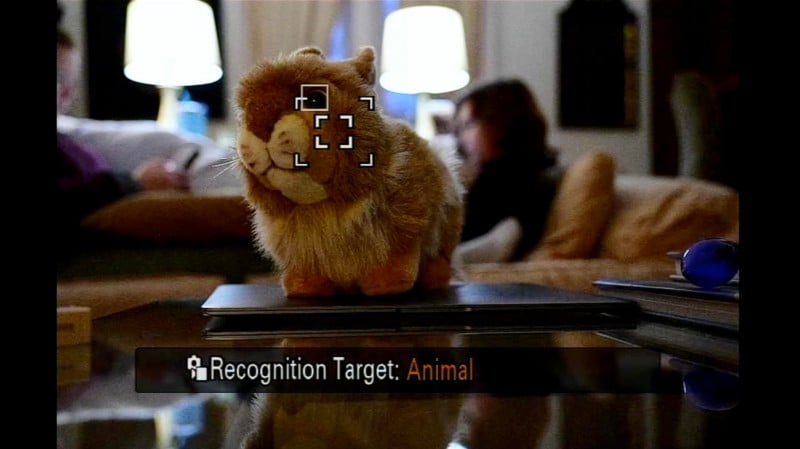 Suppose you leave all options checked in the Subject Recognition Target Select Set. In that case, you’ll need to toggle through each subject type, including those you have no intention of photographing when picking the Recognition Target.

In other words, if you want to switch between humans and birds and have only those two subjects actively selected in Subject Recognition Target Select Set. Only those two options are available when you press the custom key or the Fn menu button. Leave Airplanes, Cars, Animals, etc., on as subjects to recognize, and you’ll have to toggle through those to select the subject you want to photograph, even though they’re not subjects you’ll be photographing.

A final note on the Subject Recognition Target Select Set choices: The animal choices are Animal, Animal/Bird, and Bird.

Animal/Bird switches between the two depending on what it thinks the subject is (as far as I can tell). As a result, I’ve found myself at the zoo photographing monkeys and having the target subject set to birds, and I’ve photographed birds and seen it set to animals. 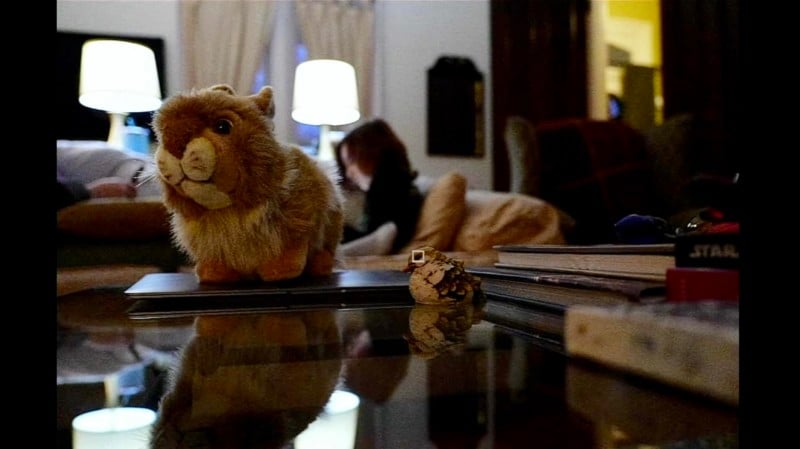 I’d recommend turning on just the individual bird or animal settings. The one advantage of using Animal/Bird is that it allows you to set the combination subject with one set of parameters for tracking sensitivity and body part detection while leaving Animal and Bird set to individually different tweaking.

There is an incredible array of customizability in the Subject Recognition menu, which is out of the scope of this piece, but essential to understand. Each different subject type has a deeper sub-menus for further customizing these subjects. 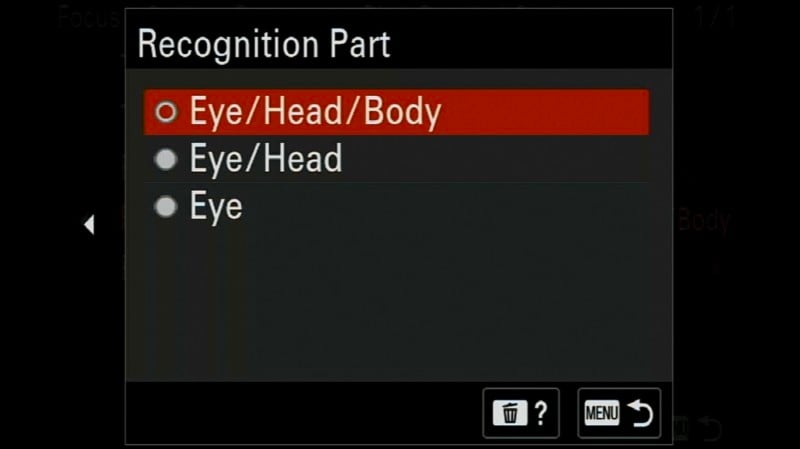 The most important is the Recognition Part, which tells the AI to prioritize the eye, eye/head, or eye/head/of animal subjects and humans.

I’m not sure why this menu exists.

When Sony introduced Real Time Tracking (the autofocus system that brought Eye AF to its mirrorless cameras), the company made it clear that the tracking would look for eyes, switch to the body if the eyes weren’t found, and switch to a body if the head became obscured.

I’m not sure there is a situation where I would want to focus on a bird but only look for the eye and not have the head and body tracked and evaluated.

Sony’s Real Time Recognition is excellent technology, but the menus to operate this system are a confusing mess. The mandatory Okay button in the Subject Recognition Target Select Set is the most counterintuitive feature, but even that aside the whole system is confusing and will likely reduce the photographic success rate when set incorrectly, making the power of the new AI-based autofocus seem less impressive.

If you’re investing in the a7R V — and any future Sony cameras with AI autofocus — spend time getting to know these menu options for the best possible experience.