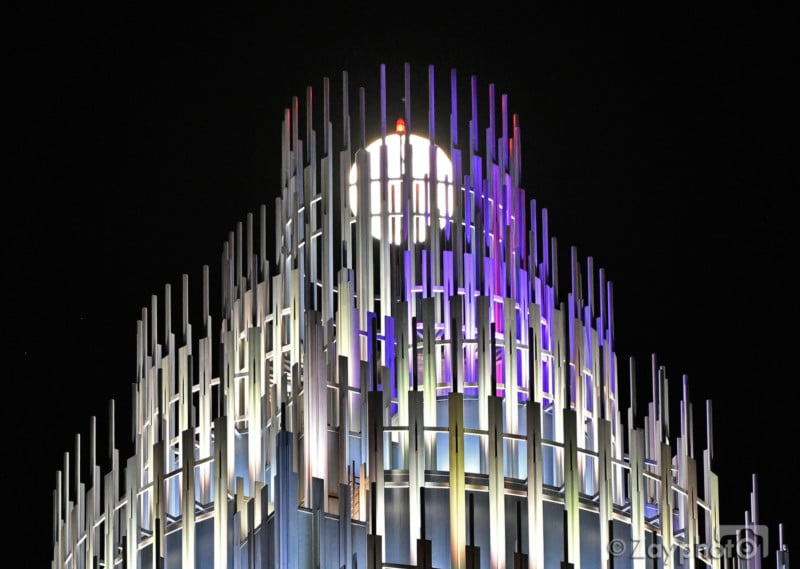 Charlotte, North Carolina, is nicknamed the Queen City, after Queen Charlotte. I moved to Charlotte from Frankfurt, Germany in July 1992. That was not just the year but also the month that the Bank of America (BofA) building was completed. The 871ft (265m) skyscraper is the tallest building in the Southern United States outside of Atlanta or Texas, with its “royal” crown on the top.

This past Friday afternoon I left my house, which is minutes from downtown, on an assignment about homelessness in winter for the news agency I’ve worked for since 2016. Not wanting to stand out more than necessary, I only took my main camera, Nikon Z9, with a 70-200mm f/2.8 in a Lowepro 75 AW II bag. No wide, no 300mm — let’s keep it lean and simple.

I was aware that it’ll be the night of the first full Moon of 2023. The night before, I told my daughter that it’s not every day that we have a full Moon on a clear night. Sure not every day, there are only 13 full Moons in 2023, but often they fall during a cloudy, rainy period. But, my thoughts and focus were on the assignment and I had to keep my eyes on the street level.

After about an hour and a half of walking the downtown streets, image #135 was the first one that I casually snapped of the rising full Moon at 7:18pm.

…and about five minutes later ‘walking’ with the Moon to get it closer to the Bank of America building :

Just a few months ago, I was shooting the Lunar eclipse for the same news agency. In the early hours of November 8th, 2022, I captured the blood moon with the BofA building. Another image from that project was published by an NBC affiliate: It was easy then, a Lunar eclipse is a blessing, the ‘heavenly operator’ dimmed the “lightswitch” so sunlight reflected off the Moon wasn’t as strong.

This time the idea was born: I wanted to find the crosshairs of time and space where the Moon is on top of the Queen’s Crown as a ‘crown jewel.’ The ‘chase’ was on.

What followed was half an hour of zig-zagging on foot in downtown Charlotte’s streets, full of tall buildings blocking my view of the Moon and BofA. I constantly looked around for a parking deck or some other place I could have a view. I used my planet finder app along with the moon app, and sure enough ended up pretty much at the same place I was when this all started, in Romare Bearden Park.

By this time, as half an hour had gone by, the Moon was considerably higher and just about over the top of the BofA building. Finally I “cornered” the Moon. At the park, I had enough space to move around to finetune the shot, aligning it just the way it needed to be. 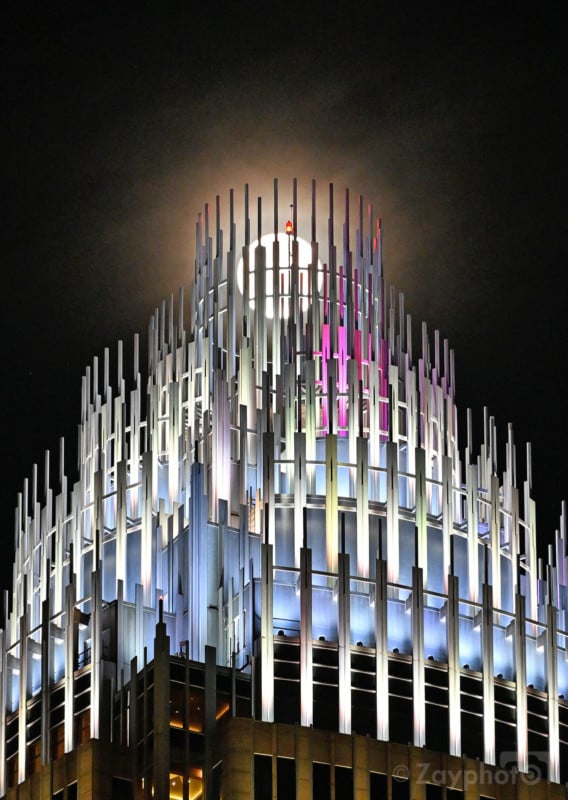 A pair with iPhones jokingly said: “You’re stealing our shot.” I already knew it: It’ll probably not look on screen after capture as it looks on the sky to the observer .” The brightness is deceiving, only appearing to be balanced.

As any who tried to capture the full Moon with almost any other object in view would know, what we easily see around the Moon — a star, a planet, a man-made object — would all but disappear when attempted to be captured, or the Moon is washed out. Gradation and tonal values can be a challenge. Ansel Adams and the Zone system came to mind (again).

When exposed for the building, no details in the Moon: (still looks alright, especially with the red aircraft warning light) 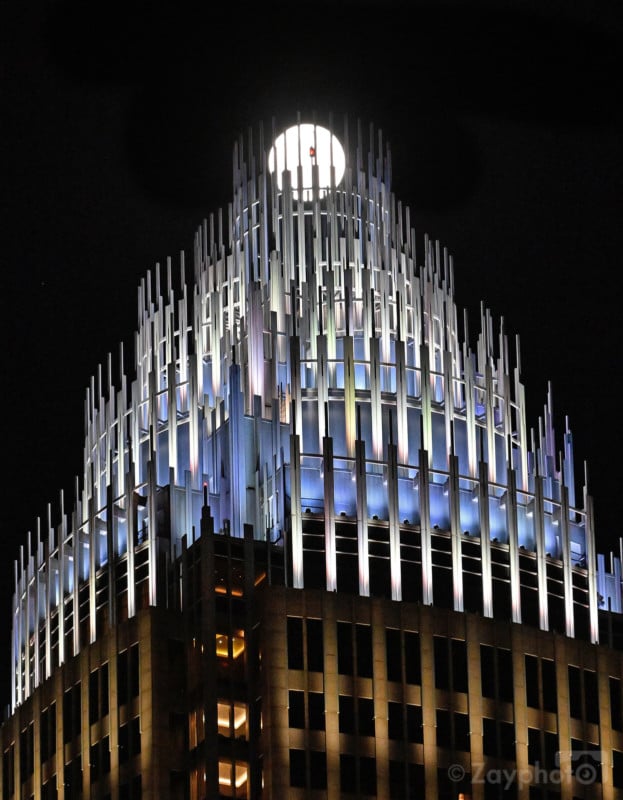 Another frame, different crop (same results and the blinking red light on): 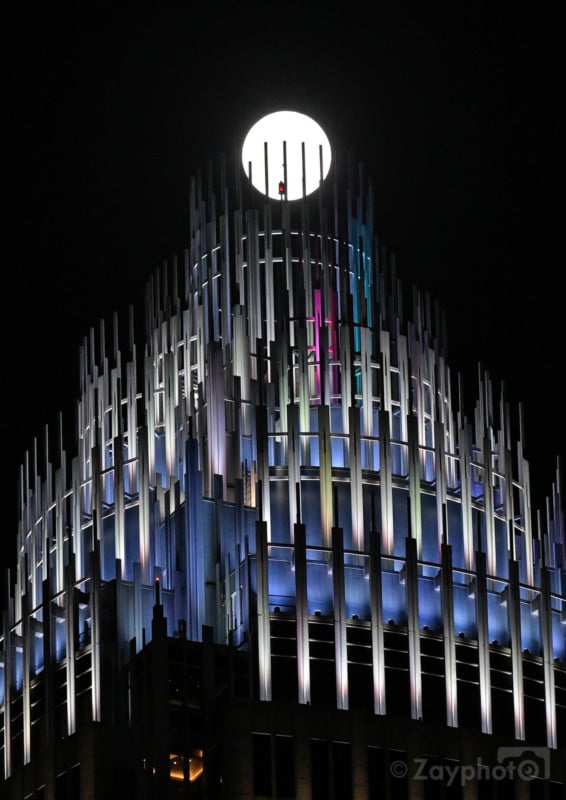 It’s (relatively) easy to photograph the Moon. There’s plenty of sunlight reflected from it. The main danger is to overexpose it, and if that is avoided, it’s fairly straightforward. Also, clouds can help, a thin layer like a diffuser can “take the edge off” and allow a good blending with the surrounding buildings.

For this purpose, a clear sky makes things worse. Once one attempts to shoot the Moon with another object, it becomes clear how almost everything is ‘pale’ next to the Moon. You can expose for the Moon, then even with the Nikon Z9’s great latitude, the rest of the frame will be dark as a tunnel. Or, you can expose (in this case) for the building, and the Moon will be just a white circle. It’s hard to bridge the gap, but I tried.

I employed Nikon’s D-lighting to help with contrast, from Low to Normal, to Hi, and even Extra high1.

This video is probably the best visual representation, I captured it after my stills. As the 16 sec. video starts, the aperture is at f/22 and at the end of the sixteen seconds it’s at f/2.8. Dear reader, please forgive me for the camera shake — I should never leave home without a super-telephoto lens and a tripod.

I employed the newly available (firmware 3.0 I believe) digital zoom feature, so the focal length is starting at 400mm. My elbow resting on a trashcan, but my index finger manipulating the Fn button on the front for aperture and the thumb on the rear multi selector for the digital zoom creates unavoidable shake. Despite its imperfection, it illustrates that when there’s the right amount of light reaching the sensor to capture details in the Moon, the top of the skyscraper is invisible, as the aperture brightens it slowly ‘comes to light’, but then it’s too late for the Moon.

There are lots of ways to get the job done. As far as my madman dash, I know there are apps where you can pinpoint ahead of time where to be and when. Maybe I’ll invest in it, but I enjoyed the spontaneity and ‘chase’. And as far as contrast/brightness, there are different techniques. As a journalist, authenticity is important to me, and image manipulation is limited. I’ve put this into a three-tier, three-level approach:

1. As shot, a single frame at a time (only adjustments of levels, brightness, shadow, etc., as expected when adhering to journalistic standards).

2. Bracket, (still as is, as it was, maybe the most as it looked but requires multi frames and not how photography ‘sees’ it)

3. Composite, superimposed, blended images combined (most freedom, and it’s artistic, tempting, and easy to manipulate the Moon’s size, but can end up not as it was observable, not reflecting reality.)

An example of what I was able to achieve with a single image — the Moon on the edge of being too bright and BofA still appearing very dark: An example of bracketing (better-looking results): Stronger crop, yay! details in the celestial and in the manmade object: 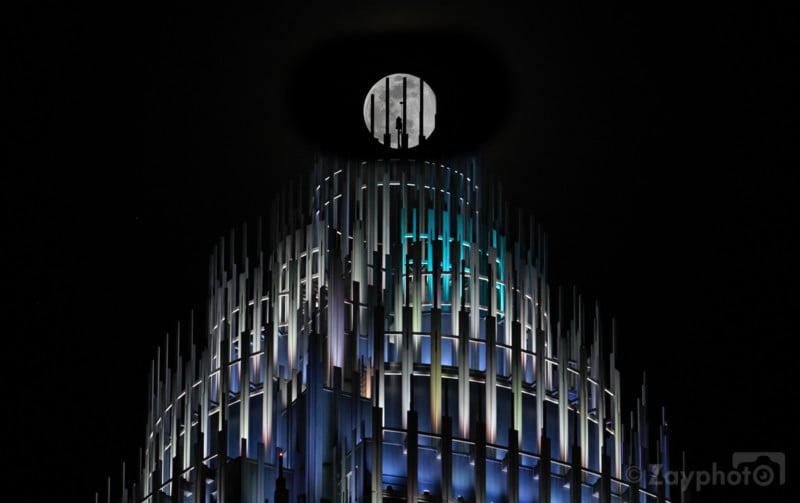 Even back in the film days, one could easily create these ‘double exposures.’ It was only two weeks ago that I showed and explained the “multiple exposure lever” to my other, younger daughter as I gifted her my Nikon FA from 1983. (I’m happy that young people are into film and appreciate older cameras).

As it all came together, Moon in the ‘basket’, or I should say the crown jewel on the crown; elbow steadied on a trash can, zoom maxed out on 200mm, I’d have loved my 800mm to magically appear along with my tripod. No time to run home, or even beg family to do a favor. All was left to enjoy the moment and the experience.

About the author: Peter Zay is a passionate professional photographer and educator based out of Charlotte, North Carolina, in the United States. He has been a member of the International Federation of Journalists since 1986 and a correspondent for the international press agencies Anadolu Agency and Getty Images. You can find more of his work on his website, Facebook page, personal Facebook, or Instagram.