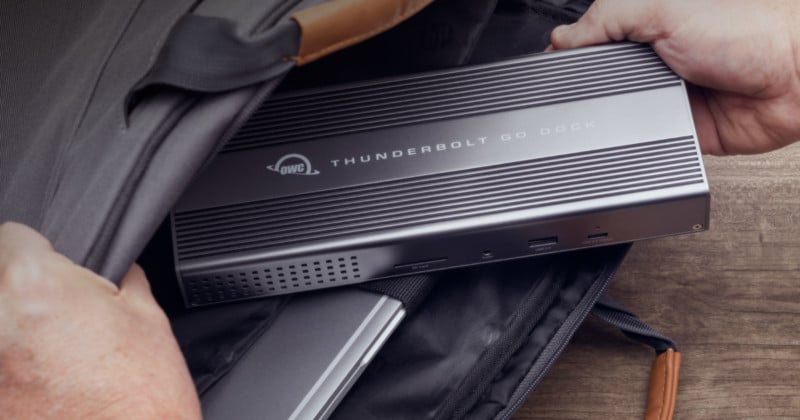 OWC has announced the Thunderbolt Go Dock, a fully-featured peripheral that includes multiple USB and Thunderbolt 4 ports, Ethernet, HDMI, an SD reader, and a headphone/microphone jack without needing a bulky power brick.

The company says that the Thunderbolt Go Dock is a first-of-its-kind product and the only portable dock on the market that allows for professional connectivity without needing a big power brick and at the same time does not have the performance limitations of bus-powered docks. Instead, the power supply is built into the dock itself.

“With aircraft-grade heat-dissipating aluminum design and 11 ports to meet any workflow demand, the Thunderbolt Go Dock is the perfect solution for on-the-go professionals who need connectivity without compromises,” the company boasts.

The front of the Thunderbolt Go Dock features an SD card port, a dual audio/microphone 3.5mm jack, a USB-2.0 port, and a USB-C 3.2 10 GB/s port. On the rear of the dock there is even more connectivity: a full-size HDMI port that supports up to 8K (the company did not disclose if it is HDMI 2.0 or 2.1, however), two Thunderbolt 4 ports, Ethernet, and two USB Type-A 3.2 10Gb/s ports. While the Thunderbolt Go Dock does require power via a wall outlet, it does so with a simple thin cable since, as mentioned, the power supply has been built into the dock itself.

“The elimination of those big, bulky power adapters has always meant customers had to accept lower productivity for portable docks,” Larry O’Connor, founder and CEO of OWC, says. “We’ve developed our Thunderbolt Go Dock with virtually every modern accessory and need in mind to provide connectivity empowerment no matter when or where users need it.”

OWC’s Thunderbolt Go Dock is compatible with any Mac, PC, iPad, Chromebook, or Android device and the company says it is ideal for those seeking additional ports and functionality or faster Ethernet file transfers (of note, it is 2.5G Ethernet which OWC says is over twice as fast as a standard 1G Ethernet connection), notebook charging (thanks to its 90W power delivery), and memory card ingest (2.5 GbE/s). It is also equipped with OWC’s Dock Ejector software that it says allows it to safely disconnect multiple drives at once in a single click.

The OWC Thunderbolt Go Dock will be available to pre-order on OWC’s website starting this week for $399. The company says it expects to start shipping units starting in April 2023.