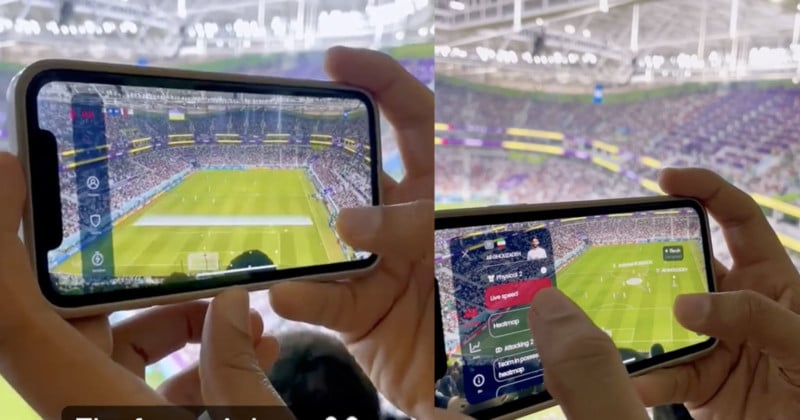 Fans attending World Cup games in Qatar can now see live stats for the players in front of them by pointing their smartphones at the pitch using augmented reality (AR).

The FIFA+ app scans the pitch and recognizes each player, displaying the names and statistics of the individual. It also offers fans to view VAR replays and alternate camera angles.

Only fans inside the stadium can access the FIFA+ Stadium Experience. TikTok user Nazwif displayed the app’s capabilities during the United States versus Iran game in a viral video.

In it, Nazwif points his smartphone camera at the pitch and taps the “Start Scanning” button. After a few seconds, it comes back with “Pitch recognition successful. What wile we prepare your AR experience.”

Afterward, Nazwif clicks on Iranian player Ali Gholizadeh where his live speed is displayed. There’s also an option to see the player’s heatmap.

ESPN FC hailed it “The future of watching football is here.” However, others were less impressed with one user writing “just watch the game and enjoy the atmosphere.”

“We would like to share our vision of using football data analytics combined with technical expert interpretation to create a new football intelligence, allowing everyone to better understand the game,” adds FIFA Chief of Global Football Development Arsène Wenger.

As noted by Engadget, the app could come in useful for VAR (short for video assistant referee) replays for those inside the stadium unsure about what is happening.

For armchair fans, commentators explain VAR decisions that come complete with replays. For example, Japan’s winning goal against Spain on Thursday was initially disallowed by the on-field referee because he deemed the ball had gone out of touch. But VAR overturned the decision after a video replay showed that a sliver of the ball had remained in bounds. The VAR is operated by a group of remote officials.

Fans have complained that VAR decisions can be confusing for people inside the stadium who don’t know what is happening, the new AR app may change that.

The FIFA+ Stadium Experience is found inside the free FIFA+ app.