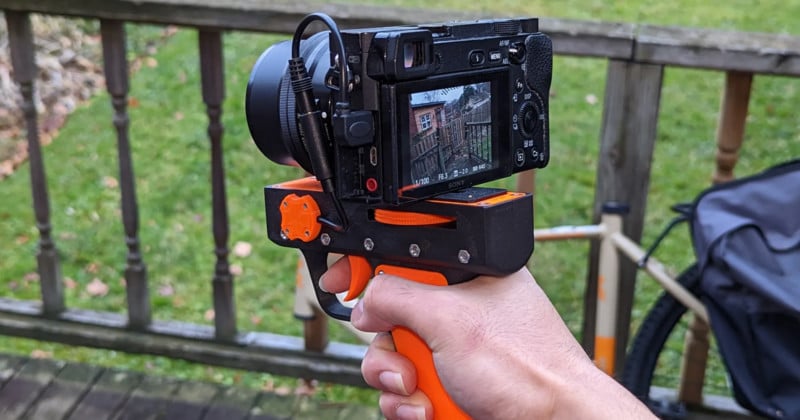 A Redditor’s 3D-printable pistol grip for cameras takes the phrase “point and shoot” and makes it a lot more literal.

Spotted by DPReview, Reddit user TH1813254617 — who goes by Tomcat — has created and shared a 3D printable pistol grip that can trigger a small mounted camera. According to Tomcat, the current state of the pistol grip is a work-in-progress and his plan is to create a modular photo rifle that includes a buttstock add-on for extra stability and weight support for longer lenses. The entire affair is inspired by the Soviet photosniper.

“The Photopistol is my attempt at recreating the old Photosniper lens kit from the Soviet Union. It turns any lightweight camera that supports a wired shutter release into a literal point-and-shoot camera. The build guide and required materials are included in the zip. You’ll need quite a few M3 nuts and bolts, a pair of JL012-13.5-2 microswitches, and some soldering skills,” Tomcat says on the Printables page for the project.

“This is currently a work in progress,” he continues. “Do not use this for heavier lenses, wait for the photorifle.”

According to the project page, the current aptly named “Photo-Pistol” is comprised of 17 different 3D-printed parts that will need to be assembled into a finished grip. The aforementioned required soldering skills are required in order to make the trigger work for firing the camera. Detailed schematics are not yet available, but the files are available to download for anyone to mimic the build.

The original Soviet Fotosniper system was made up of a variety of different models and systems. Initially designed for military use to allow soldiers to capture better reconnaissance photos out of their emplacements.

The system typically employed a 300mm f/4.5 lens for long-distance captures and has had multiple versions and models of cameras mounted on it over the years. Eventually, the system was made freely available as a camera for amateurs, wildlife photographers, and even paparazzi.

While photo-sniper-like products still exist on the market today — and an extremely rare one made for Contax cameras called the Zeiss Ikon rifle 543/75 sold for about $134,436 last year — a new 3D-printed version does make getting one easier and more affordable.

Tomcat says the current design is still going through its prototyping phase but the files are nonetheless available to be downloaded.