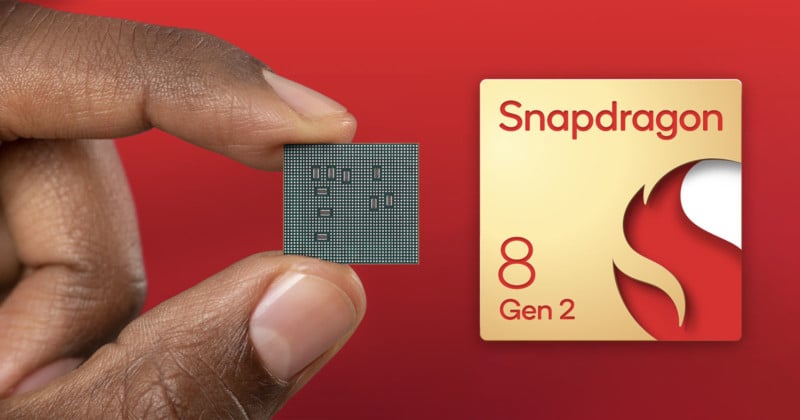 Smartphones have gotten to the level of quality they are at not just because the sensor hardware is improving, but also because software and processing has gotten a whole lot better. So why aren’t camera makers taking advantage of this technology?

Outside of Apple, just about every major smartphone manufacturer is driving their smartphones using Qualcomm’s Snapdragon chips. All the brains of how it works and what it does with photos are commanded from this one little processor and over the last few years, what it has been able to do has grown by leaps and bounds.

Yesterday, Qualcomm announced the latest generation Snapdragon chip that will add even more capability to devices that are going to be announced as soon as the end of the year. The chip is advanced enough that it can drive a 200-megapixel sensor, can playback 8K video at 60 frames per second, and can automatically enhance photos and videos in real-time with a process the company calls semantic segmentation.

In short, Qualcomm’s Snapdragon chip is why so many smartphones take photos that are very much starting to rival the image quality of full-size cameras.

As good as smartphone software gets, they’re still using sensors that are significantly smaller than those found in standalone cameras. By that logic, should the technology powering those devices continue to advance at nearly the same pace, no matter how good a Snapdragon processor is, it could never match the imaging potential of a dedicated camera.

But the thing is, the technology driving standalone cameras isn’t evolving that fast. Over the last few years, the gap between what a smartphone can do and what a dedicated camera can do has been shrinking. For whatever reason, camera makers — even those who already buy Qualcomm chips for their smartphone lines (like Sony) — refuse to take advantage of these computational photography gains in full-size cameras that Qualcomm regularly makes available.

From the outside looking in, surely there must be some reason that Snapdragon chips aren’t being used in cameras. Something is holding camera makers back, right?

“No, there is nothing stopping this. In my opinion, Snapdragon is already more powerful than the APs/ISP chips in any camera body today,” Judd Heape, Vice President of Product Management at Qualcomm tells PetaPixel.

Heape says that if a camera maker were to integrate a Snapdragon chip into a camera, those devices would see huge gains over what is currently available.

“[Standalone cameras would gain] many things,” he says.

“A much more advanced and powerful CPU, GPU, DSP, and ISP – all in the latest process geometry; a platform connected via WiFi, 5G and Bluetooth; superior audio performance; a more advanced GUI, [and more].”

Currently, all camera makers develop their own silicon in-house and use it to power their devices. But given that Qualcomm has been making and developing more powerful chips year after year, why do camera manufacturers insist on continuing to make their own, less powerful processors?

It Doesn’t Have to be Android

One reason that some camera manufacturers might not want to pick up Snapdragon is that it may require completely rebuilding a camera’s operating system. Some camera makers already struggle with making an easy-to-use menu system (looking at you, Sony), so rebuilding one from scratch would be a major undertaking.

Additionally, some might believe that they would have to run a camera on Android, which wouldn’t be necessarily ideal. But Heape says that isn’t the only option.

“Most companies would likely prefer not to use Android, as they want more of a familiar ‘instant on’ experience and custom UX implementation. Linux is a possibility in some cases, or in other cases, camera makers may want an OS solution that’s even simpler,” he says, indicating there is no such limitation to using an OS that a camera maker isn’t comfortable with.

This idea of a smartphone and camera hybrid is hard to discuss without looking at the most recent failure of such an idea: Samsung’s NX system. While Samsung never made an official announcement, the NX system quietly died off between 2015 and 2017.

While Samsung was ultimately unsuccessful, it’s hard to say that was because of the operating system, which fused a traditional camera menu with one that looked a lot like Android. Heape says that Samsung’s lack of success there was probably more linked to how hard it is to start a new business segment than anything else.

“I think it’s hard to bring a ‘cross over’ product into the camera market landscape. Now, the market is essentially bifurcated into two pieces: the pro mirrorless market and the smartphone market,” he says.

“Putting something in between is hard… it may not be as flexible as a pro mirrorless camera (with interchangeable lenses, a full frame image sensor, etc.), and it also isn’t as connected, portable, and ‘always with you’ as your smartphone is.”

The issue that camera makers are going to come up against is that bifurcation, which for consumers has already created this idea that they have to pick between them.

Smartphones Aren’t Going to Slow Down

There is no evidence that smartphone manufacturers or Qualcomm are going to slow down the pace of technological advancement and let camera makers catch up. If Sony, Canon, Nikon, OM Digital, Panasonic, and Leica aren’t careful, they’ll find themselves too far behind to recover.

“As we continue to improve image quality on smartphones, I think this bifurcation intensifies. If you’re not the type of person or if you don’t need to carry/use a pro mirrorless camera, then for everyone else the smartphone camera now more than satisfies the image quality and ease-of-use bar,” Heape says.

Arguably, full-size camera makers may have waited too long to bring smartphone features to their devices, but even if it would have been best to do this years ago, the second best time would be today. Heape seems to think that is certainly is a possibility, and there really isn’t anything stopping companies from doing it.

“While this hasn’t happened yet, I wouldn’t rule this out in the future. As the pro camera market shrinks in volume, it’s more and more difficult for camera companies to invest in and develop their own silicon. I think it’s a matter of time.”