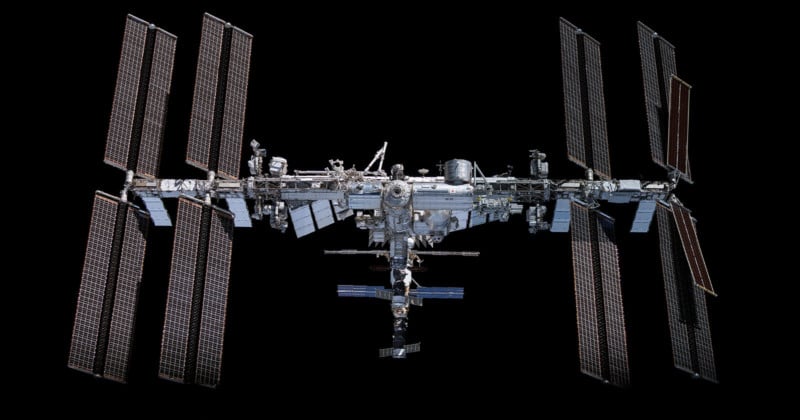 The actual specifications of the camera have not been released (other than the statement that it is the most advanced, highest resolution camera that has ever been sent to the ISS), but the footage this camera system will capture will be used inside of a new massive venue called the MSG Sphere.

The MSG Sphere — operated by Madison Square Garden Entertainment (MSG) — is a new entertainment medium and “multisensory platform” designed to deliver “immersive experiences at an unparalleled scale” that is set to open in Las Vegas at The Venetian in 2023.

Once complete, it will be the largest spherical structure in the world with an exterior exosphere that features a fully-programmable 580,000 square-foot LED display and the largest LED screen on Earth. A quarter-scale example of this massive sphere is currently sitting at the company’s headquarters in Burbank.

Inside, the venue will house the world’s highest resolution LED screen: a 160,000 square-foot display plane that will wrap up, over, and behind the audience at a resolution over 80 times that of a high-definition television with approximately 17,500 seats and a scalable capacity up to 20,000 guests.

“Our vision with MSG Sphere is to create immersive experiences that transport audiences to new places, and there are few landscapes more awe-inspiring than space,” Andrew Shulkind, MSG Sphere Studios’ Senior Vice President of Capture and Innovation, says.

“The insights and imagery we gain from this first mission will be invaluable to prepare our groundbreaking camera technology for working in space, and push our collective understanding of Earth and deep space. We are thrilled to be collaborating with Nanoracks, CASIS and NASA on this project, which we believe will not only benefit the extraordinary vision of MSG Sphere, but also set a new bar for ultra-high-fidelity imaging.”

Capture and technology teams from MSG’s Sphere Studios are set to collaborate with Nanoracks and the Center for the Advancement of Science in Space (CASIS) — which manages the ISS National Lab — to work with astronauts on the space station across three missions to validate custom camera technology being developed for the state-of-the-art MSG Sphere venues.

The coordination of this endeavor means that it’s not just MSG that will benefit. The ISS National Lab is working together with NASA to maximize the utilization of what MSG is characterizing as an “orbiting laboratory” that will bring value through space-based research and technology demonstrations. Nanoracks installed and manages the first commercial airlock on the ISS and is designing a commercial space station to succeed the ISS after it is decommissioned. Nanoracks is certifying the camera for in-space use, integrating the camera for launch and will facilitate operations on the ISS to test MSG Sphere’s capture technology.