360 and Virtual Tour photographer Ben Claremont recently demonstrated the incredible power of AI-photo editing by transforming a 360 image from 2015.

Claremont ran his first-ever 360 photo taken on a six-megapixel Theta M15 seven years ago, and ran it through Topaz Photo AI.

The results are truly astonishing with the photo being metamorphosed from a grainy, blurry image to a reasonably sharp one.

“Photo AI works so well that you can literally take seven-year-old 360 photos and make them look like you shot them five minutes ago with today’s technology,” Claremont tells PetaPixel.

Its new photo AI, and the one that Claremont used, combines the tech from all three of these programs into one editor that is smart enough to deal with image quality issues on its own and en masse.

“As a 360 photographer, everything changed the day I discovered the previous Topaz products, DeNoise and Gigapixel,” Claremont explains on YouTube.

“360 photos are not exactly known for being sharp and smooth but with a few clicks of a button and the moving of a slider or two I discovered I could instantly double the image quality of my virtual tour shots even with older photos taken several years ago.” 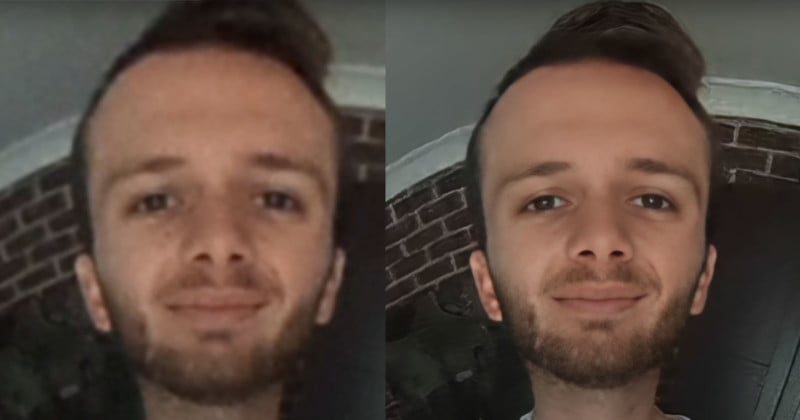 In the above video, Claremont goes through how the AI treats various subjects and the results that can be achieved.

“Overall I do like where Topaz is going with Photo AI but I still think it’s very early days and it’s not an obvious upgrade at this point in time,” he says.

“There are obviously other apps outside of Topaz products that can achieve similar results so it’s definitely not a one-horse race.”

AI-photo editing has really picked up pace recently. Putting aside AI-image generators, in 2022 all updates to major photo editing applications have been machine learning-driven.

Just last week, Adobe confirmed they were working on an AI feature that will automatically blend different photos into one convincing composite with a single button press.

Called “Project Clever Composites” and revealed during the company’s annual “Sneaks” presentation at Adobe MAX, it will harness AI to predict the object’s scale, blend the colors of the objects, estimate the lighting conditions, and generate the necessary shadows to make it look realistic.