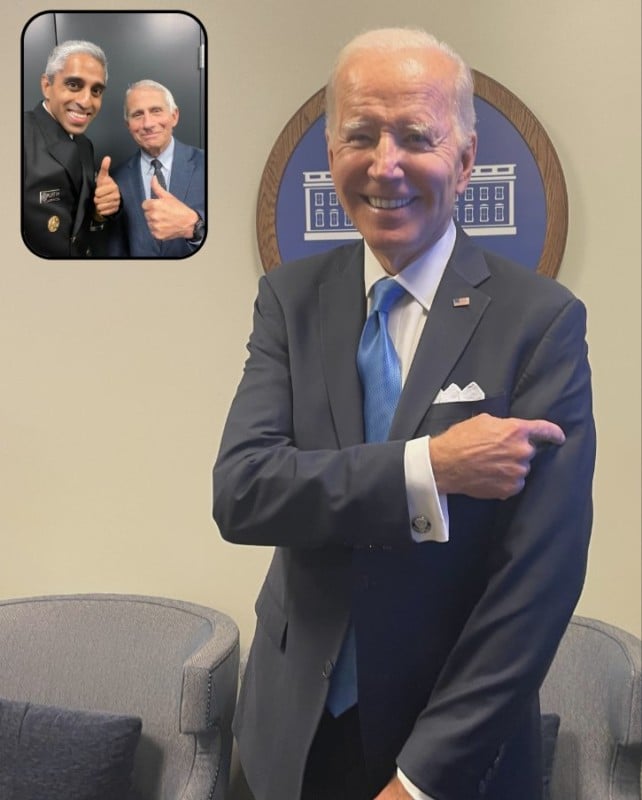 President Joe Biden used photo-sharing app, BeReal to encourage people to get their annual vaccines in before flu and covid season.

On Wednesday, the President’s official Twitter account shared a photo of Biden using the definitive BeReal dual camera and format.

Got my annual, updated shot today. You should get yours too, for real. https://t.co/jlrmakxHWm. pic.twitter.com/S7lCTSjMaK

In one image taken on the back-facing camera, Biden is seen smiling and pointing to his shoulder. Biden received his latest COVID-19 vaccine on Tuesday, making it his third coronavirus booster shot and his fifth vaccine dose.

In the second, smaller image taken on the front-facing camera, Chief Medical Advisor Anthony Fauci and United States Surgeon General Vivek Murthy are seen posing together with their thumbs up.

The President even humorously references the photo-sharing app in his caption: “Got my annual, updated shot today. You should get yours too, for real. Vaccines.gov.”

It is unclear whether BeReal was actually used to create Biden’s photograph. However, it is clear that the President’s social media team is trying to keep up with the times, and the soaring popularity of the photo-sharing app.

BeReal, a photo-sharing app dubbed the “anti-Instagram,” has had a meteoric rise in the past year. Set up as the antithesis to Meta-owned apps, BeReal only allows users to post one photo per day and only at a randomized specific time.

When the shutter button is pressed, BeReal simultaneously captures two images using both a front and rear-facing camera making it impossible to hide behind the main camera. This bi-directional capture feature means that viewers get a complete snapshot of what the poster is up to at that moment.

On Monday, it was revealed BeReal had secured $60 million in funding, pushing its valuation to just under $587 million.

The latest valuation brings BeReal’s value to $100 per daily active user, which is more than double that of a Snap or Pinterest user.