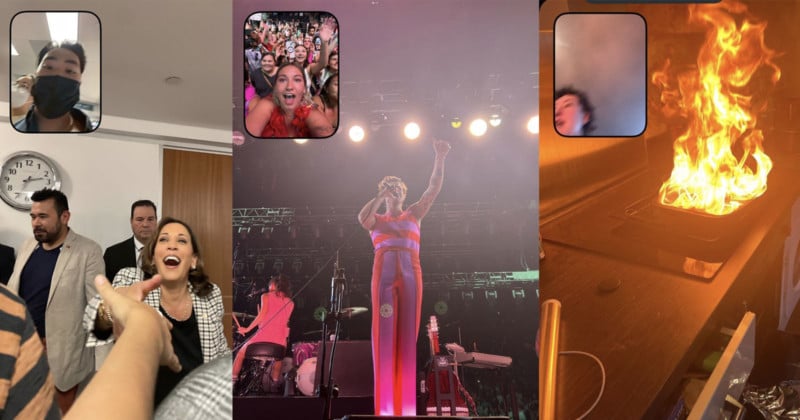 With BeReal’s meteoric rise this year, photographers have been wondering whether there is any future potential in the app as a social media platform to promote their work.

In BeReal’s description on Apple’s App Store in the U.S., where it continues to dominate the number one spot, the company proudly claims that its app “won’t make you famous,” and “if you want to be an influencer then you can stay on TikTok and Instagram.”

But that has not stopped people from trying to establish an early presence on BeReal and go viral with their images on the photo-sharing app.

Of course, there have been major brands that immediately jumped on the BeReal bandwagon and have since become sensations on the platform. For example, Chipotle joined BeReal in April and shared 100 promo codes, for a free entrée which were all used in less than 30 minutes.

So brands have infiltrated BeReal, a platform that categorically forbids the use of accounts for commercial purposes.

Did they ruin it yet?

Here's Chipotle's ad — you be the judge of it pic.twitter.com/w0zu6q1Md0

But it is still difficult to gauge which BeReal posts have become the most widely shared photos on the platform. The number of friends a user has is never revealed on the app. And the only visible sign of popularity is if someone’s BeReal post has multiple RealMoji reactions.

However, it becomes more clear which posts have become wildly popular on BeReal and gained viral status when browsing social media in general.

As PetaPixel reported last month, in the time that Instagram has shifted ever further away from its roots as a photo-sharing app, Generation Z has found a new space to post their favorite images — and that’s TikTok.

One of the biggest photo trends on TikTok currently sees users sharing their most popular BeReals on the app and the host of Realmoji reactions to it.

According to TikTok, a sure-fire way to make a BeReal shareable is for a celebrity to feature in that user’s daily photos, whether that means getting the app notification while watching Kendrick Lamar perform at a packed show or front row at a Justin Bieber concert.

There is also a popular trend of getting an unassuming stranger to take a BeReal photo on the user’s behalf and the person’s face is captured by the dual camera.

But, the real allure of BeReal for users is the premise that they can only post their one photo within a two-minute time frame at a randomized time each day and there is no knowing when that random prompt from the app will be.

According to TikTok, some of the most popular BeReals have been borne out of users getting that notification at a life-altering or awkward moment that day and authentically sharing that experience in a photo.

A photo of a woman is getting dumped by her boyfriend when her BeReal notification goes off has 3.6 million views on TikTok. Meanwhile, a user’s BeReal post of her family member’s casket being lowered into the ground at a funeral has over 11.4 million views.

A TikTok user also shared her BeReal post at the exact moment she found out her house had burned in a fire, a video which has racked up 6.2 million views. Another viral video show a user getting her Bereal notification during a first date has been viewed 6.9 million times.

Some of the other most shared BeReal posts on TikTok simply include getting a notification from the app simply at the perfect photographic moment. For some users, that is getting as shot while in an idyllic location or managing to do the BeReal photography “trick shot.” The hack involves users throwing their phone into the air or jumping off the ground and getting the front and rear-facing camera to capture them twice.

Thanks @lilbibbs_ Most engagement ive had on be real

♬ I just came to say AY YO by Boxout – Boxout

People have also been resharing the most popular BeReal posts on Twitter and the formula is similar. A BeReal user’s photo of their kitchen catching on fire has over 732,000 likes on Twitter. Another photo of a surgeon allegedly getting his BeReal notification as he is performing an operation has 82,000 likes on the platform.

this is the craziest BeReal I ever seen😭 pic.twitter.com/S5oO6Tubj5

There is a BeReal photo which features Vice President, Kamala Harris that has been widely shared online. A photo taken by BeReal user TrinnyF at a Harry Styles concert has also been been dubbed by viewers as the “best ever” online.

I’m wait too committed to the bit @BeReal_App @KamalaHarris pic.twitter.com/l9bXKZRAu6

A photo taken by a Penn State Nittany Lions football player as he seemingly gets a BeReal notification just before during a game has also racked up thousands of likes across social media.

Some critics have dubbed the concept of BeReal as boring but judging from the viral posts, it is the fact that creating “Instagram-perfect” content every day is near impossible which makes the app so compelling for users.

While the majority of BeReal posts may appear to highlight the mundanity of daily life, the most viral posts are those unfiltered, rare photos that show the absurd and out-of-the-ordinary things that can happen in the everyday.

For BeReal users, that is the power of sharing just one authentic photo at a different time each day.