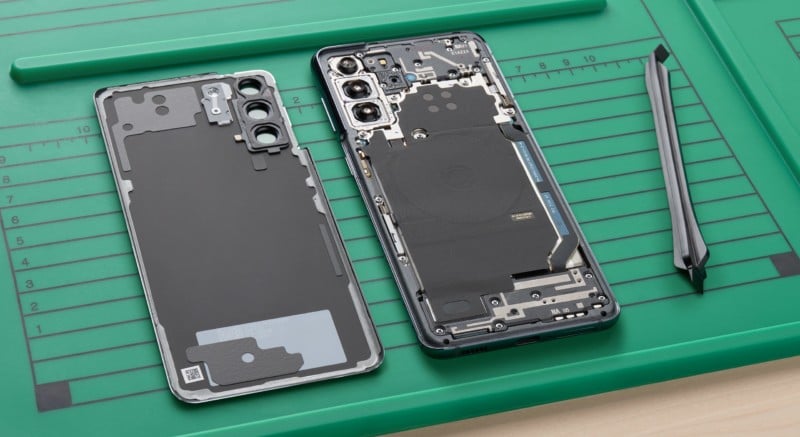 Samsung has launched the Galaxy devices self-repair program that it operates in conjunction with iFixit. Starting today, device owners can replace the screen, back glass, and charging ports for Galaxy S20 and S21 series phones as well as the Galaxy Tab S7+.

The repair program was announced in March and will supply Galaxy device owners with access to genuine parts and repair tools as well as easy to understand repair guides and included shipping labels to send Samsung old or damaged parts.

Samsung says that this program is part of its nationwide “customer-first care experience” and reinforces Samsung’s commitment to making everyday changes that leave a meaningful impact on the environment by promoting a circular economy to reduce e-waste.

“This program complements Samsung’s continued expansions for convenient repair for consumers and reinforces Samsung’s commitment to empowering consumers with sustainable solutions to support a more circular economy by extending the life of their devices,” the company says.

Samsung says it plans to expand the self-repair program to include more devices and repair options, but stopped short of providing specific plans for that expansion.

Users who wish to make their own repairs can purchase the parts and guides they need through iFixit, Samsung 837, and Samsung retail and service locations for what Samsung promises are the same prices that are offered to its affiliated repair providers.

The announcement of Samsung’s repair program was followed by a similar one from Google, both of which came after Apple and Microsoft announced self repair services in the past several months. Samsung, Google, and Microsoft are all working with iFixit, while Apple is managing its repair service independently. That program launched in April and after seeing how it works, some experts allege it is designed to be unapproachable.

Cynics of these repair programs will say that changes to company policies are less about environmental sustainability or customer choice and more about getting ahead of possible new laws. Apple, Samsung, and Google showed no movement toward allowing customers to repair their own devices — even going so far as to make such repairs more difficult — until the Federal Trade Commission approved a landmark Right to Repair policy in July of last year.