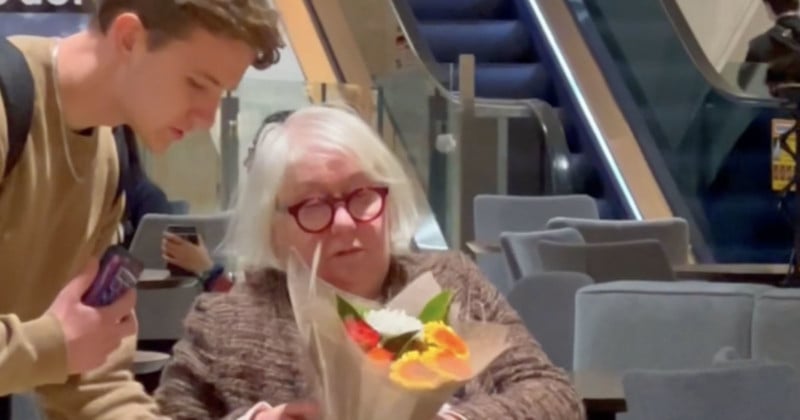 A woman who appears in a viral TikTok video that’s been watched over 60 million times, says she feels “dehumanized” by the experience.

The Australian woman, named Maree, says she’s been left feeling like “clickbait,” after the video, filmed without her consent, was shared on Harrison Pawluk’s TikTok page.

The post is a “random act of kindness” video that shows Maree receiving a bouquet of flowers from Pawluk with a caption that reads: “I hope this made her day better.”

Filmed in a shopping mall in Melbourne, Pawluk approaches Maree and says “excuse me, can you hold these?” And puts on his jacket as Maree politely holds the bouquet. Once his coat is fastened, he simply says “have a lovely day” and walks off.

TikTok users were quick to post comments such as: “when she started crying I couldn’t hold back,” and “my heart! That made her feel so good and it looks like she might have needed it.”

However, it’s now come to light that the woman is less than thrilled about her unexpected appearance on the internet after she spoke to Australian media.

“He interrupted my quiet time, filmed, and uploaded a video without my consent, turning it into something it wasn’t, and I feel like he is making quite a lot of money through it,” Maree tells ABC Radio.

“It’s the patronizing assumption that women, especially older women, will be thrilled by some random stranger giving them flowers.”

Maree says she didn’t bother to take the flowers home with her and later that evening discovered the video uploaded to TikTok.

“I thought, ‘oh well, who watches these things,'” she tells ABC. But the video has exploded in popularity garnering over 11 million likes.

In Australia, it’s legal to film someone in a public place, as it is in most countries, including the United States. But Maree wants to warn others about going viral.

Pawluk, who has 3.2 million followers, says a recent trip to Los Angeles had inspired him to “concentrate on random acts of kindness after witnessing the extent of the poverty and homelessness in a city where that shouldn’t be the case”.

“He offers flowers and pays for complete strangers’ groceries, and while cynics may claim it’s for views, Harrison simply has a personal commitment to helping people feel more connected and trusting,” the statement says.

“His videos are filmed in public places and so technically do not require consent.

“Having said that, while he has only so far encountered gratitude, if someone is upset, then they should feel free to personally email him.

“He would not want something designed to spread love and compassion to cause anyone concern.”