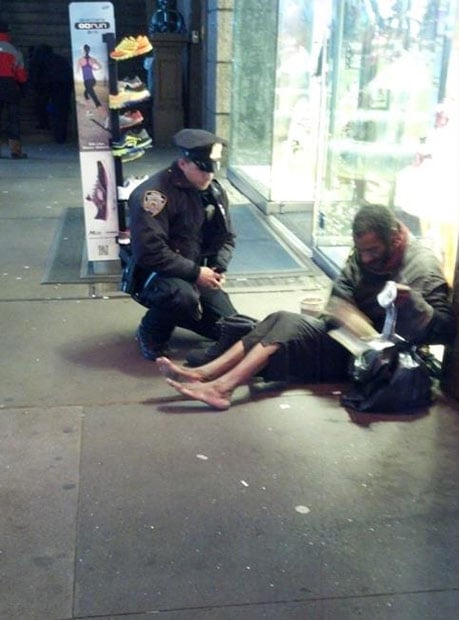 Candid snapshots that go viral online are often spread because they show people doing something embarrassing or stupid, so it’s refreshing to see a photo of a different sort taking the web by storm. The photo in question is of a police officer’s random act of kindness, snapped by an Arizona woman named Jennifer Foster when she was visting New York City back on November 14th.


Here’s Foster’s account of what she witnessed as she approached a shoeless homeless man:

Right when I was about to approach, one of [the NYPD’s] officers came up behind him. The officer said, ‘I have these size 12 boots for you, they are all-weather. Let’s put them on and take care of you.’ The officer squatted down on the ground and proceeded to put socks and the new boots on this man. The officer expected NOTHING in return and did not know I was watching. I have been in law enforcement for 17 years. I was never so impressed in my life. I did not get the officer’s name. It is important, I think, for all of us to remember the real reason we are in this line of work. The reminder this officer gave to our profession in his presentation of human kindness has not been lost on myself or any of the Arizona law enforcement officials with whom this story has been shared.

Foster sent the photo to the New York Police Department, which in turn cropped the image (for a closer view) and shared it on their Facebook page this past Tuesday along with Foster’s story. This is what resulted over the past two days:

The image has amassed nearly half a million likes so far in that short span. That’s not all though: media outlets across the country are now sharing the photo, including the New York Times.

Although the officer was not seeking attention through his actions, he is no longer anonymous. The man is 25-year-old Larry DePrimo, who is pictured here in this photo from 2011: 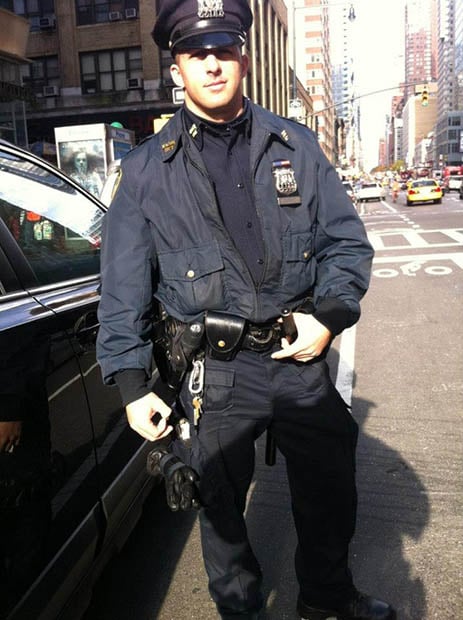 [DePrimo] readily recalled the encounter. “It was freezing out and you could see the blisters on the man’s feet […] I had two pairs of socks and I was still cold.” They started talking; he found out the man’s shoe size: 12. As the man walked slowly down Seventh Avenue on his heels, Officer DePrimo went into a Skechers shoe store at about 9:30 p.m. “We were just kind of shocked,” said [store manager] Jose Cano […] “Most of us are New Yorkers and we just kind of pass by that kind of thing. Especially in this neighborhood.”

Mr. Cano volunteered to give the officer his employee discount to bring down the regular $100 price of the all-weather boots to a little more than $75. The officer has kept the receipt in his vest since then, he said, “to remind me that sometimes people have it worse.”

This is a great example of photo sharing being used to inspire and touch lives.

(via NYPD via NYTimes via Laughing Squid)

Update: The story has gotten pretty big in the media… big enough that DePrimo was asked to give a press conference to tell his story: