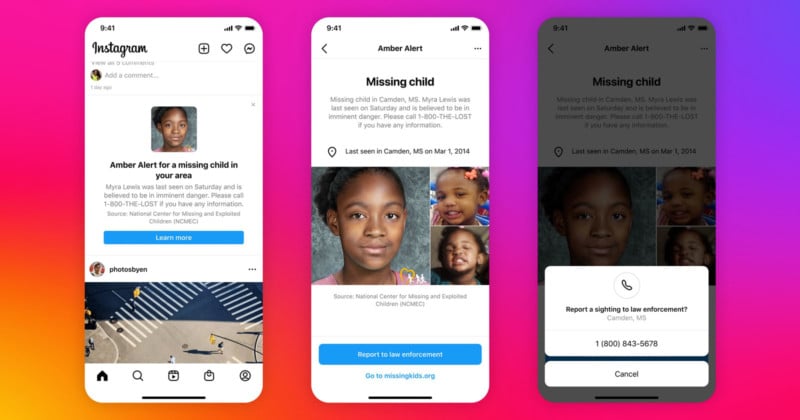 Instagram has announced that it will push AMBER alerts to users’ feeds to allow them to see and share notices of missing children in their area. The feature is rolling out today and will be available in 25 countries in the coming weeks.

The alert will include important details such as a photo of the missing child, a description, their last known location or the location of the suspected abduction site, and other pertinent information that can assist in helping find the child. The alert is pushed to feeds of people in a certain area and those people can share the alert with friends to help spread the word.

“We know that the chances of finding a missing child increase when more people are on the lookout, especially in the first few hours,” Emily Vacher, Director of Trust and Safety at Meta, says. “With this update, if an AMBER Alert is activated by law enforcement and you are in the designated search area, the alert will now appear in your Instagram feed.”

Instagram says that these AMBER alerts are rare and specific to a certain area. The company says if a user gets one, it means that they are within an area where there is an active search for a missing child.

“In order to know who to show these alerts to, we use a variety of signals, including the city you list on your profile, your IP address, and location services (if you have it turned on),” Vacher says.

The AMBER alert system will be available starting today and will fully roll out to Argentina, Australia, Belgium, Bulgaria, Canada, Ecuador, Greece, Guatemala, Ireland, Jamaica, Korea, Lithuania, Luxembourg, Malaysia, Malta, Mexico, the Netherlands, New Zealand, Romania, South Africa, Taiwan, Ukraine, the UK, the United Arab Emirates, and the United States over the next couple of weeks. Instagram says it is working to expand the program to more countries.

Instagram’s choice to add AMBER alerts follows Facebook’s decision to do so in 2015. The company says that since then, the alerts have assisted in hundreds of successful child endangerment cases in the United States and around the world. Meta specifically calls out one case in 2020 and another in 2016 where the children were recovered because they saw alerts on Facebook.