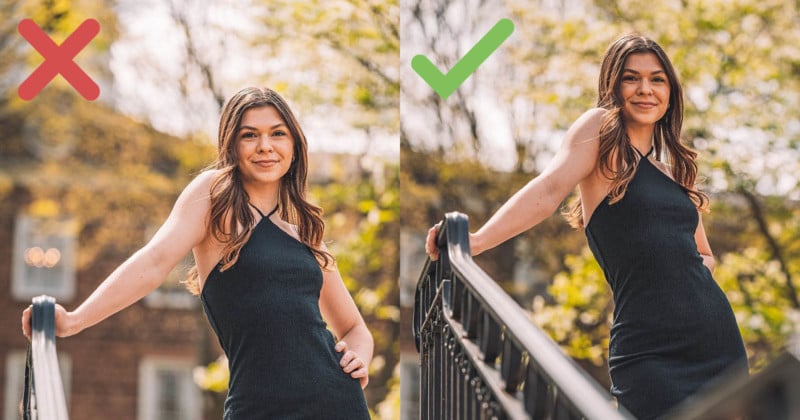 We’ve all heard of the classic rule of thirds, leading lines, and other composition techniques. But going with the most common rules can get a bit boring at times.


We don’t often talk about some rules, but every photographer has internalized them. In this article, we’ll discuss one of those rules so that you start taking great portrait images quickly and easily!

This is one of those difficult-to-talk-about topics that is best explained visually than with text alone. We usually never talk about this rule because we always assume that people know not to put lines through people’s heads without having a clear purpose for them–and usually, there is no purpose for them.

Avoiding lines through the head means that it’s best not to have background elements creating lines that originate from or run through the head. That could mean light poles or telephone wires or tree branches, and so on. We often don’t notice these things until it’s too late, and I’ll show some examples in just a moment.

It’s imperative to look at the framing from every aspect before clicking that shutter button. Once you leave the location, you might not get that opportunity again, and you’ll kick yourself because of it. Remember that what’s inside the frame is just as important as what’s outside it, so it’s essential to be conscious of your framing before clicking that shutter button! 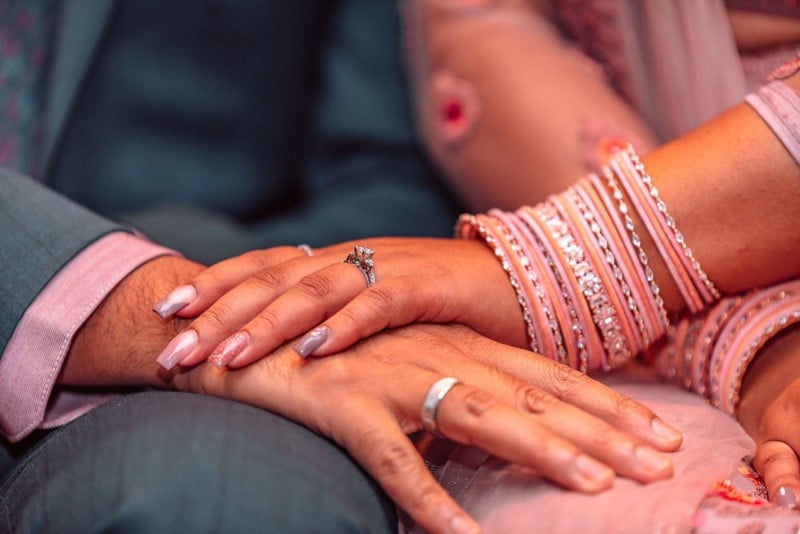 For this session, I’m working with my Nikon Z6 II and Tamron 70-200mm f/2.8 G2. This combination is perfect for portraits because the constant f/2.8 produces beautiful bokeh on the subjects, and the Z6 II’s Eye-AF is remarkable for people who aren’t moving super quickly.

Earlier last month, I photographed a university graduate named Hannah alongside her boyfriend, John (whom you’ll meet in a minute!). The environment posed some natural issues (pun intended) that we’ll have to navigate. 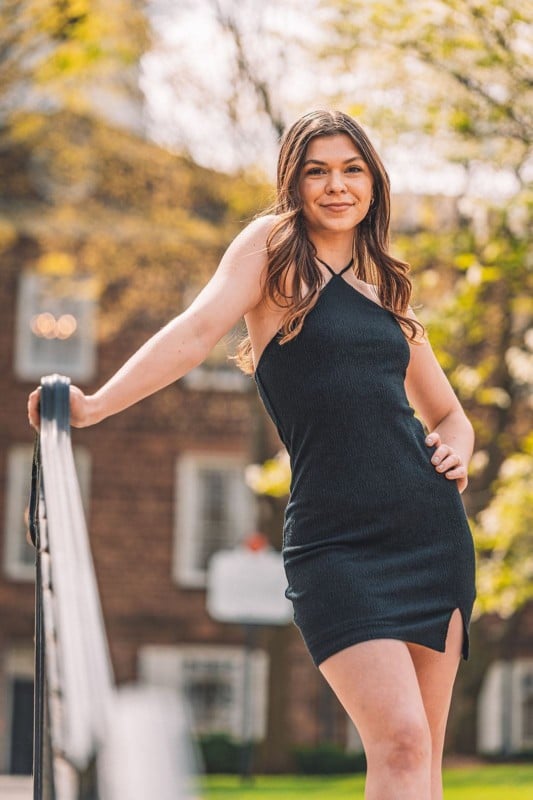 You’ll likely notice that the portrait is okay, except that one tree branch originates from her head, making her look like a puppet tied to a string. This effect is not what I was looking for, and I think we can make this look much better! I’ll move a bit towards the camera left and try to recompose the shot to remedy this. My goal is to ensure that the branch is not as distracting in the frame. 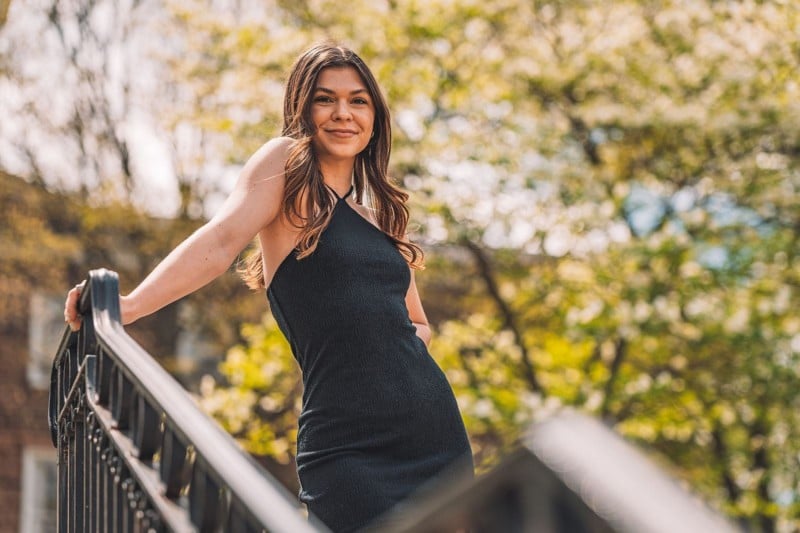 Ah, so much better! Now that branch and the railing act as leading lines towards her face. This photo could still use some tweaking, but it shows how much of a difference one slight movement can make.

Let’s look at another shot to see the same principle in action. Everyone, I’d like you to meet John. John is Hannah’s boyfriend. John, meet everyone. 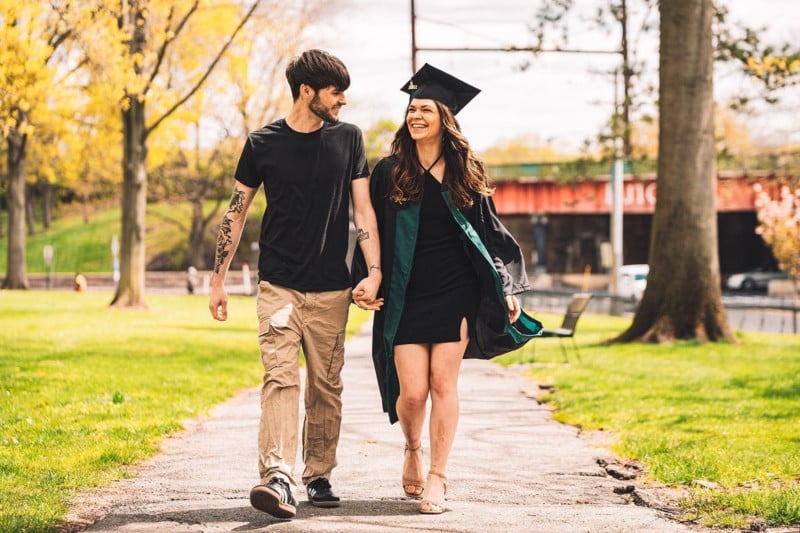 It might be much easier to see in this image than in the previous one: there’s a prominent line going through Hannah’s head, which doesn’t look too flattering. I bet that you noticed it but didn’t pay too much attention to it at first glance. Now that I’ve pointed it out, however, it must be bothering you big time. It certainly is bothering me!

There are all sorts of problems with the positioning here, but little fixes in split seconds can make all the difference when photographing on location. A super easy fix to this one is to move slightly to the side so that the line doesn’t protrude from her head. Instead, let’s try to make the line come in between them so it looks more natural–and using Photoshop, we can remove it later if we don’t want it there!

Examples like this are why I always tell my clients to do multiple takes of the same pose so that we have safety shots. In tricky situations like this one, I’d prefer to have more images to sort through than to reject them all because of an issue on my part when capturing their session.
Luckily I did just that! 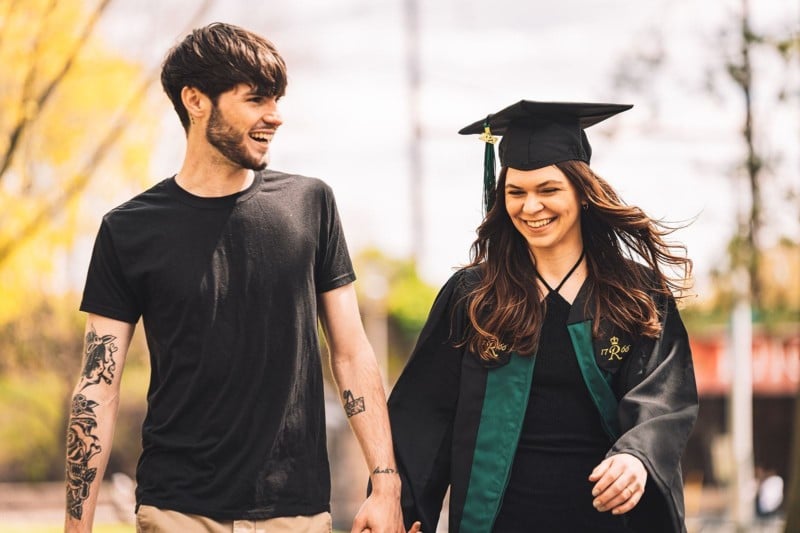 Wow! What an incredible difference! But now we have a line going through John’s head as well! Surely we can do better than that. Let’s try out a different angle from a little higher up and see what we can accomplish. If we shoot at eye level, we don’t make them look weaker. That’s a bit closer to what our eyes would see naturally. We also have to make sure that we don’t accidentally put another line through John’s head accidentally, so it’s important to be cognizant of the frame, as mentioned earlier.

So, what if we tried to get rid of the lines through the head by moving upward? In theory, this technique should push the head lower, thereby allowing that branch to frame the subject better than just a standard shot. This natural architecture could create a beautiful composition if we look at it in the right way. Let’s see how that looks! 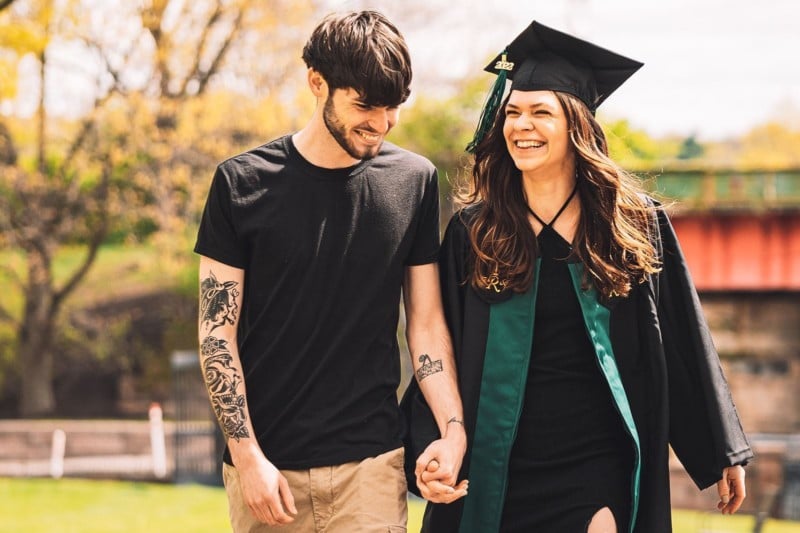 Oh, that worked perfectly! I moved two steps to the right to get rid of that pole in the background, and now we’ve gotten rid of the branch distraction.

This image is one of my favorites from the session. I love how we’ve caught their smiles and presence in the moment with one another. Alongside the emotions, we’ve kept away any lines that would intrude on their photograph negatively. The tree on the left side helps fill in what would have been otherwise negative space, making the frame feel more cohesive and intentional.

Remember: what’s inside the frame is just as important as what’s outside it. This simple rule has helped my composition greatly, and I highly recommend it to every photographer.

About the author: Zain Bhatti is a portrait and event photographer based in New Jersey, USA. He also owns ZN Media, a media company that produces photographic and cinematographic work for clients across New Jersey, Pennsylvania, and New York. You can find more of Zain’s work on his website and Instagram.