Photography is an inherently visual medium, but that does not mean those without perfect eyesight can’t enjoy it. Sony seems to have recognized this and added a screen reading feature to its Alpha 7 IV camera to help the vision-impaired.

As discovered by Sam from the YouTube Channel The Blind Life, Sony has implemented an accessibility option in its Alpha 7 IV that can help the visually impaired better use the full-frame camera.

“While not many people are talking about it, it has the capability to be a game-changer for an entire community of people,” Sam says.

According to the United States Centers for Disease Control and Prevention (CDC), approximately 12 million people over the age of 40 have vision impairment. Of those, eight million have a vision impairment that is uncorrected and 4.2 million of those have vision problems that cannot be repaired.

“Approximately 6.8% of children younger than 18 years in the United States have a diagnosed eye and vision condition. Nearly 3% of children younger than 18 years are blind or visually impaired, defined as having trouble seeing even when wearing glasses or contact lenses,” the CDC says. “The annual economic impact of major vision problems among the adult population 40 years and older is more than $145 billion.”

Photography is often described as an art form for everyone, but modern cameras have become so complicated that it can be difficult for people with perfect vision to navigate their many options.

Sam says that the Alpha 7 IV contains a lot of state-of-the-art features that make it one of the best options on the market, and many of those features aren’t found in any other camera. One such feature is the screen reading system, which PetaPixel confirmed is not available on any Nikon or Canon camera.

Sam says that screen reading technology is a must for many in the visually impaired community and is one of the only ways they are able to use devices like computers or smartphones.

“It’s literally how we interact with most digital text,” he says.

Screen readers are available across a variety of products. Sony, for example, already has one built-in to its televisions. However, there has not been a screen reader integrated into a digital camera prior to this point.

“I can’t tell you how difficult it is to read a tiny little menu on this tiny little LCD screen,” Sam continues. “In fact, many of us can’t.” 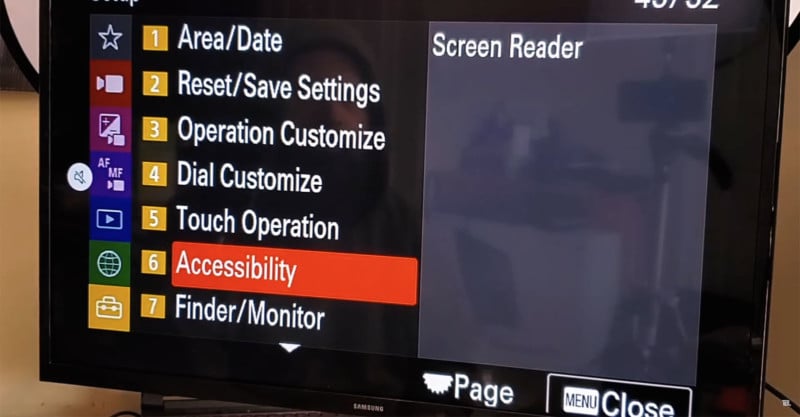 The screen reader system can be turned on from the Alpha 7 IV’s “Accessibility” subsection of the camera’s menu and once activated, the camera will read aloud some of the text that appears while using it.

There is still room for improvement, however. The camera won’t read everything and doesn’t seem to read menu items, which is unfortunate since that is one of the areas that the visually impaired need screen readers the most.

“Out of this menu system that has 30 or so options, it only reads about two or three,” Sam says.

It also doesn’t read the Quick Menu or standby screen. Still, the fact that it is offered at all, even in this incomplete form, is hugely helpful to those in the visually impaired community. Sam hopes that a future update or next-generation device will expand on the feature.

PetaPixel reached out to Sony to confirm that the Alpha 7 IV is the only camera in its lineup to offer this feature and asked if it planned to expand the feature or add it to future cameras, but a representative could not be reached for comment.