Photographer Gordon Laing from Camera Labs and Dino Bytes has released a special episode dedicated to one of the strangest digital cameras released in the 90s – The Nintendo Game Boy Camera.


Launched in Japan back in early 1998, Nintendo entered the digital photography space with its Game Boy Camera, a just about 0.014-megapixel resolution 2-bit camera system capable of capturing up to 4 shades of “grey” at about an equivalent of a 50mm perspective field of view.

When the system was initially launched, the price was about $50, allowing consumers to enter into the digital photography space at a massive discount when compared to the Nikon Coolpix 900 or Canon PowerShot Pro70 which each cost around $1,000 for a 1 megapixel(ish) digital file. The Game Boy Camera was built into the cartridge for the system and saved the images captured (up to 30) directly on the cartridge. 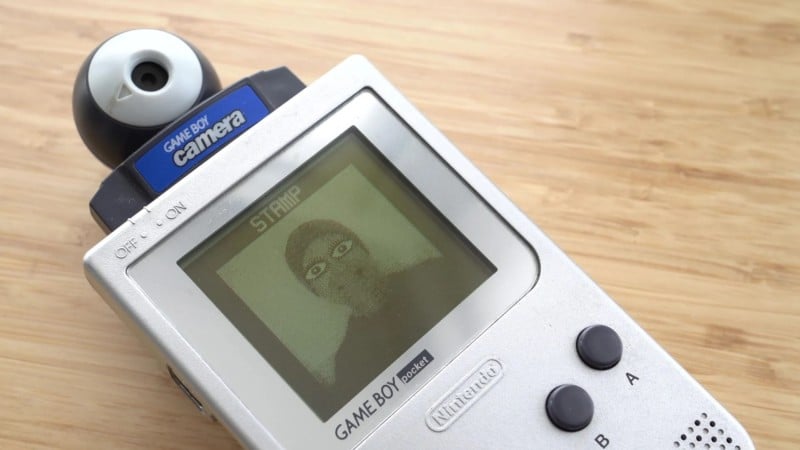 While these 128 x 128-pixel monochrome images are arguably terrible and the craze didn’t last that long, the $50 cost made digital photography accessible to anyone with a Game Boy system, gaining access to a massive audience and making the process actually kind of fun. The irony is that now, more than 20 years later, vintage image enthusiasts have found a new love for photography by resurrecting these Game Boy Systems and merging them with DIY 3D built accessories and custom software to do more than Nintendo had ever dreamed possible.

The Game Boy Camera itself was designed to accommodate the capability of the portable consoles’ screen allowing for a maximum resolution of 128×128 pixels with the images cropped a little vertically (down to 112 pixels) to allow for the Nintendo Game Boy header and footers to be placed on every image making the final shot size a whopping 160×144 pixels.

What made this particular camera all the more interesting is it wasn’t simply a plugin and shoot type system, but it came loaded with little games and apps to help distract from the incredibly low-quality images it could take, as Laing says, effectively “provided a distraction from the hardware limitations but an experience that’s still unique 24 years later.”

One of the frustrating designs of the old Game Boy Camera systems is there was no way to simply get the images off of the cartridge to store and display them on a normal computer (at the time at least). The only option was to use an additional accessory to print the images in postage-stamp-sized thermal paper, where the image quality was often even lower than the 2-bit images on the screen.

For people who wanted to hold on to images greater than the 30 image capacity, they had only one real option, and that was to buy more Game Boy Cameras. These old cartridges were effectively digital rolls of film. The good news is now users can leverage any number of methods to get their images from the Game Boy Camera, gaining access to the full pixelated abstract art images in all their glory.

Modern technology has given new life to the old digital photography entry point, allowing users to even share their images on social media and use 3D printed adapters to mount modern lenses to the cartridge. This includes new “analog” devices like the Analogue Pocket having better screens to work on allowing the retro-camera users to make composition and playback of the images a much more pleasant experience.

Laing says “With its basic imagery and cute game interface, it’s easy to dismiss the Game Boy camera as a mere toy, but it ticked several boxes lacking from every other digital camera at the time: it was small, indeed the World’s smallest digital camera for a while, genuinely cheap, appealed to a broad age group, and even had an affordable option to print.” This likely sparked a fire in many young creatives at the time, paving the way for them to get started in a photography career.

Be sure to watch the full 16-minute video to see all of the results from the testing Laing puts the system through and visit his YouTube channel Dino Bytes to see more great retro-reviews.