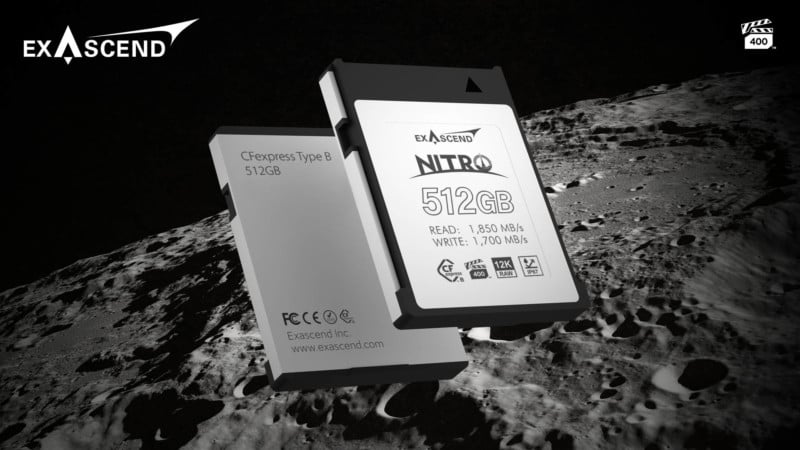 Exascend has announced the new 512GB Nitro CFexpress Type B card which is the first to be certified VPG400 by the CompactFlash Association (CFA), indicating a sustained read and write speed of at least 400 MB/s over the capacity of the card.

Exascend says that its cards are designed to support the most demanding cameras, and the Nitro series is its highest-end card. In addition to the promised 400 MB/s sustained read and write speeds, Exascend says the Nitro series can also peak at 1,850 MB/s read speeds and 1,700 MB/s write speeds. That performance is more than enough to work with the Canon EOS R3, EOS R5, EOS R5 C, Canon EOS-1D X Mark III, and Nikon Z9. The fastest burst photo speeds and up to 12K RAW are both supported.

Inside the Exascend Nitro’s CFexpress Type B casing, each side of the storage hardware is covered by a graphene heat spreader, allowing heat to quickly radiate away from critical components without affecting storage performance, the company says. This particular addition is unique to Exascend and is touted as a hardware innovation that the company says tackles real camera challenges with novel solutions. The card is also IP67 water and dust-resistant.

The CFA created the Video Performance Guarantee (VPG) back in 2011 with Profile 1, which guaranteed sustained capture of video at up to 20 MB/s without dropping any frames. As video quality has increased and the demands for cards have grown, the CFA has added additional profiles for VPG certification.

Exascend says that it is the first CFexpress Type B card to obtain the VPG Profile 4 certification, but not the first CFexpress card across all types. While the details of that certification require membership with the CFA, the main point is that the card is able to sustain a minimum of 400 MB/s over its entire capacity without dropping any frames. Many if not all CFexpress Type B memory cards show peak performance that is significantly higher than 400 MB/s, but sustained speeds are generally much lower than the promised peak speeds and aren’t advertised on the side of the card.

Very likely, this comparison is against the Sony CFexpress Type A cards since the company produces both a 160GB card and an 80GB card and both have VPG400 certification. The other specifications of the unnamed cards that Exascend notes match Sony’s cards as well. Regardless, comparing the performance of Type A to Type B isn’t particularly fair nor meaningful since the formats don’t currently overlap on available camera bodies — cameras currently have either Type A or Type B support.

Exascend’s VPG400-certified and IP67-rated Nitro CFexpress are launching at the end of April in one capacity: 512 GB. No pricing information was provided. The company says that additional capacities will be available “soon.”