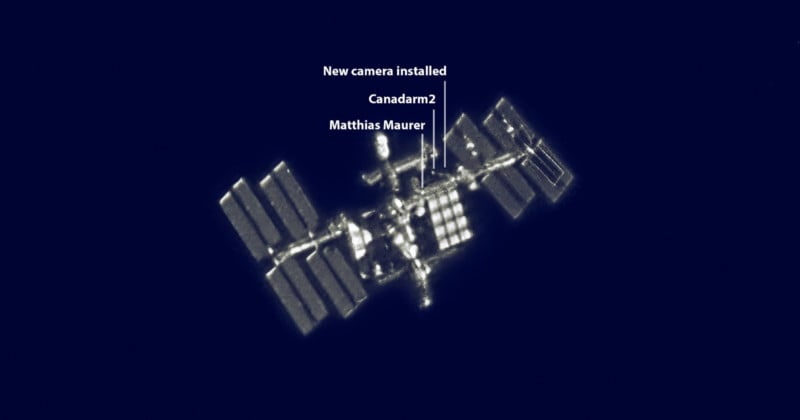 Last week, two astronauts spacewalked outside the International Space Station (ISS) to make repairs and perform maintenance on the structure. Astrophotographer Dr. Sebastian Voltmer managed to photograph the astronauts outside the space station from his backyard.

Seeing Astronauts Outside the ISS from Earth

Dr. Voltmer lives in Sankt Wendel, Germany which also happens to be where one of the two astronauts performing the spacewalk — Matthias Maurer — is from. Dr. Voltmer decided to capture the ESA astronaut’s first spacewalk as best he could not just from Earth, but from Maurer’s hometown. Thanks to a powerful telescope and a robotically controlled mount, he did.

“I used a C11 EdgeHD telescope on a 10micron GM 2000 HPS mount. One day before the ISS pass I updated my mount with the recent coordinates of the space station,” he tells PetaPixel. “With my servo motors I was able to track the really fast ISS.”

Dr. Voltmer demonstrates how he was able to track and photograph the ISS in a video he published a few days before the scheduled spacewalk.

“I was able to take these images of the International Space Station (ISS) under the best viewing conditions captured from the hometown of the ESA astronaut Dr. Matthias Maurer,” he says. “The resolution of the images shows details around 20 cm. The docked SpaceX Dragon capsule, with which the current Crew-3 flew to the ISS, can be clearly seen.”

He tells PetaPixel that he took his successful strategy from that early-morning shoot and implemented it when Maurer was scheduled to be on the exterior of the space station by updating his mount with the most recent coordinates of the ISS ahead of its appearance in the sky on March 23.

He shot the incredible moment shortly after sunset which shows enough detail to make out Maurer, a robotic arm, and the new external camera placed on the station’s truss.

“During the spacewalk of the two astronauts Raja Chari and Matthias Maurer the International Space Station appeared shortly after sunset in the bright evening sky over Germany. This image of the ISS pass was taken on March 23, 2022 under good seeing conditions through my C11 EdgeHD telescope from the hometown of ESA astronaut Dr. Matthias Maurer,” Dr. Voltmer writes on Space Weather.

“The docked SpaceX Dragon capsule, with which the astronauts of Crew-3 flew to the ISS, is clearly visible. Three years ago I got to know Matthias Maurer at our SpaceStudio (Weltraum-Atelier) in Nohfelden, Germany which is located near to Matthias’s hometown,” he continues.

“I first published an initial photo highlighting where Matthias Maurer appeared on the ISS. Due to my time constraints, I released this version right away on the internet, which then went viral, while I continued to work on the final image version with both highlighted astronauts.”

The photo below was created by Philip Smith, another ISS photographer, who noticed that Dr. Voltmer’s picture shows both Chari and the robot arm “Canadarm2” in addition to Mauer. 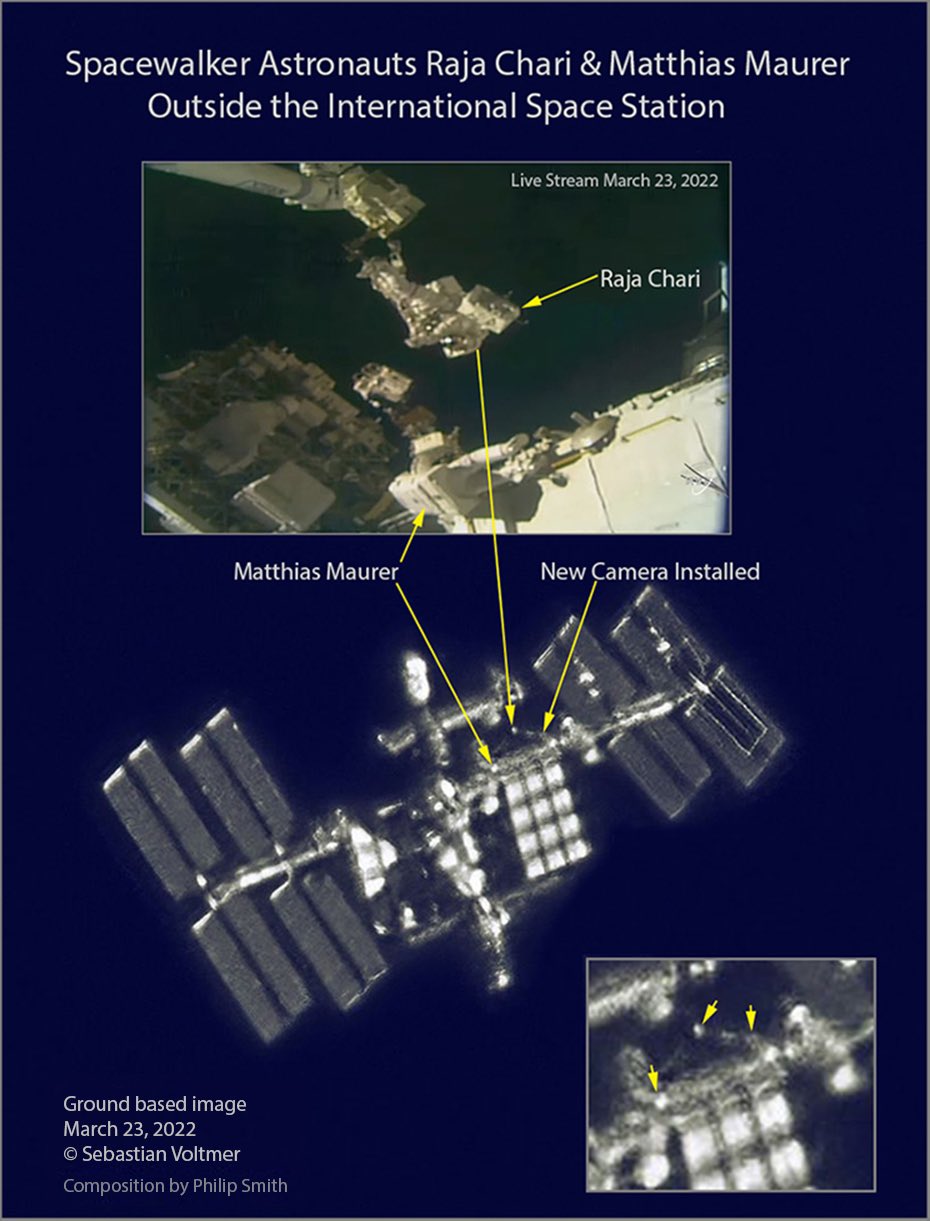 Dr. Voltmer is understandably excited about the successful capture.

“I feel like I just made a once-in-a-lifetime image,” he says. “It’s probably the first ground-based picture showing two spacewalkers on the ISS at the same time.”

According to NASA, Expedition 66 Flight Engineers Raja Chari of NASA and Matthias Maurer of ESA (European Space Agency) began a spacewalk to install hoses on a Raditor Beam Valve Module to support the temperature regulation on the ISS on the morning of March 23, 2022. The duo’s primary task was to install the thermal system and electronics components on the outside of the space station.

Maurer and Chari concluded their spacewalk six hours and 54 minutes later, concluding the 248th spacewalk in support of the space station assembly. It was Chari’s second career spacewalk, and Maurer’s first.

In addition to their primary tasks, the two also installed a power and data cable on the Columbus module’s Bartolomeo science platform, replaced an external camera on the station’s truss, and conducted other upgrades to station hardware. The pair deferred a few secondary tasks, such as torque resets and cable routing, to a future spacewalk.