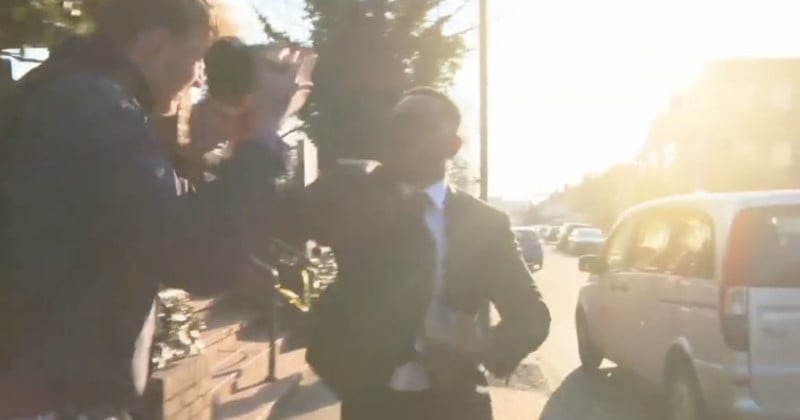 After emerging from a courtroom where he was found guilty of assault, United Kingdom rapper Dizzee Rascal was captured on video knocking a photographer’s camera out of their hands, picking it up, and hurling it across the street.

In a video captured by ITV News cameras, Rascall, real name Dylan Mills, can be seen knocking a Canon DSLR out of a PA Media photographer’s hands, picking it up off the ground, and throwing it with considerable force over passing cars and across the street.

In photos shared with Daily Mail, the camera can be seen with a shattered rear display and the lens is in multiple pieces.

Mills had just emerged from Wimbledon Magistrates’ Court where he was found guilty for assaulting his ex-fiancee Cassanda Jones, a charge he denies. Jones had alleged Mills had thrown her to the floor and pressed his head against hers during an argument in June of last year. The two had gotten into the argument when Mills dropped off their daughter at Jones’ property. The two had been together for nine years prior to their split.

While being arrested, Mills told police that it was Jones who assaulted him and pointed out a scratch she had left on his arm. With his guilty verdict determined, Mills will face sentencing in April.

Mills released a string hit of songs in the early 2000s and is reportedly worth around $3.3 million.

Photographers and Cameras are a Common Target

While this might be the first filmed encounter where a celebrity can be seen throwing a media person’s camera, it’s not the first time a rapper has had a disagreement with a photographer. In 2019, a rapper attacked a photographer and stole a camera at gunpoint during a photoshoot after he was reportedly unhappy with the results.

Outside of celebrities, attacks on photographers and their equipment are more common. In May of 2020, a news photographer in Illinois was met by an angry man who smashed his camera to pieces in a parking lot. In 2014, a woman violently attacked a photographer for using a drone, and in 2016 a man was attacked in San Francisco for photographing an accident.