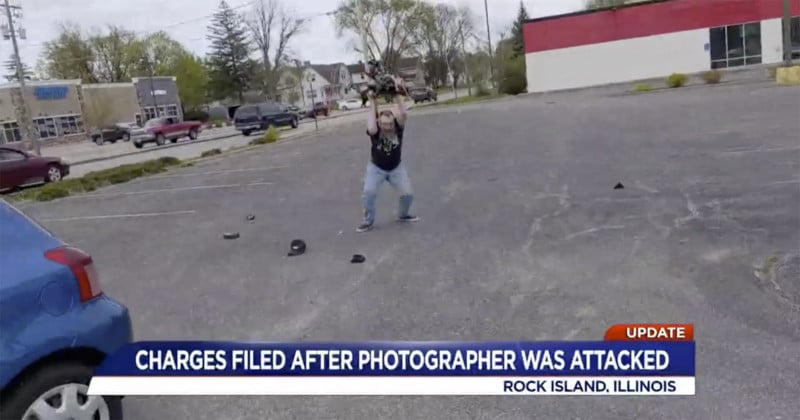 A news photographer in Illinois recently had a terrifying encounter with an angry man in a deserted parking lot. While capturing footage of empty stores for the local news, the photographer was attacked and had his camera smashed to bits on the concrete.

According to News 8, The incident took place on Friday, May 1st around 5pm, when one of the station’s photographers was approached by a bearded man who was angry that he might have been inadvertently filmed while driving by the photographer, who was shooting footage of local businesses from the sidewalk.

The man, later identified as 45-year-old Rock Island resident Brett R. Laermans, assaulted the photographer, first taking his hat and then his broadcast camera, which he smashed to the ground. Fortunately, the whole incident was captured on video, allowing the police to identify Laermans after a report was filed:

Thankfully, the photographer was not injured, and the footage allowed local police to identify Laermans, who has been arrested and is being charged with battery and criminal damage to property.

In our research, we found that Battery is a Class A Misdemeanor in Illinois, which carries a maximum sentence of 1 year in country jail and/or a fine of up to $2,500; Criminal Damage to Property of over $10,000—which the broadcast camera almost certainly was—is a Class 3 Felony, which can carry a prison term of 2 to 5 years and fines of up to $25,000.

This Photographer Made Sigma Outfits You Can Wear in Animal Crossing