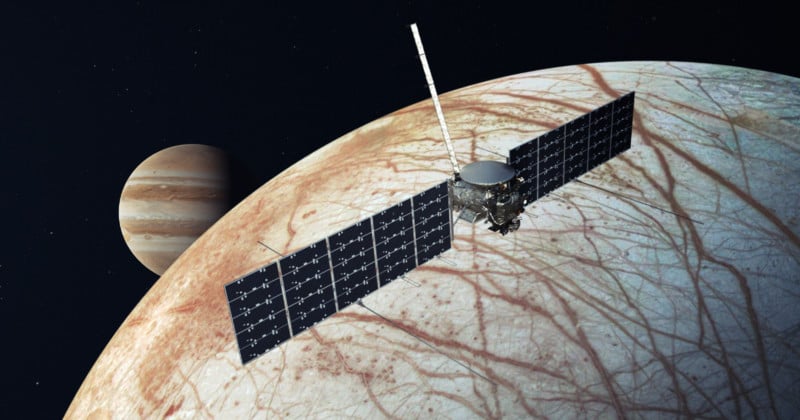 NASA has announced that it has begun to assemble the Europa Clipper, an SUV-sized spacecraft that will sport solar arrays large enough to span a basketball court. It is scheduled to be sent off on its task to image Jupiter’s icy moon in 2024.

Scientists are confident that Europa harbors an internal ocean that has twice the water found on Earth’s oceans combined and may have the conditions suitable for supporting life right now. The Europa Clipper will orbit Jupiter and conduct multiple close flybys of Europa to gather data on the moon, including atmosphere, surface, and interior information. The nominal mission would perform at least 45 flybys of Europa at altitudes varying from 1,700 miles to 16 miles (2,700 kilometers to 25 kilometers) above the surface.

“Its sophisticated payload will investigate everything from the depth and salinity of the ocean to the thickness of the ice crust to the characteristics of potential plumes that may be venting subsurface water into space,” NASA explains.

The engineering components and science instruments have begun to arrive in NASA’s Jet Propulsion Laboratory in Southern California and the space agency says that it expects most of the flight hardware and all nine of its science instruments are expected to be fully assembled by the end of the year.

Almost every detail of the spacecraft will have to be handcrafted, integrated, and re-tested before the Europa Clipper can be confidently deployed on its mission. Engineers need to be sure the instruments can communicate with the flight computer, spacecraft software, and the power subsystem.

“We’re moving into the phase where we see the pieces all come together as a flight system,” Europa Clipper Project Manager Jan Chodas of JPL says. “It will be very exciting to see the hardware, the flight software, and the instruments get integrated and tested. To me, it’s the next level of discovery. We’ll learn how the system we designed will actually perform.”

The Europa-UVS unit is the next in line to be completed and was delivered to JPL last week. An ultraviolet spectrograph, this imaging unit will collect ultraviolet light and then separate the wavelengths to help determine the composition of Europa’s surface and the gases in its atmosphere. The photo below was taken on March 3, 2022, and shows the delivery of the Europa-UVS unit to JPL.

For photos in the visible spectrum, the Europa Clipper will rely on the EIS, which is equipped with a wide-angle camera (WAC) and a narrow-angle camera (NAC). Each camera has an eight-megapixel sensor sensitive to visible wavelengths of light and a small range of near-infrared and ultraviolet wavelengths. The NAC pivots 60 degrees on two axes. Both cameras will produce stereoscopic images and have filters to acquire color images.

“EIS will map about 90% of Europa at 330 feet (100 meters) per pixel,” The Europa Clipper team explains. “That’s six times more of Europa’s surface at five times better resolution than the finest images from the Galileo spacecraft. When the spacecraft is close to Europa during flybys, EIS will produce images with a resolution 100 times better.”

Image credits: Header image is an artist’s rendering of the NASA Europa Clipper spacecraft, via NASA/JPL-Caltech.