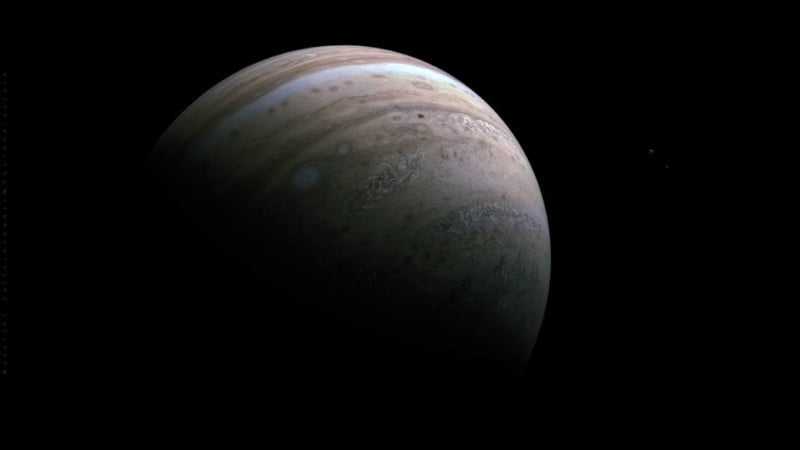 NASA has shared an absolutely breathtaking photograph of Jupiter and two of its moons Io and Europa, recently captured by the Juno Spacecraft. The image was taken during a January 12th flyby of the gas giant that luckily happened to capture the cosmic background actors in a single frame.

The photograph, captured by citizen scientist Andrea Luck and released by the Juno team this week, shows the southern hemisphere of Jupiter joined by the solar system’s most chaotic and volcanic astral body Io, with nearby Europa hiding a global ocean of liquid water beneath an icy surface.

Jupiter and Two of its Moons in One Shot

According to the Juno team at NASA, the probe will get an even more detailed visit of Europa in September when the spacecraft will make its closest flyby of the gas giant’s moon in several decades. The team also says that Io will get a much closer visit as well later in 2023 and early 2024, leaving the scientific (and astrophotography) crowds anxiously waiting for the resulting images.

According to NASA, at the time that this image was taken, the Juno Spacecraft was approximately 38,000 miles (61,000km) from Jupiter’s stormy cloud tops at a latitude of about 52 degrees south, so it’s understandable if the two interloping moons aren’t immediately visible. Since they only make up about two percent of the radius of Jupiter, it is easy to miss them unless viewers were keenly aware and looking for them. 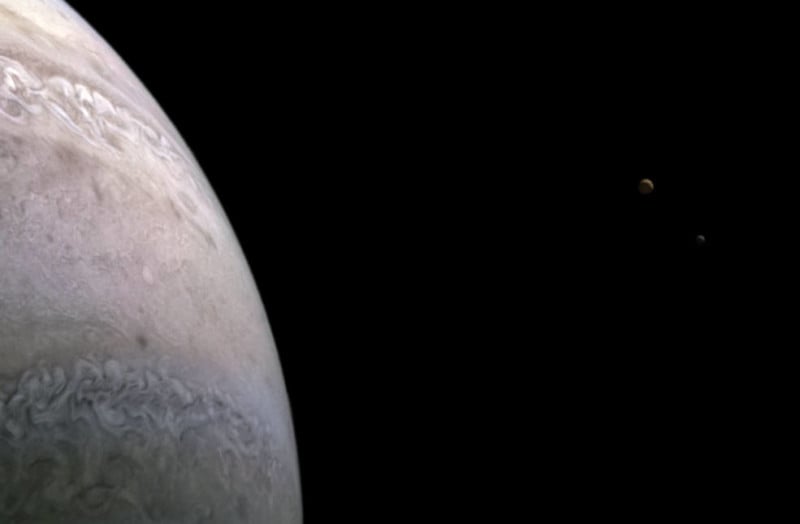 Even when zoomed in, the moons are still very faint and hard to see in the deep darkness of space, yet the two moons (about the size of our own moon) are wildly different and diverse in their natures.

Io and Europa are Very Different

According to NASA, Io, the innermost large moon of Jupiter, is stretched and squeezed by the gas giant’s intense gravity which results in an intense molten interior that throws sulfurous magma hundreds of miles into space.

Conversely, Europa has scientists the most excited, as it has the possibility to contain life. This moon is composed mostly of water beneath an ice shell and irradiated salts. According to NASA, the global ocean on Europa dwarfs all the water on earth and is the subject of an upcoming mission — the Europa Clipper — that plans on between 40 to 50 flybys to take high-resolution images of the moon’s icy crust surface while trying to determine what the body is made of and what is actually happening beneath it.

JunoCam’s raw images are available for the public to view and process here and more information about the Juno program can be found on the official Juno page at NASA and the Mission Juno site.