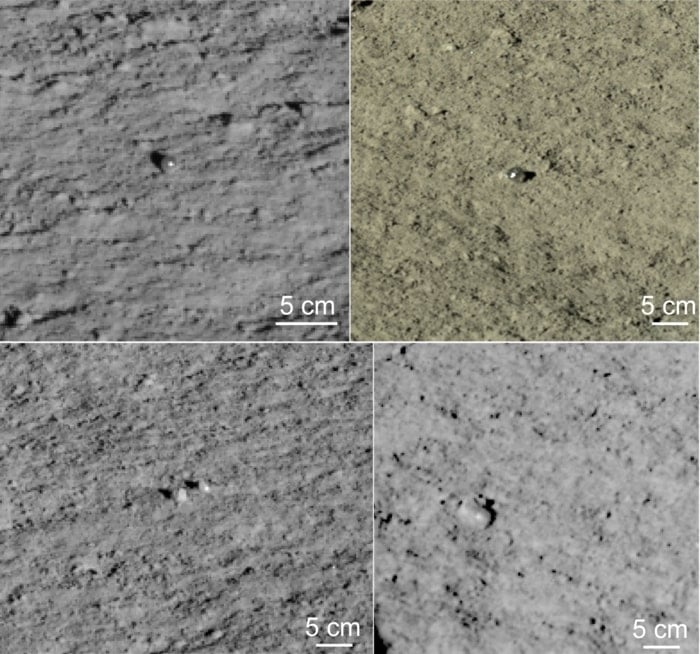 Scientists behind China’s Yutu-2 rover say they have discovered “translucent glass globules” on the far side of the surface of the moon. Roughly a centimeter in diameter, they were discovered by the panoramic camera on the rover.

Dr. Shiyong Xiao, the lead on the study that was published in a paper on the subject, says the team discovered several unique translucent spherical and dumbbell-shaped glassy globules on the far side of the moon.

The researchers say these glass globules are transparent to translucent and are light brown in color. They also say that their centimeter size makes them quite large and unlike any found on the moon in the past.

“The globules simply blow our mind, since they are so unique on the Moon,” Xiao says.

As Futurism points out, glass has been found on the moon before, but these are unusual in that they are bigger and colored differently than samples that have been seen in the past. It has been determined in the past that the glass was formed by meteorite impacts or via the moon’s past volcanic history. The glass that had been collected previously — specifically by the Apollo astronauts — was about a centimeter in size, but was mostly dark and opaque.

The researchers say that the largest holohyaline globules found on the Moon are less than one centimeter in size, such as a globule recently collected by the Chang E-5 mission, and they are also opaque. That makes this discovery special in that the balls are larger and also translucent.

“Their existence on the Moon indicates that impact events on the other planetary bodies could also form tektite-like impact glasses,” Xiao says. “Such glass globules should be commonly produced by ancient impact basins on the Moon, so their compositions and isotopic ages will be highly valuable to understand the early impact history.”

Xiao says that the discovery of these glass globules might indicate that more of them could be found on the far side of the moon and that they could serve as a way to produce glass for future lunar bases.

“The first discovery of macro-sized translucent glass globules on the Moon confirms that lunar anorthosites are excellent raw materials to manufacture glasses with good light-admitting quality. Also, at the dawn of constructing human bases to the Moon, lunar anorthosites are a promising and widespread resource to produce glasses in-situ,” Xiao speculates.

While the discovery is interesting, Yutu-2’s history should temper expectations. The “mysterious hut” that it photographed in early December of last year ended up being just a rock. Another supposed discovery of a “gel” turned out to also be just a rock.

While the study has been shared in a peer-reviewed publication, it’s worth waiting until more information comes in before getting too excited about Yutu-2’s latest discovery.