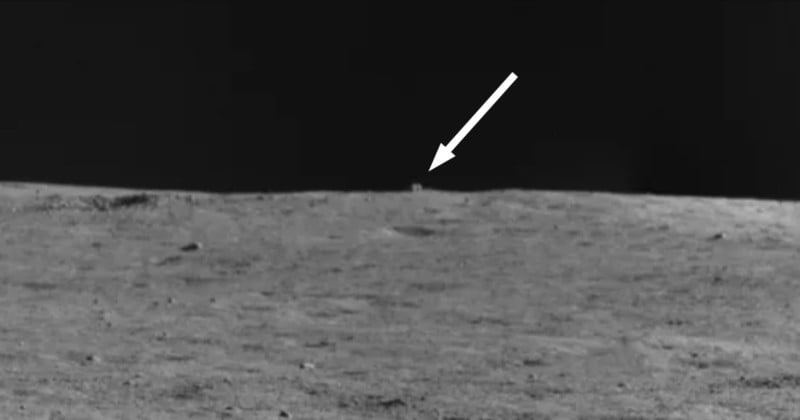 China’s Yutu 2 lunar rover has photographed what is being described as a “mystery hut” on the far side of the moon, and Chinese scientists are eager to have the robotic exploration vehicle investigate it further.

The finding was shared on Our Space, an online publication affiliated with the China National Space Administration (CNSA) that is documenting Yutu’s lunar mission.

Yutu 2 first landed on the moon on the Chang’e 4 Chinese spacecraft back on January 3rd, 2019, and it was the first space mission to successfully soft-land on the far side (or “dark side”) of the Moon. The “hut” was spotted by the rover on the mission’s 36th lunar day, each of which is about 29 Earth days.

“Suddenly, an obtrusive cube on the northern skyline attracted their attention,” Our Space writes (translated from Chinese to English). “This object pierced through the winding of the skyline, like a ‘mysterious hut’ that appeared out of thin air.

“There was a large ‘baby’ impact crater beside it. Was it a home built by aliens after the crash landing? Or is it the pioneer spacecraft of the predecessors to explore the moon?”

The photo shot by Yutu 2 shows that the cube-shaped object was about 80 meters (~260 feet) away on the horizon to the north in the 112-mile-wide (180km) Von Kármán impact crater.

Our Space referred to the object as “神秘小屋,” or “mystery house,” and says that the mission’s scientists were immediately curious about the object after hearing about it from the rover’s pilots.

“This thing is interesting!” they reportedly responded. “Let’s go check it out!”

Ah. We have an update from Yutu-2 on the lunar far side, including an image of a cubic shape on the northern horizon ~80m away from the rover in Von Kármán crater. Referred to as "神秘小屋" ("mystery house"), the next 2-3 lunar days will be spent getting closer to check it out. pic.twitter.com/LWPZoWN05I

It will take some time before the rover is able to get to the bottom of the mystery, though. Despite being only 260 feet away, it will take the rover about 2 to 3 lunar days, or two to three months of “trekking” before it will reach the object to get a better look at it.

Andrew Jones, a journalist tracking China’s space program, Tweets that a possible explanation for the “hut” is that it is a large boulder that was pulled out of the lunar surface by an impact event.

So yeah, it's not an obelisk or aliens, but certainly something to check out, and hard to discern much from the image. But large boulders (right) are sometimes excavated by impacts, as seen by the Chang'e-3 mission, which launched 8 years ago on Dec 1. [CNSA/CLEP] pic.twitter.com/ifOIFr4oQI