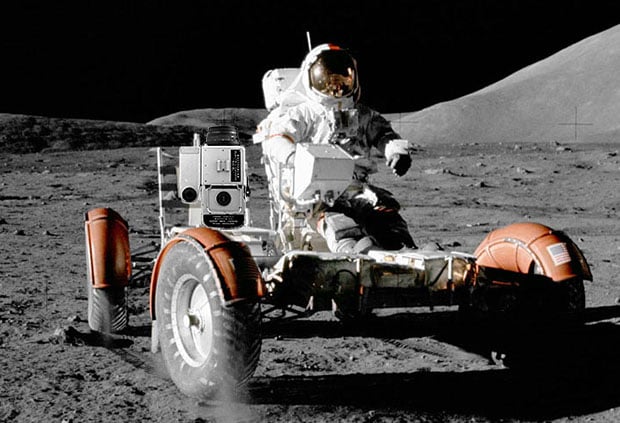 You may have heard that there are 12 Hasselblad film cameras sitting on the surface of the moon at this very moment, left there by astronauts who needed to lighten their vessel’s load as much as possible. However, did you know that at least one of those cameras was left there to test the durability of the gear?

That interesting fact was revealed earlier this week in a Bloomberg interview with astronaut Eugene Cernan, the Apollo 17 Commander who’s famous for being the last man to walk on the surface of the moon (the 11th person in history to do so). Cernan states,

I left my Hasselblad camera there with the lens pointing up at the zenith, the idea being someday someone would come back and find out how much deterioration solar cosmic radiation had on the glass.

So, going up the ladder, I never took a photo of my last footstep. How dumb! Wouldn’t it have been better to take the camera with me, get the shot, take the film pack off and then (for weight restrictions) throw the camera away?

I did capture in my mind what that last footprint looked like, though. It’s still very vivid […]

NASA’s published transcripts of that day on the moon show that the plan was to leave the camera pointed vertically on the seat of the lunar rover.

There are a number of national space agencies planning to send astronauts to the moon over the next couple of decades. If the camera and the rover are still intact, it will certainly be interesting to learn the results of this most extraordinary camera durability experiment…