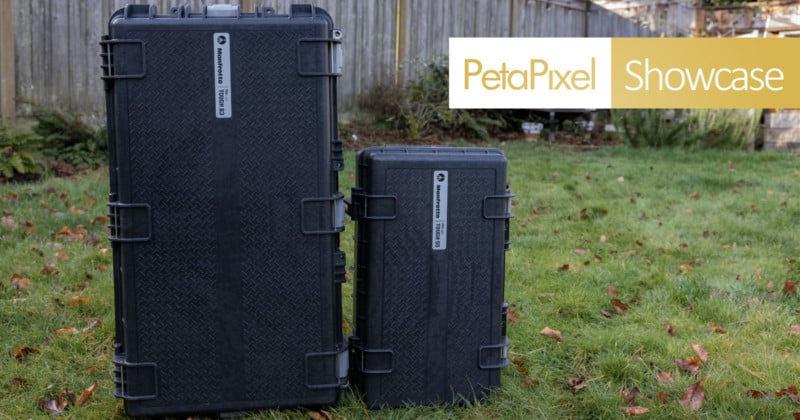 Manfrotto recently expanded its PRO Light Tough cases and while at their core these hard cases are pretty similar to other offerings, Manfrotto does offer some modular accessories that make them stand apart.

Manfrotto sponsored this Product Showcase so we could take a look at its two new hard cases that, on their own, at first look like any other hard case out there. The difference here is that they add to the expectation of what a hard case can or should do in the form of modular accessories that make them more than just big, protective, hard boxes.

When I ran my production company, I was a big fan of hard cases. I had different options from a few brands but always picked them for my heavy equipment due to the protection they afforded my gear and the fact I wasn’t afraid to put them through luggage check when I had to fly to get to a job. Typical camera bags are nice, but there is something to be said about the peace of mind a hard case brings, and I had no problem stacking cases on top of each other or just tossing them in the back of my truck en-route to a job, rain or shine. 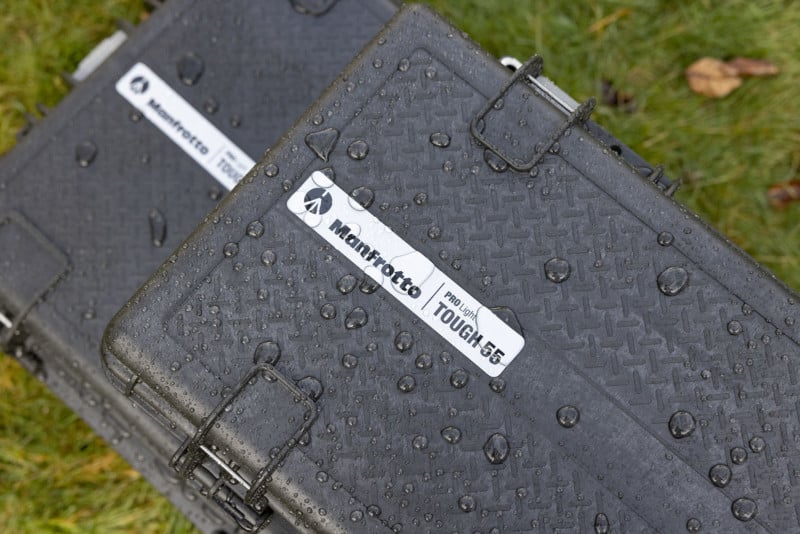 The Manfrotto PRO Light cases live up to that expectation. The company has launched two new iterations of the cases: a pre-cubed foam TH55 Reloader case and a new empty TH83 case. The large, TH83 case would be my recommendation for anything from short light stands to other gear that either has its own case or isn’t particularly fragile. Since it has no padding or interior, you would have to pick up your own foam insert or set of camera cubes in order to pad gear like lights or cameras.

It and the smaller TH55 are water and dust-proof (IP67 rated) which I tested with a garden hose blasting max power in my backyard. Even after a few minutes of continuous spray from all angles, the interior of the cases remained perfectly dry. 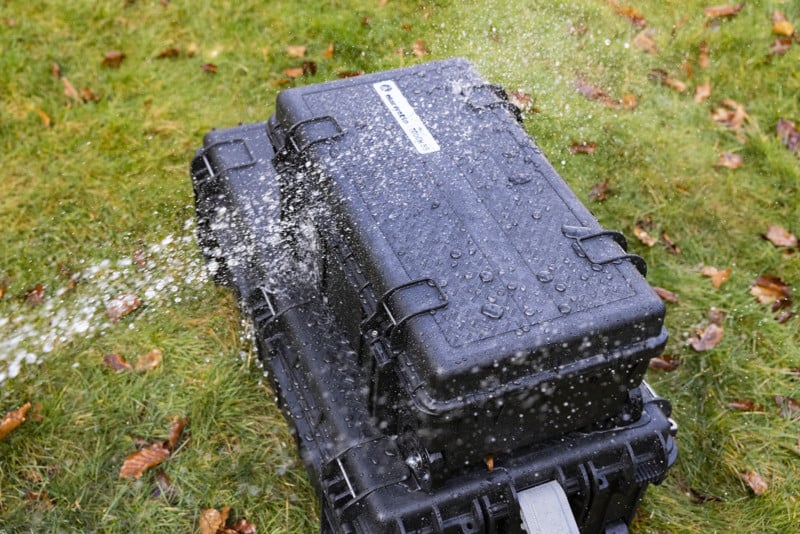 Of the two Manfrotto sent for us to check out, I really gravitated to the TH55. This one, which features the pre-cubed foam that lets you custom build your own padding for whatever you want to put into it, is compatible with a set of exterior modular accessories that turn it from a typical hard case into something that is far more versatile.

If I had one complaint about hard cases, in general, it’s that they are not “fun” to travel with. If I use one as a carry-on, for example, I absolutely have to have another piece of luggage with me (usually a backpack) so I have easy access to my computer, headphones, and other things that make flying tolerable. A hard case alone is a pain in the butt to get into in an airport and pretty much impossible once you’re in the air. 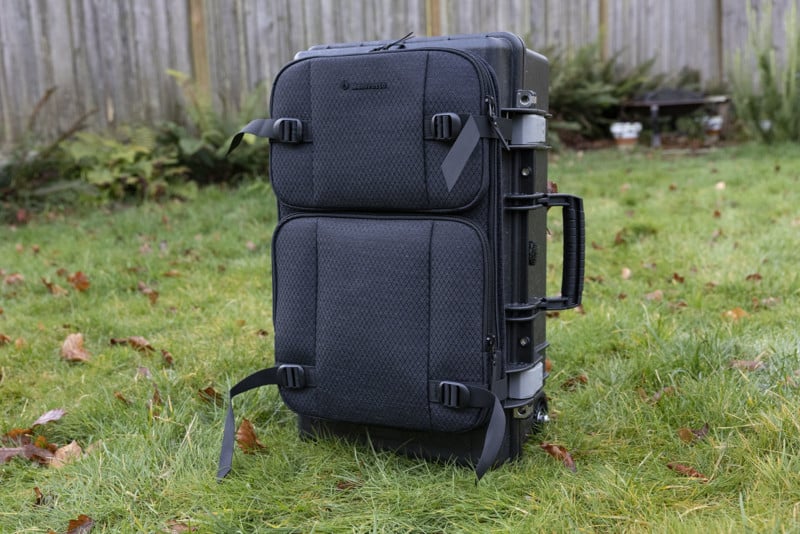 Manfrotto seems to have thought of that. One of the several modular accessories the company offers converts the hard case into something more akin to a rolling case. After strapping to the front of the TH55, which only takes about a minute, the laptop sleeve accessory adds multiple pockets to hold all those things I mentioned usually have to go in a dedicated backpack. 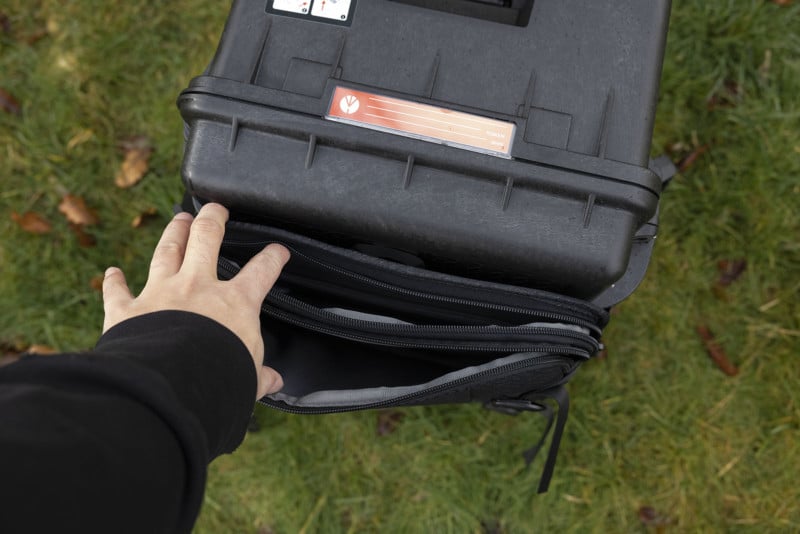 The modular sleeve can come off and operate as a sling bag as well, but I found it to be best suited strapped to the case itself. 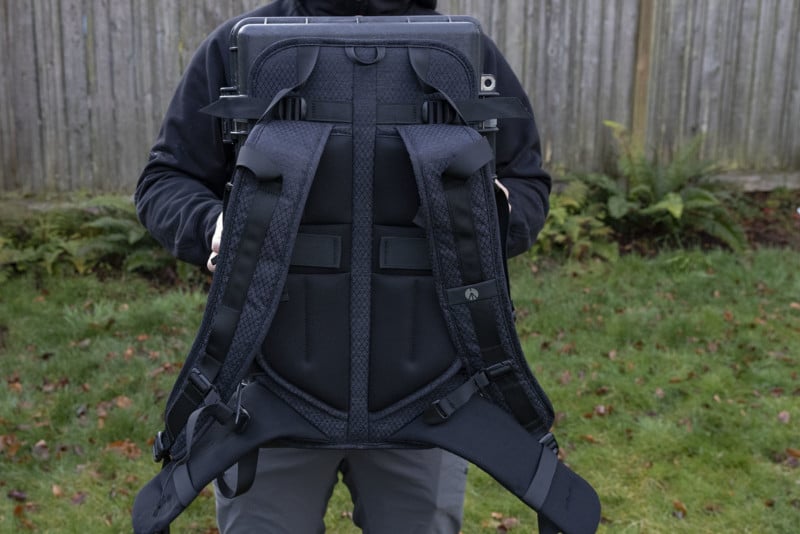 Manfrotto also seems to have realized that not all shooting circumstances take place in environments that can be rolled into. Another modular accessory called the harness system straps on in the same manner as the laptop sleeve turns the TH55 into a backpack that is, surprisingly, comfortable. 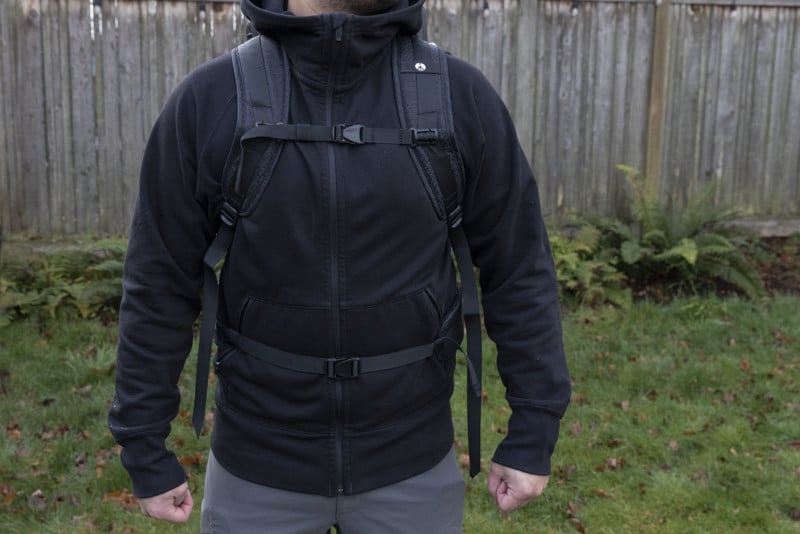 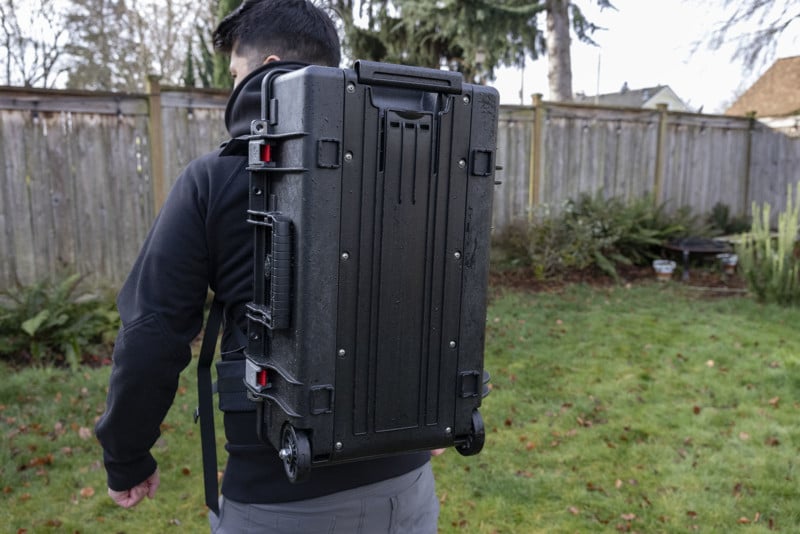 Now, I don’t recommend taking this thing on a hike, but the padding and weight distribution is sufficient to make carrying it up a few flights of stairs a lot easier than holding the case at waist level. Additionally, now that it can be carried on your back, that frees up your hands for two other cases, which reduces the number of trips you have to take to get all your equipment up a hill or a building without an elevator.

Manfrotto also has an attachment that will hold a video tripod, which is of course super useful as well, for obvious reasons.

All these modular attachments strap to the case using the same kind of system you would find on any bag or strap that adjusts its tightness or length. As a result, none of them are particularly fast to put on or take off, and I wish there was some kind of clip system in place here instead to make the process more seamless. Also, the straps don’t neatly stay flat against the bag, so you’ll see them flapping around which doesn’t do any harm, but it isn’t particularly attractive. These are two minor complaints on what is overall a really nice way to make a hard case operate beyond its normal parameters.

More Than Just a Hard Case

At their core, the Manfrotto PRO Light Tough cases are hard cases, but they differentiate from competitors thanks to the nifty integration of accessories. They work well and there are a few different options, which means these totally optional add-ons are there for anyone who wants them. While not every photographer is going to need these modular accessories, they’re at least an option, and a pretty solid one at that.

Thanks to Manfrotto for sponsoring this Showcase. PetaPixel Showcase is a format where our staff gives you a hands-on with unique and interesting products from across the photography landscape. The Showcase format affords manufacturers the opportunity to sponsor hands-on time with their products and our staff, and it lets them highlight what features they think are worth noting, but the opinions expressed from PetaPixel staff are genuine. Showcases should not be considered an endorsement by PetaPixel.