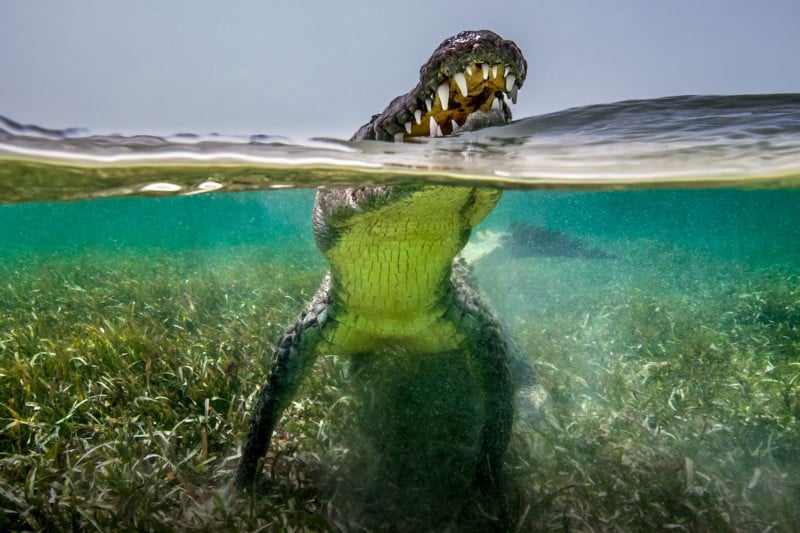 When the first pandemic hit in 2020, photographer Art Wolfe was working on a big wildlife book coming out in Fall 2023. He had already rescheduled a few trips but decided to take one with a friend to the state of Yucatán in southern Mexico to photograph American crocodiles.


Wolfe is a celebrated American photographer and conservationist who has been photographing the beauty of the earth’s stunning landscapes, wildlife, and native cultures right out of college for over forty years.

“While this species can get up to about 20 feet, these crocs were probably in the nine-foot range,” Wolfe tells PetaPixel. “We snorkeled off a boat while biologists with poles watched out for our safety. They have studied these particular individuals for years and know their habits and territories very well.”

Feeling Safe in the Water with Nine Foot Crocs

“I felt pretty at ease,” says Wolfe, “and occasionally the guys with the poles would reach under their snouts with the poles and scratch their chins. All that said, if you’re not feeling apprehensive when you are in the water with crocodiles, you are not paying attention!

“We were in no more than three or four feet of water, so we could anchor ourselves somewhat against the current. The crocodiles would stir up the sand in the seagrass, but the current would clear it out pretty quickly.”

The photographer’s Canon full-frame DSLR was placed in a Nauticam underwater housing and was only a couple of feet away from the prehistoric-looking predators and Wolfe was “making [himself] very small behind it!”

The crocodiles are at the top of the food chain and therefore did not need to run or swim away from the photographer. In fact, they would “bounce their toothsome snouts” off the dome of the underwater camera housing as they were being photographed in the Banco Chinchorro Biosphere Reserve in Mexico.

Photographing Half Underwater and Half Above

The beauty of this image is that the reptile’s body is below the surface as it walks underwater, but the snout is above the waterline of the Gulf of Mexico showing a menacing set of about 80 glistening teeth. The lens is also half-submerged as Wolfe tries to steady it from getting bobbed around in the waves.

The crystal-clear water reflecting the green hue of the vegetation made for a a perfect foil to the blue sky above, separated at the one-third line by the water level.

The Seattle-based photographer says he is “out of his element” photographing underwater, but he does his research and does his best to nail the perfect shot even when working in unfamiliar environments.

To photograph the crocodiles, Wolfe’s team had to head thirty miles offshore to a shallow region where the crocodiles hang out, which was the hardest part of the trip. Sand from the Sahara Desert was flying in on a storm coming from the Atlantic Ocean on the East. This made the sky go overcast, but it also created the perfect lighting condition with very even, diffused light that filtered into the shallow sea. The surface of the water acts as a natural reflector to illuminate the inside of the croc’s mouth.

“It was good to know that the crocodiles dine rarely, but their prey is mostly seabirds, as well as the by-catch of local lobster fishermen,” says the wildlife photographer. “When they hear the outboard motors coming, it’s like ringing the dinner bell. For better and mostly worse, we humans are changing the dynamics of wildlife everywhere.”

Wolfe (born in 1951) emphasizes that wildlife photography is conservation photography — it’s about building awareness of the natural world and it’s about advocacy for the planet to preserve unspoiled lands and endangered species, near and far.

About the photographer: Art Wolfe has covered all the continents to capture the glory of our planet for over forty years. In the last 30 years, he has published over 60 books which is some sort of record at two books per year. Within four years of earning his BFA from the Univ. of Washington, he completed an assignment for National Geographic and made a book documenting Indian Baskets of the Pacific Northwest and Alaska (first pub. 1978). The U.S. Postal Service has used Wolfe’s photographs on two stamps.