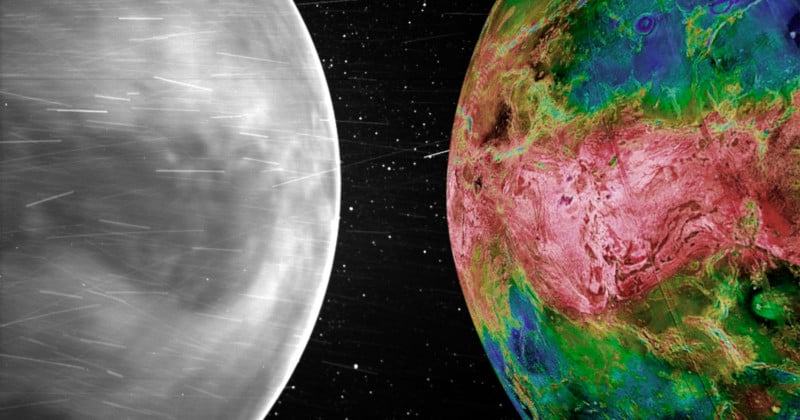 NASA’s Parker Solar Probe has captured its first visible light images of the surface of Venus from space, piercing the thick clouds that obscure the planet.

NASA reports that in two recent flybys by the Parker Solar Probe, it was able to use its Wide-Field Imager, otherwise known as WISPR, to photograph the entire night side of Venus in wavelengths ranging from the visible spectrum through infrared. The photos and videos reveal what NASA describes as a “faint glow” from the surface and also shows distinctive features like continental regions, plains, and plateaus on the surface.

“Venus is the third brightest thing in the sky, but until recently we have not had much information on what the surface looked like because our view of it is blocked by a thick atmosphere,” Brian Wood, lead author on the new study and physicist at the Naval Research Laboratory in Washington, DC., says “Now, we finally are seeing the surface in visible wavelengths for the first time from space.”

The Parker Solar Probe flies by Venus as a way to bend its orbit closer to the sun. NASA explains that WISPR is designed to see faint features in the solar atmosphere and wind, but some scientists thought the imaging technology would also be able to see cloud tops that obscure Venus as it flew by on its primary mission.

But WISPR did much more than that. Instead of just seeing clouds, it was able to see down through them and onto the surface of the planet. The first photos of Venus were captured on the third flyby of the planet in July of 2020 and were so impressive to scientists that they turned those cameras on again as the Parker Solar Probe flew by for the fourth time in February of 2022.

NASA explains that the visible light going from Venus’ surface is only the very longest visible wavelengths, which border on infrared. This light is lost on the day side of Venus as it reflects off the clouds, but on the dark side, WISPR is able to pick up the faint glows caused by the heat radiating off the surface.

“The surface of Venus, even on the nightside, is about 860 degrees,” Wood says. “It’s so hot that the rocky surface of Venus is visibly glowing, like a piece of iron pulled from a forge.”

Scientists say that these new images will help them better understand the geology and mineral makeup of Venus, as these glow at different wavelengths when subjected to heat. This information can be used to help understand the planet and its evolution.

“In addition to the surface glow, the new images show a bright ring around the edge of the planet caused by oxygen atoms emitting light in the atmosphere,” NASA explains. “Called airglow, this type of light is also present in Earth’s atmosphere, where it’s visible from space and sometimes from the ground at night.”

Parker’s next two flybys very likely won’t allow it to image the night side of Venus, but it may get one final chance on its seventh and final flyby in November of 2024.