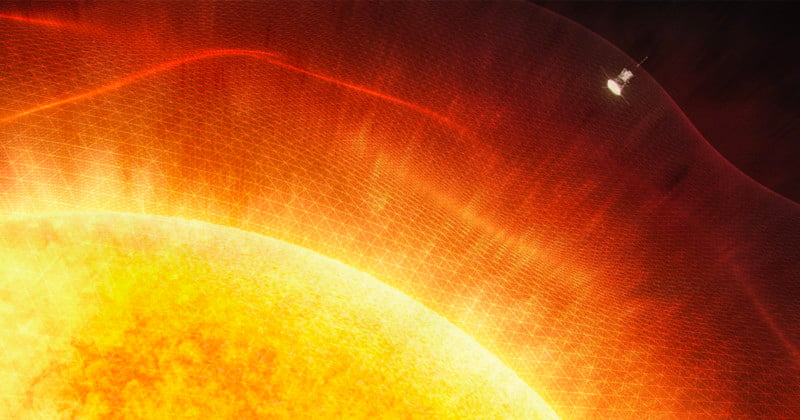 For the first time ever, a spacecraft has touched the sun. NASA has announced that the Parker Solar probe flew through the sun’s upper atmosphere and captured “coronal streamers” up close, something only ever previously seen from afar.

The Parker Solar Probe was launched in 2018 to examine the Sun by traveling closer to it than any spacecraft had ever done previously. Three years later, it finally has achieved that goal.

“Parker Solar Probe ‘touching the Sun’ is a monumental moment for solar science and a truly remarkable feat,” Thomas Zurbuchen, the associate administrator for the Science Mission Directorate at NASA Headquarters in Washington, says.

“Not only does this milestone provide us with deeper insights into our Sun’s evolution and its impacts on our solar system, but everything we learn about our own star also teaches us more about stars in the rest of the universe.”

During its April flyby, the Parker Solar Probe passed in and out of the Sun’s upper atmosphere — called the corona — several times. NASA says that this proved what some scientists had predicted about the star’s surface: it isn’t shaped like a smooth ball, but rather has spikes and valleys that wrinkle the surface. NASA says that discovering where these protrusions line up with solar activity coming from the surface can help scientists learn how events on the Sun affect the atmosphere and solar wind.

“Passing through the pseudostreamer was like flying into the eye of a storm,” NASA explains. “Inside the pseudostreamer, the conditions quieted, particles slowed, and the number of switchbacks dropped — a dramatic change from the busy barrage of particles the spacecraft usually encounters in the solar wind.”

As the Parker Solar Probe passed through the corona, it photographed those coronal streamers and has provided a perspective that had previously only ever been visible from afar, as mentioned, namely during solar eclipses as viewed from Earth.

The Parker Solar Probe will continue to spiral closer to the Sun and will eventually reach as close as 8.86 solar radii (3.83 million miles) from the surface. The next major flyby is scheduled to take place in January of 2022, and NASA says this will likely bring it close enough to fly through the corona again.

“It’s really exciting to see our advanced technologies succeed in taking Parker Solar Probe closer to the Sun than we’ve ever been, and to be able to return such amazing science,” Joseph Smith, Parker program executive at NASA Headquarters, says. “We look forward to seeing what else the mission discovers as it ventures even closer in the coming years.”