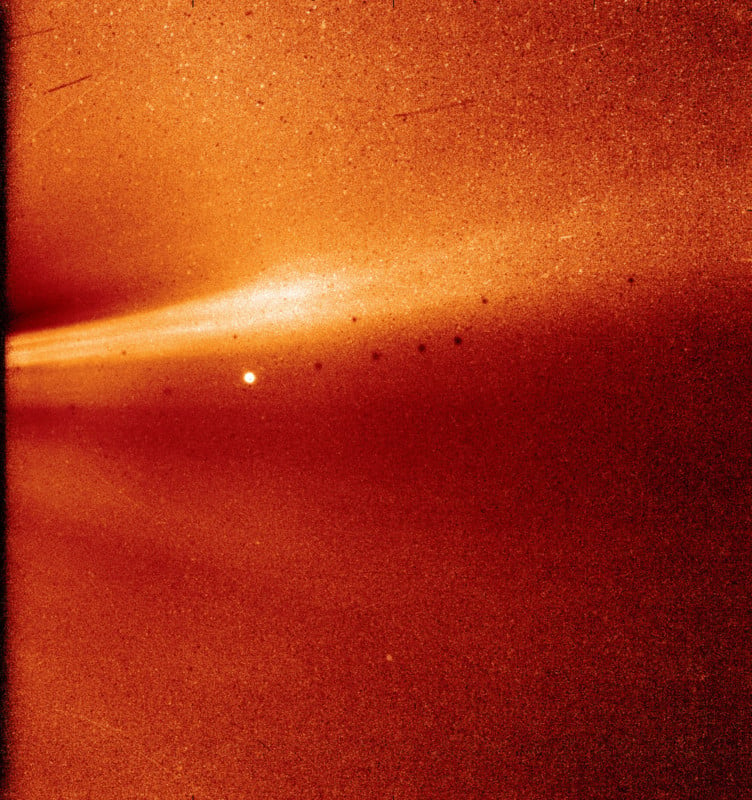 NASA’s Parker Solar Probe is on a mission to explore the Sun’s corona (basically its atmosphere), and the robotic spacecraft recently made the closest-ever approach to a star. NASA just shared a remarkable photo share by Parker: the first photo ever shot from inside the Sun’s corona.

“[T]he science data from the first solar encounter is just making its way into the hands of the mission’s scientists,” NASA writes. “It’s a moment many in the field have been anticipating for years, thinking about what they’ll do with such never-before-seen data, which has the potential to shed new light on the physics of our star, the Sun.

The photo above was captured on November 8th, 2018, while Parker was about 16.9 million miles from the Sun’s surface. Just for reference, the Sun’s diameter is 860,000 miles, and the distance from Earth to the Sun is about 91 million miles.

In the middle of the frame are at least two ejections of solar material, known as coronal streamers, which are usually found in regions on increased solar activity.

And that bright spot of light seen right under a streamer? That’s Mercury, the first planet from the Sun.

P.S. As an aside, Parker is the first NASA spacecraft ever named after a living person. It was named to honor University of Chicago professor emeritus and physicist Eugene Parker. Mounted on the spacecraft is a memory card containing photos of Parker, the names of 1.1 million people, and Parker’s 1958 scientific paper that predicted important things in solar physics.