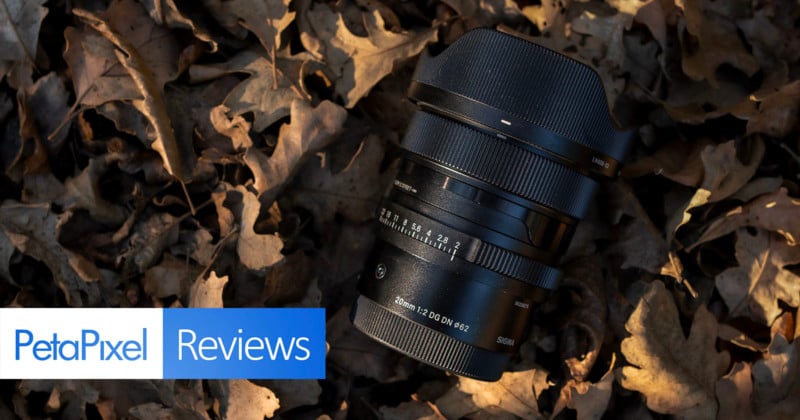 Sigma has sneakily been releasing a number of compact, wide-aperture lenses designed for mirrorless cameras. Already on the company’s seventh addition to the “I” series, the new 20mm f/2 DG DN is now the widest of its kind yet. 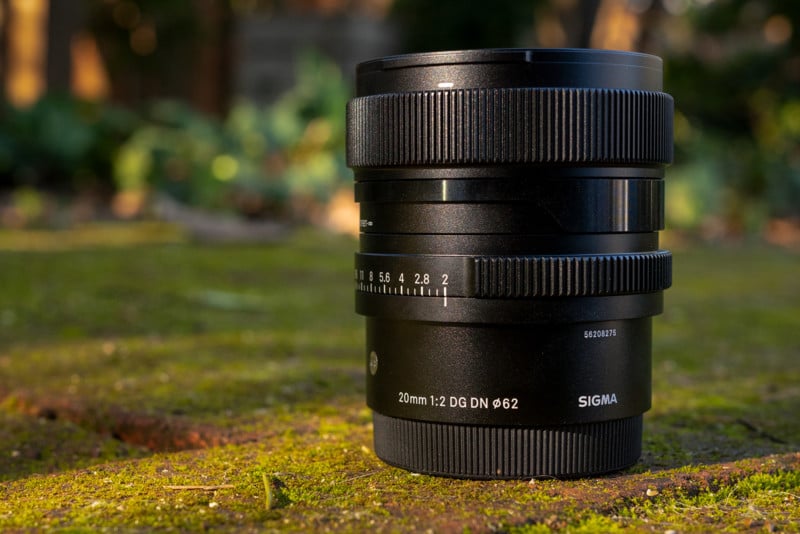 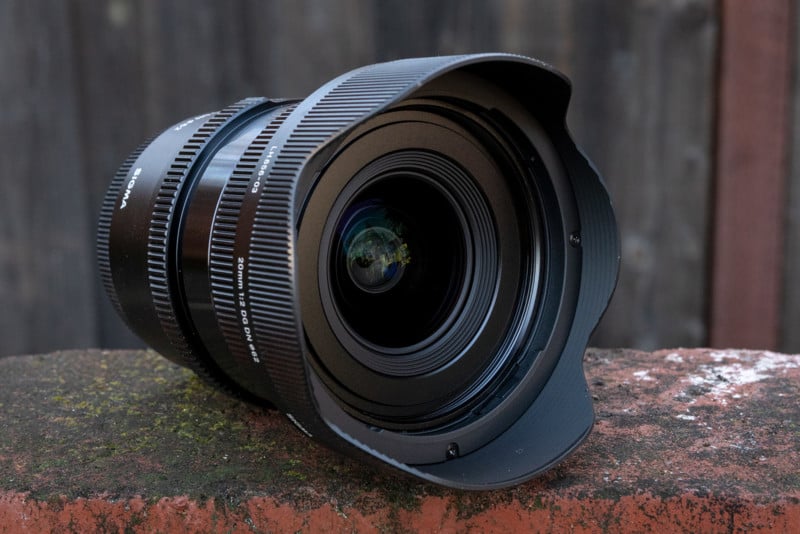 Its compact size makes it easy to take around anywhere without becoming a burden. For most of my review period with this lens, I was using it on a Sony Alpha 7R III that was strapped to my shoulder, and at the same time, I was carrying a different camera with a telephoto lens on it. Typically, this is not the way I shoot but the combination with the small Sigma 20mm made it easy to do.

Looking closer at the lens, there are a few features on the exterior for manual control. There’s a smooth focus ring of course, but in addition to that, there is a nice manual aperture ring and a large AF/MF switch with a satisfying click. If you do not wish to use the clicking aperture ring to manually set the f-stop, there’s an “A” setting that will allow it to be controlled by the camera instead. 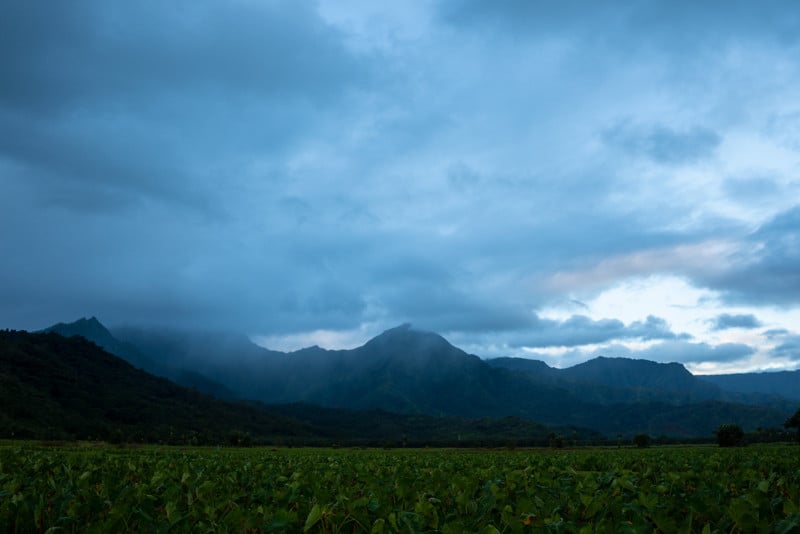 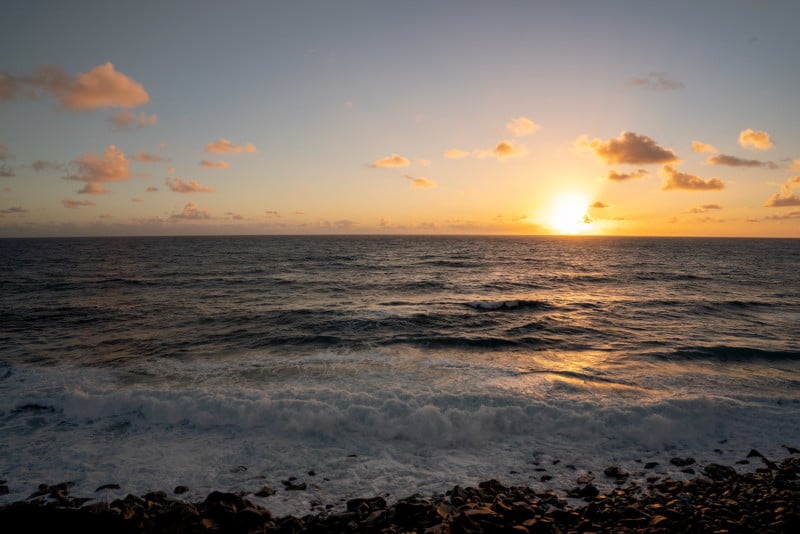 The Sigma 20mm f/2 DG DN features 13 elements in 11 groups including one FLD, one SLD, and three aspherical elements It also uses a nine-blade rounded aperture. You can read more detailed information about its features and construction in PetaPixel‘s news coverage here. In my review period, I never came across noticeable color fringing or aberrations, and all in all, everything was smooth sailing when opening my images to edit.

Testing its sharpness, I took a series of images throughout the aperture range to determine the sweet spots. At the center, I found that wide open at f/2 showed subtle purple fringing that would clean up just one click down at f/2.2 and then fully clear at f/2.5. For optimum sharpness, it looks like the range between f/5.6 and f/7.1 were the best. By f/14 the sharpness was beginning to be reduced due to diffraction, and then f/20 and f/22 were plainly soft. At the corners, the aperture range between f/8 and f/11 showed the sharpest results.

Examining its vignetting with in-body corrections turned off, I thought wide open had a heavy exposure drop. Fortunately, by f/2.8 the vignetting was largely relegated to the corners and by f/3.2 it effectively cleared up to a consistent exposure.

As a wide-angle lens, distortion becomes a concern. Although RAW processing software can usually do a good job of automatically fixing this with a lens correction profile, how much it will have to push and pull pixels to correct it can affect the picture quality. Straight out of camera with corrections turned off, the Sigma 20mm f/2 DC DN I exhibits a level of barrel distortion that is apparent but also isn’t particularly concerning. To fix it and create flat horizons, the edges get stretched up and out which does result in a slight crop of the outside that negates some of that wide-angle field of view. 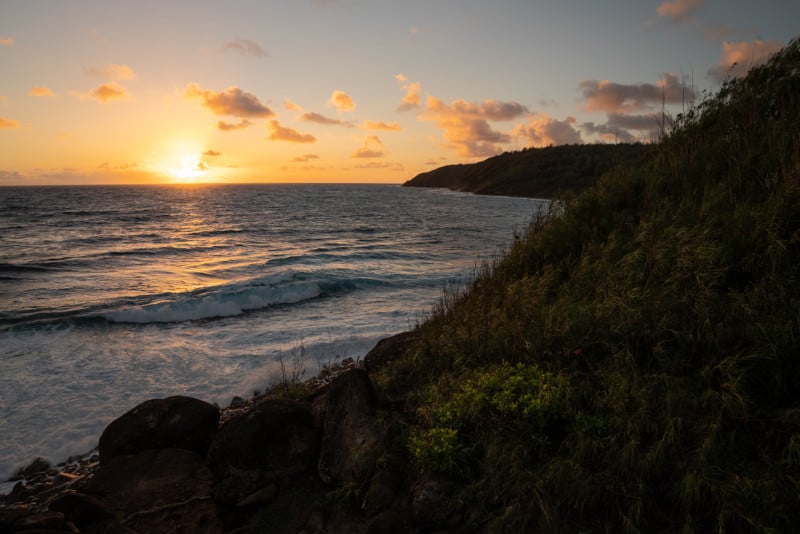 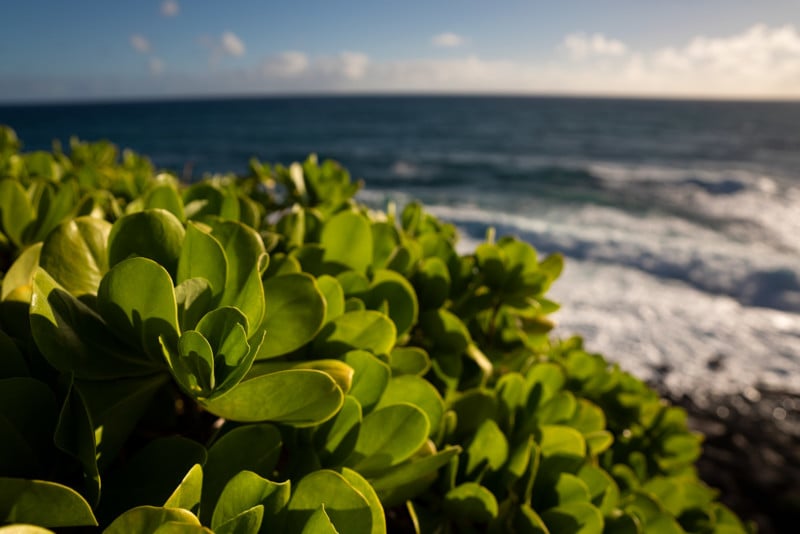 Inside the compact housing, the Sigma 20mm f/2 uses an STM (stepping motor) autofocus system. The lens can focus as close as 8.7 inches (22 centimeters) for a 1:6.7 maximum magnification ratio.

In practice, the autofocus motor is fairly quiet although not silent. It’s also not the most focus-hungry of lenses I’ve used on the Alpha 7R III, taking more of a casual approach to doing focus sweeps. It’s not downright unusable by any means, but when action is unfolding fast the lens needs to be prefocused so that it isn’t missed. 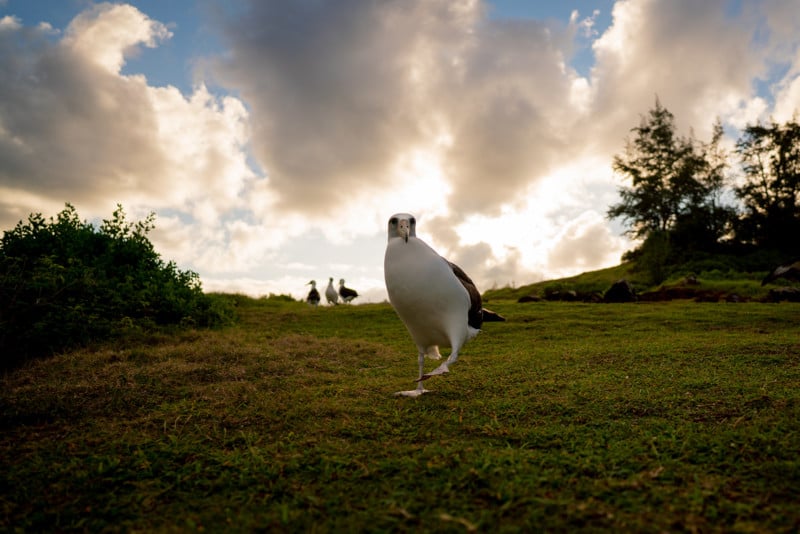 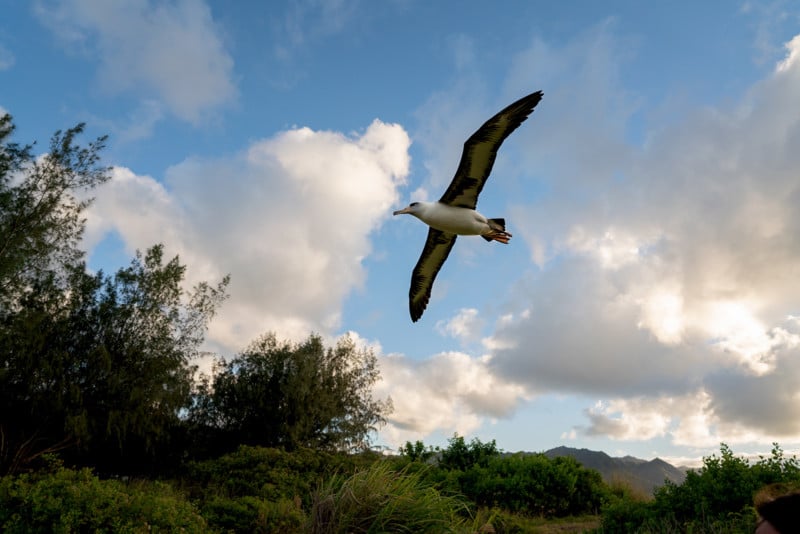 From my hometown, there was an alt-country band called The Gentle Guest, and while writing this review I couldn’t unstick the name from my mind. It’s the perfect way to describe my time with the Sigma 20mm.

These types of lenses are always tough to review because there’s nothing exemplary that demands paragraphs to elaborate on, yet there’s also nothing wrong with it that gives me something to latch on to as its downfall. It does have a compact size considering it’s a full-frame wide-angle lens which makes it simple to put on my camera and forget about. It’s also adequately sharp for most purposes across its aperture range and the metal body means it should be durable for a long time to come. There’s some level of barrel distortion that will automatically get sorted out once lens profile corrections make it to the popular RAW processing software and it needs to be stopped down a touch to get the best performance like many others. It’s a good, capable, mid-priced lens and not much more or less than that. 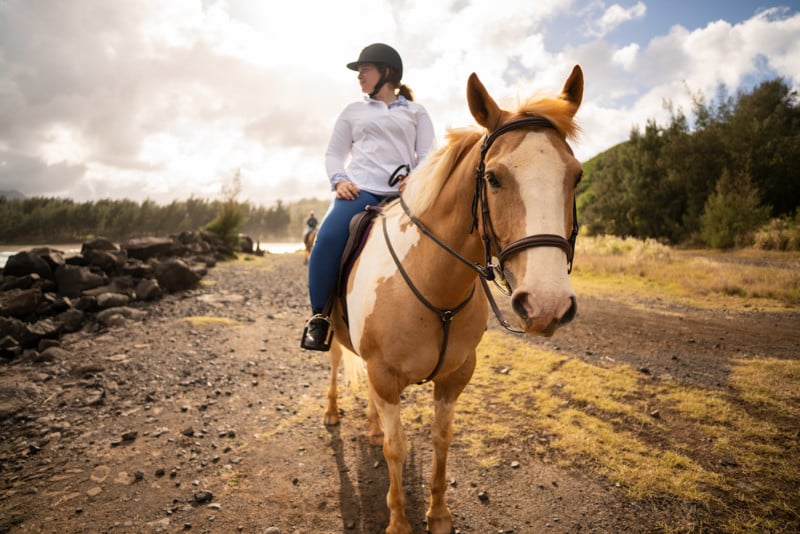 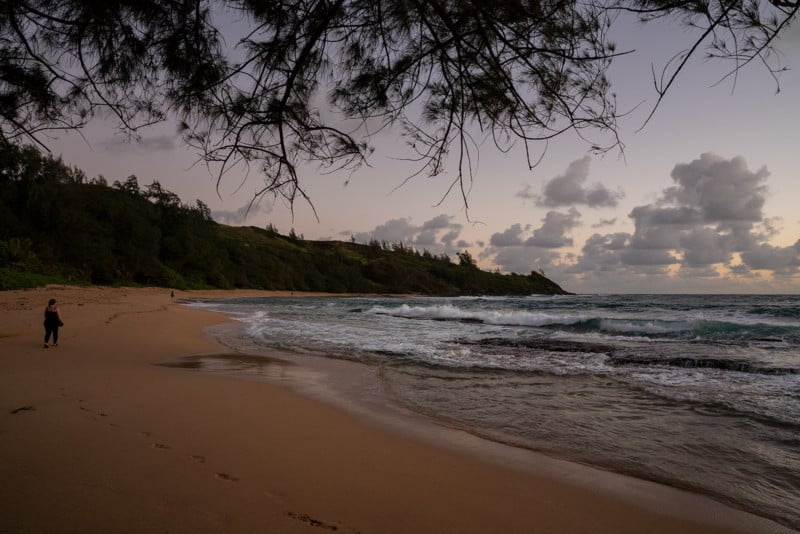 Interestingly, Sigma already has a lens that is remarkably similar to the new 20mm f/2 DG DN. Following all the same design cues and general construction elements, the Sigma 24mm f/2 DG DN Contemporary was released in September 2021. The 24mm has a 10-degree narrower field of view than the 20mm and about an inch further minimum focus distance. For someone like me who struggled to find compositions clean and grandiose enough to validate having 20mm, the 24mm would be a slightly easier lens to manage and carries all the same stuff I liked about using the 20mm.

The Sony FE 20mm f/1.8 G is another contender worthy of comparison when looking at the E-mount variant. This Sony lens weighs nearly the same as the new Sigma despite a plastic exterior, but it’s also slightly fatter and a centimeter longer. The Sony has a leg up with its closer minimum focus distance of 7.08 inches plus the fast dual XD linear focus motors versus the Sigma’s stepping motor. For the pleasure of going first-party here, there’s also a step up in price as the Sony 20mm f/1.8 G is $900. 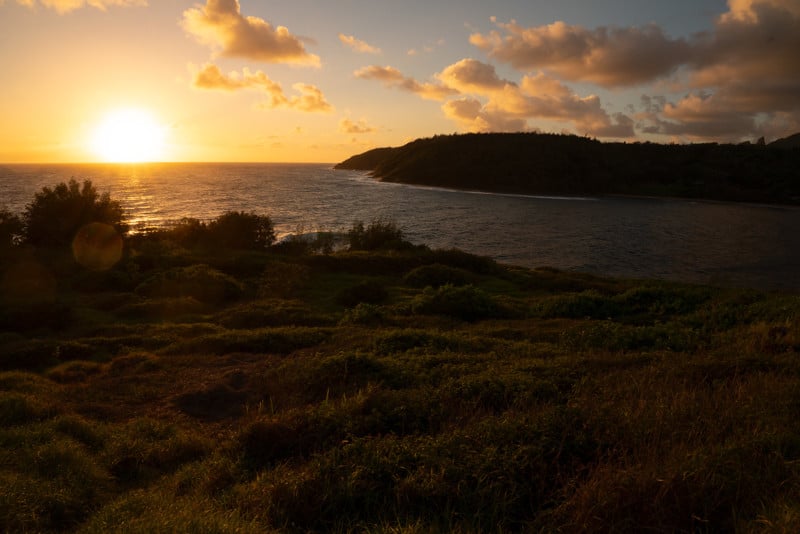 Yes. There are no glaring flaws that make the Sigma 20mm f/2 DG DN Contemporary lens a bad choice.