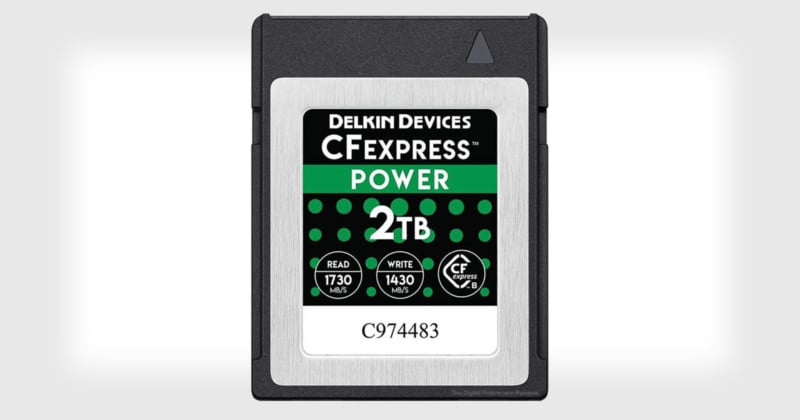 Delkin announced the latest leap in CFExpress technology today by unveiling the world’s first 2TB CFExpress Type B memory card. That’s double the capacity of the previous “world’s largest” 1TB cards, which were first launched by ProGrade Digital in April of 2018.

Delkin has been making CFExpress cards for over a year, but this latest card promises the same top-of-the-line speed for creative pros, while offering double the storage of anything else on the market. Advertised read and write speeds are still shown as 1730MB/s and 1430MB/s, respectively, which should be plenty to support 8K video recording and continuous RAW shooting at high frame rates.

Delkin also promises that its cards have been “extensively tested to ensure full functionality and performance” with the latest CFExpress compatible cameras, like the Canon 1D X Mark III, Nikon’s Z6 and Z7, and Panasonic’s S1 and S1R. Testing is ongoing to ensure full compatibility with the upcoming Canon EOS R5, and the newly released Nikon D6.

The company also promise the “world’s best warranty.” In addition to the industry standard lifetime warranty, Delkin has a “48 hour guarantee” that promises you’ll receive a replacement for a broken card within 48 hours, prior to receiving the non-working card.

Delkin doesn’t say when the 2TB card will be available for purchase, or how much it’ll cost when it is, but expect it to set you back over $1,000. The company’s equivalent 1TB cards currently sell for $700… on sale… with an MSRP of $999.

To learn more about Delkin’s latest memory cards, head over to the Delkin website. And if you want to buy the 2TB card for yourself, keep an eye out for the listing to go live sometime soon.

Photos of Food Arranged Into Beautiful Shapes and Colors