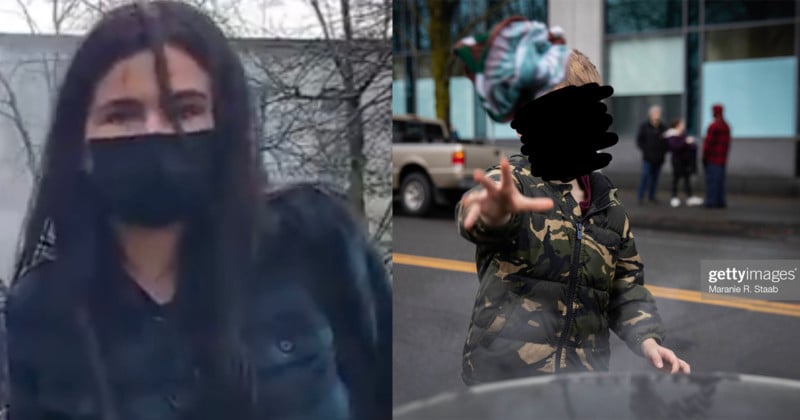 An independent photojournalist who contributes to Getty has been accused of staging a photo of a child throwing a mask into a burning barrel during an anti-mask protest in Portland, Oregon.

Photojournalist Appears to Stage a Photo

In a video posted to Twitter, photojournalist Maranie R. Staab is shown following anti-mask protestors and engaging with them in order to capture staged photos. Staab, who appears masked in the video, can be seen holding her camera and coordinating a photo with a woman and a child.

The course of events took place outside the Oregon Health Authority building in Portland, Oregon. A group was protesting against the state’s COVID-19 mask mandates in a gathering advertised as a “Mask BBQ Party,” organized by Free Oregon.

yeah that was fucking unreal.
she staged the entire thing, talked shit, and a chud streamer recorded it all 😂

video id – photographer, maranie rae, stages a photo op in which a child throws a mask into a burn barrel. the fire is being put out, she helps the child find a mask. pic.twitter.com/2GJ1EW6Qpj

“So hey, let’s wait till- this lady’s gonna take a picture of you, so we’ll wait till she says go,” a woman’s voice can be heard in the video.

Another voice asks if anyone has a mask that they could throw in the smoldering barrel.

“I’d give you this one, but these guys are watching me and they’ll yell at me,” Staab says in response, referring to the one she is wearing and pointing across the street at a group of anti-fascist counter-protesters.

After something resembling a mask has been found, the video shows Staab coordinating with the woman and child to create the ideal photo: 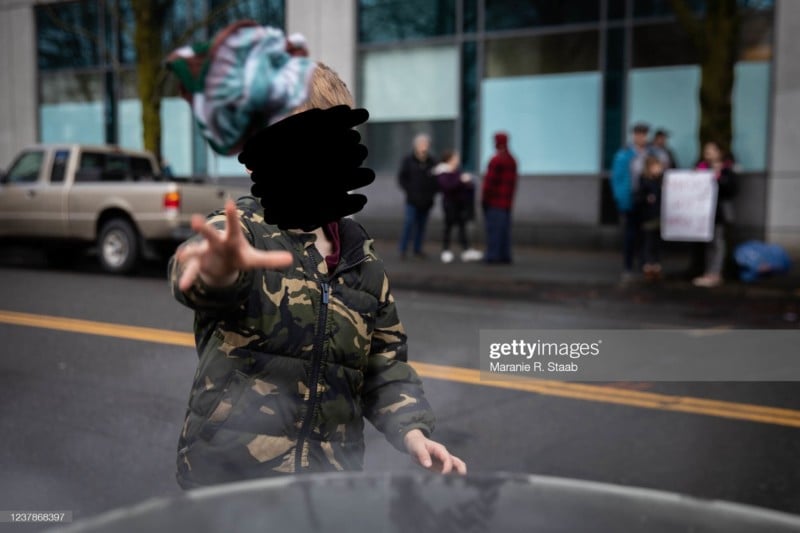 Staab published a set of other images from the rally on her Instagram, several of which show that same barrel and others throwing masks into it. While the video only implicates Staab staging one photo, it does call into question the veracity of the others.

A Breach of Photojournalistic Ethics

Photojournalists by trade document situations but do not partake in them. That much, and more, is said in the list of guidelines published in the NPPA Code of Ethics.

Visual journalists and those who manage visual news productions are accountable for upholding the following standards in their daily work:

5) While photographing subjects do not intentionally contribute to, alter, or seek to alter or influence events.

It’s not just the NPPA’s guidance, however. Other journalists who abide by the normal rules of engagement have come forward to express their displeasure with Staab.

Hannah Yoon, a photographer in Philadelphia, says that this isn’t the first time Staab has been seen blurring the lines of participant and journalist.

“You can be a ‘talented’ photographer and be a terrible photojournalist. This makes me so mad… the general public barely trusts us,” Yoon writes. “I’ve had issues with her practices as a journalist for some time now… but this just takes away any credibility she supposedly had before.”

Sadly, it’s part of a new generation of PhotoJ’s that don’t want to work to find the shot, they’d just rather do whatever the hell they want to do. You’re not the first person to call out her “practices” nor will you be the last.

“I’d expect this behavior from a corporate PR person, but never from someone self-identifying as a photojournalist for a wire service,” Chris Post, an Emmy award-winning broadcast photojournalist for WFMZ in Bethlehem, Pennsylvania says. “Incredibly disappointing! Stuff like this is what gives fuel to the ‘fake news’ movement, we must police our own colleagues.”

I’d expect this behavior from a corporate PR person, but never from someone self identifying as a photojournalist for a wire service. Incredibly disappointing! Stuff like this is what gives fuel to the “fake news” movement, we must police our own colleagues.

“With as much as we get accused of being ‘fake news,’ and as hard as many of us work to earn public trust, this sort of behavior is a total slap in the face,” photographer Sara Naomi Lewkowicz adds.

Staab did not respond to PetaPixel’s request for comment.

Getty Has Terminated its Relationship with Staab

At the time of publication, the photo did not appear publicly listed on Getty, and her most recent photos on the platform are from August of 2021.

Getty confirms that it pulled the photo from its service and terminated its relationship with Staab when it became aware of the video.

“Getty Images holds itself to a high standard of editorial integrity and we have a responsibility to provide faithful and comprehensive documentation of the events that we cover,” a Getty representative tells PetaPixel.

“We will not be working with this photographer in the future.”

Update: Staab has deleted the Instagram gallery containing photos from the protest.

Update on 2/3/22: Reuters is now actively taking down photographs by Staab that it had previously published.

ADVISORY: We are deleting tweets containing photos with the byline Maranie Staab that are associated with Reuters articles

“ADVISORY: We are deleting tweets containing photos with the byline Maranie Staab that are associated with Reuters articles,” the news agency Tweeted on February 2nd, 2022.