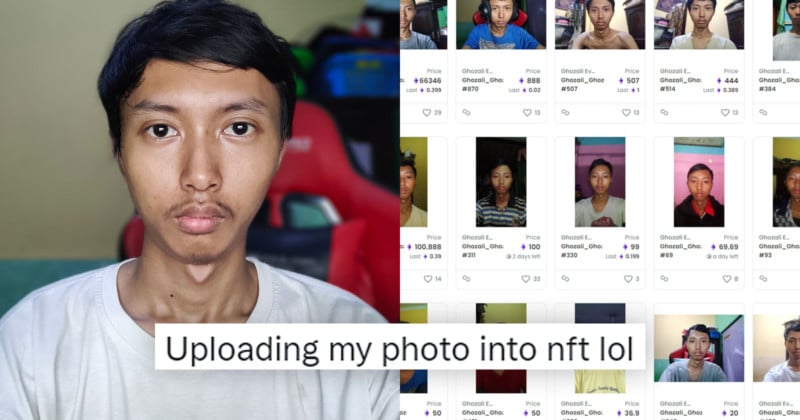 A 22-year-old Indonesian college student has become a millionaire overnight after turning his collection of daily selfies into non-fungible tokens (NFTs) as a joke.

Sultan Gustaf Al Ghozali, a computer science student from Semarang, Central Java, has had a habit of shooting a selfie a day in front of his computer for the past four years, starting from when he was 18 years old. While he has missed some days, his album now contains nearly 1,000 selfies, which he initially shot to create a passage-of-time timelapse in the style popularized by Noah Kalina’s everyday project.

After learning of cryptocurrencies, blockchains, and NFTs, however, Ghozali had the idea of creating a humorous collection of NFTs based on his face photos.

Selfie NFTs Created as a Joke

“I was thinking it might be funny if one of the collectors collected my face,” Ghozali tells AFP. “I never thought anybody would want to buy the selfies, which is why I only priced them at $3 [0.00001 ETH].”

Ghozali began minting his selfies as NFTs on January 1st through the NFT platform OpenSea in a collection titled Ghozali Everyday. 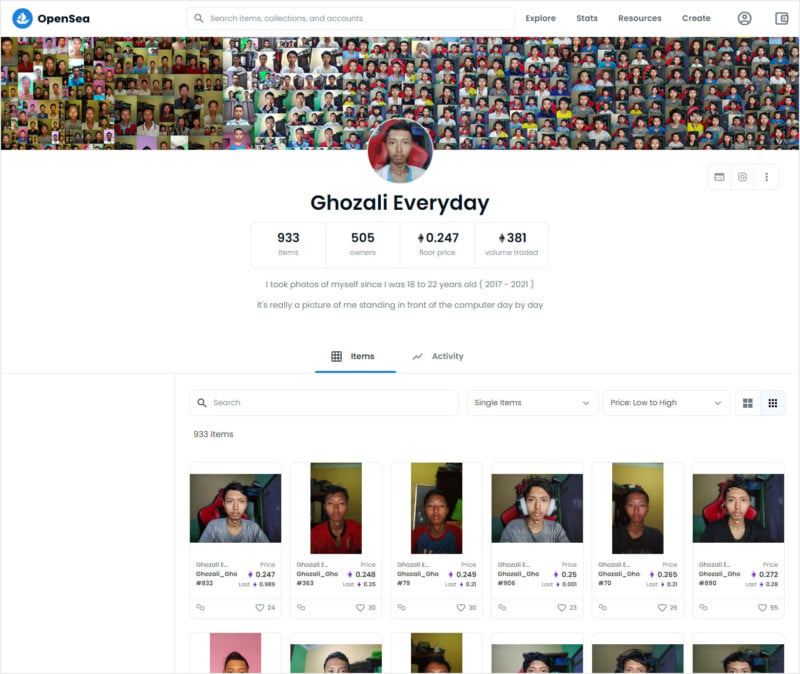 It wasn’t until several days later, however, that the collection began going viral online after Indonesian celebrity chef Arnold Poernomo and other prominent NFT collectors stumbled upon Ghozali’s “joke.”

Over $1 Million in Sales

Once the crypto influencers began promoting the collectibles, sales of the 933 exploded. The price of individual Ghozali selfie NFTs spiked at one point to a high of 0.9 ETH each, or about $3,000. The collection has a total volume traded (at the time of this writing) of 381 ETH, or over $1.2 million. 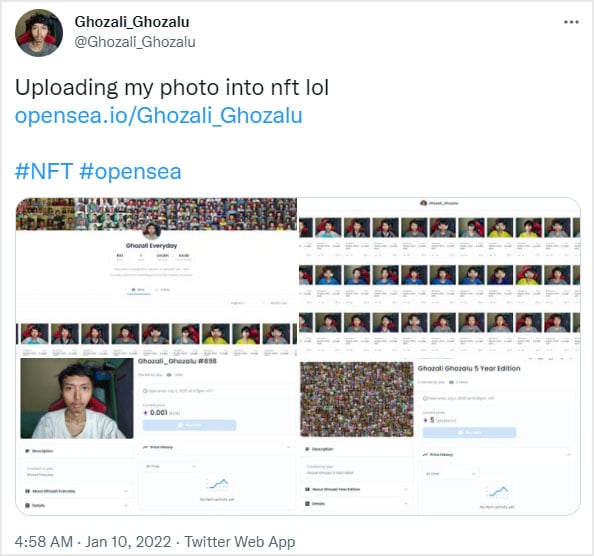 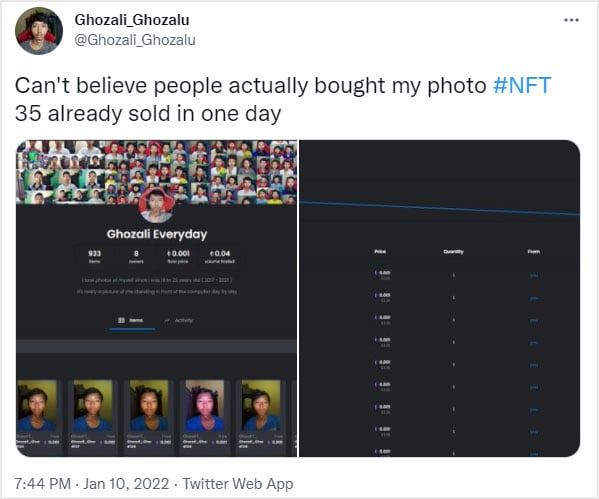 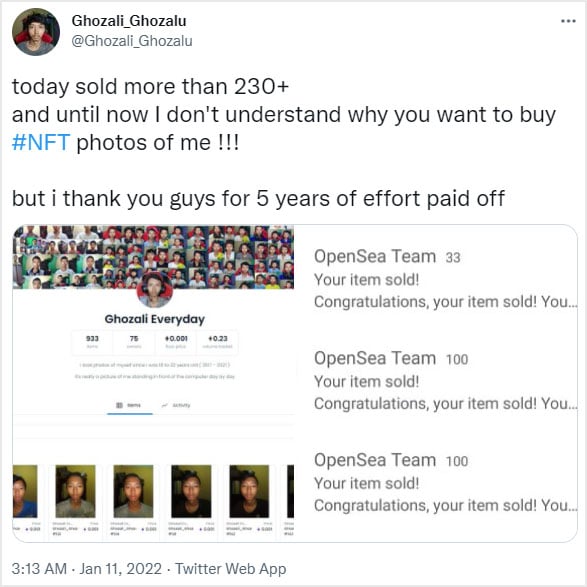 “Today sold more than 230+ and until now I don’t understand why you want to buy #NFT photos of me!!!” Ghozali Tweeted the following day.
But I thank you guys for 5 years of effort paid off.”

In addition to his initial profit from sales, Ghozali has earned over $100,000 in secondary sale royalties from the NFTs changing hands, VICE reports.

With his face making international headlines and with interest in his NFTs growing, Ghozali is requesting that people be respectful with his portraits.

“You can do anything like flipping or whatever but please don’t abuse my photos or my parents will [be] very disappointed [in] me,” he Tweets. “I believe in you guys so please take care of my photos.”

NFT Mania in the Crypto Boom

NFTs are non-interchangeable records stored on a blockchain that allows uniquely identifiable units of data (e.g. photos, videos, audio) to be bought and sold as limited-edition digital collectibles. The mania surrounding NFTs has seen some tokens sold for astronomical prices — the most expensive NFT sold to a single owner is Everydays: the First 5000 Days by the digital artist Beeple, which sold for a staggering $69.3 million at a Christie’s auction in 2021.

Read also: What is an NFT and Why Should Photographers Care?

DappRadar reports that $10.7 billion and $11.9 billion worth of NFTs traded hands in the third and fourth quarters of 2021, and that NFT sales continue to look strong in 2022.

Whether NFTs are a Beanie Babies-style speculative bubble that is doomed to crash remains to be seen, but Ghozali now joins the ranks of NFT artists who have made a fortune through selling digital collectible images.

“To be honest I still haven’t got the courage to tell my parents,” Ghozali tells AFP. “They would be wondering where I got the money from.”

As with other newly-minted crypto-related millionaires around the world, Ghozali’s newfound wealth has attracted the attention of local tax authorities, which reached out to him via Twitter to remind him of his obligations. 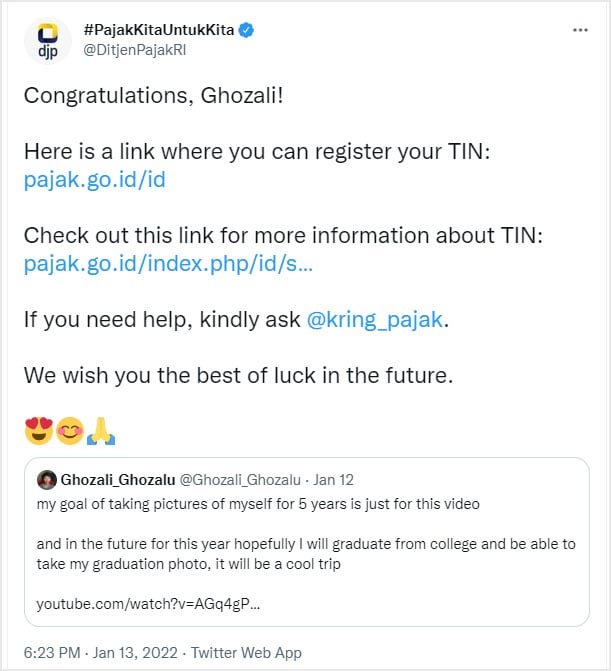 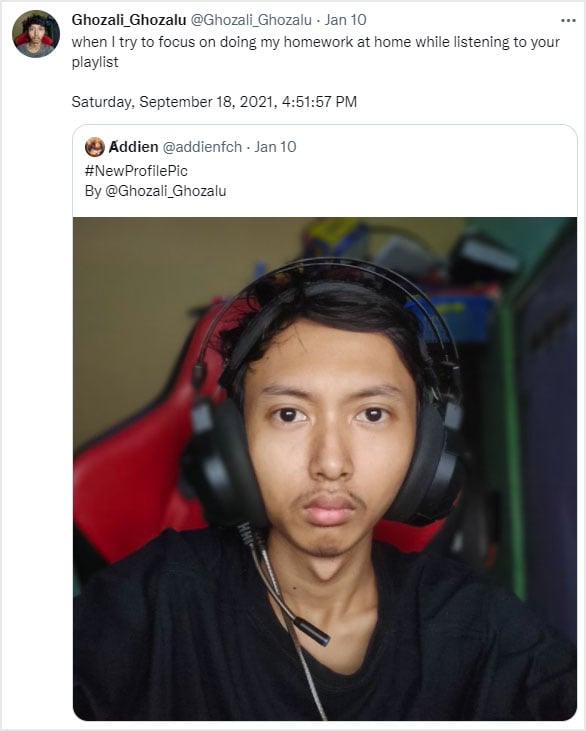 “This is my first tax payment in my life,” Ghozali responded. “Of course I will pay for it because I am a good Indonesian citizen.”