Canon has announced the EOS R5 C, what it calls a “true hybrid” full-frame mirrorless camera that bridges both its stills-focused EOS technology with Cinema EOS into one robust, actively-cooled, super-thick camera body.

The EOS R5 C is both a fully-functional R5, a camera originally launched in July of 2020, that retains just about all of the original photography capabilities and adds to it unlimited video recording and Canon’s Cinema EOS menu options thanks to the addition of a large active cooling system that has been attached to the rear of the original R5 chassis design. As such, it still features dual card slots (SD and CFexpress), a 3.2-inch variable-angle LCD monitor, and a high-definition 5.76 million-dot viewfinder.

Let’s first discuss the elephant in the room: the EOS R5 is a thick camera thanks to the addition of a huge active cooling system (which negates overheating issues that plagued the original) that wasn’t present on the original R5. But thanks to its inclusion here, the R5 C can record uninterrupted, non-stop clips in 8K at up to 60 frames per second RAW video. The R5 C can shoot with no limits in any of its video formats as well. In stark contrast to a suggestion that the original R5 could only record 8K for marketing reasons, the R5 C appears to take 8K extremely seriously. 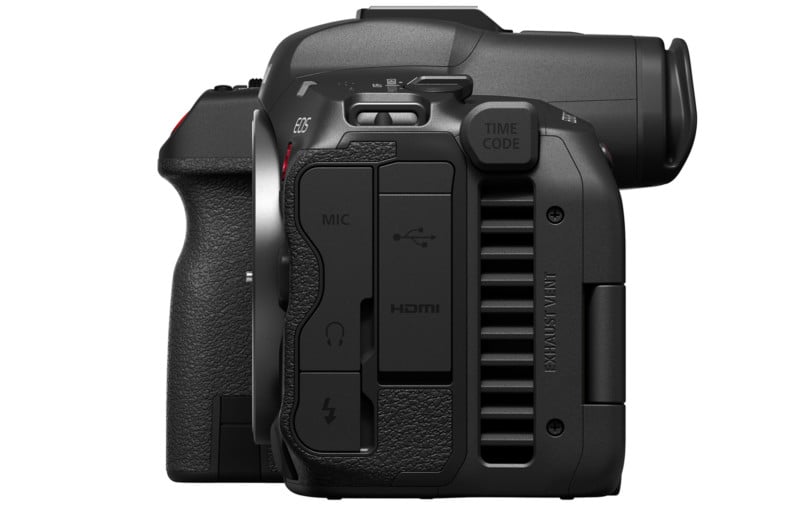 The EOS R5 C can shoot 8K HDR in Hybrid Log Gamma (HLG) and Perceptual Quantization (PQ) formats. It can also shoot in Canon Log 3, includes a Timecode terminal for multi-camera shooting situations, includes the company’s new multi-function shoe which allows compatibility with first and third-party accessories (the TASCAM CA-XLR2d-C XLR microphone is a confirmed third-party accessory), and has 13 total marked and assignable buttons for customization. 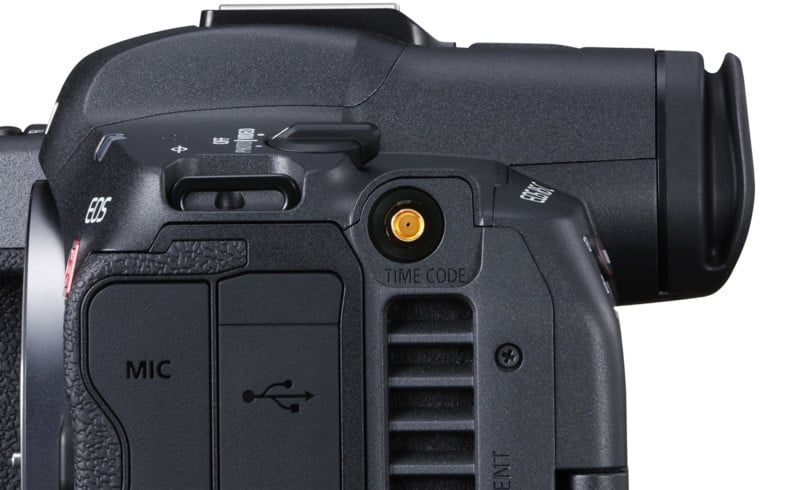 The caveat to the RAW video claims is that 8K at 60 frames per second is recorded in the company’s “RAW Light” format, which is found in some of its other Canon Cinema EOS cameras like the C300 Mark III and the C500 Mark II. Canon says RAW Light captures the full dynamic range of the sensor and provides video data with a “cinematic look” that can be optimized for advanced grading an HDR. Additionally, Cinema RAW Light now has three newly-developed modes: RAW HQ (high quality), RAW ST (standard quality), and RAW LT (light recording). That means that, as confusing as it might sound, it is possible to record Canon Cinema RAW Light High Quality. All three modes are 12-bit regardless of frame rate and the EOS R5 C can also record 8K video in MP4 format as well as XF-AVC in a .MXF wrapper for simple compatibility with non-linear editing systems (NLEs) and existing workflows. The camera also has USB Video Class (UVC) connectivity which enables out-of-the-box use as a streaming camera.

The camera supports RAW output via HDMI for ProRes RAW recording with a compatible external recorder, which allows it to shoot in Apple ProRes RAW at up to 8K 30P. Proxy data can also be simultaneously recorded to an SD card in-camera.

The R5 C can shoot at up to 120 frames per second at 4K in 4:2:2 10-bit with no crop on the sensor, and the company’s excellent Dual Pixel autofocus is functional as well, even in high framerate capture. The EOS R5 C camera can record .WAV audio as a separate file from video, which the company says virtually eliminates the need for separate audio recording. 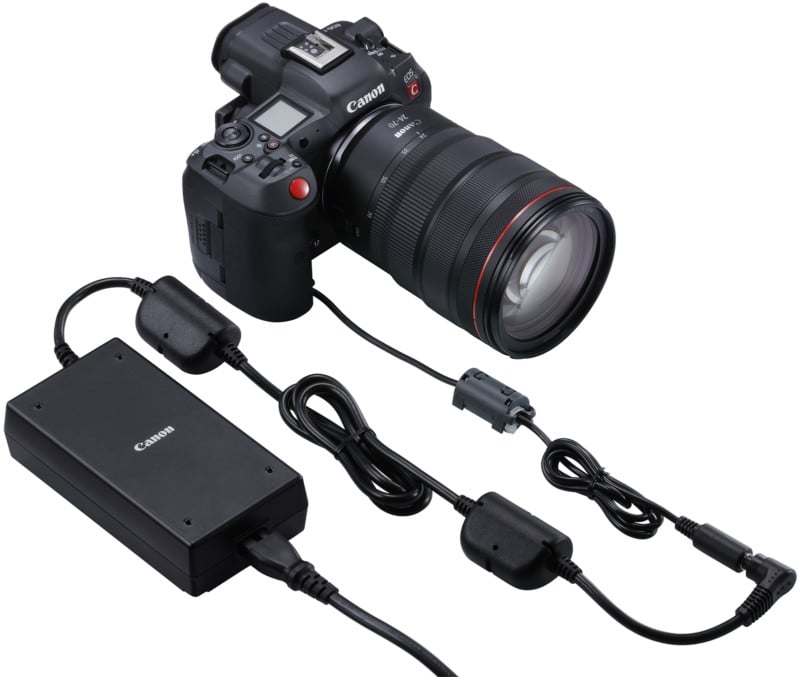 AC power is possible with the R5 C, but it requires an AC adapter plus a DC coupler (Canon has launched the new DC Coupler DR-E6C as a result). The USB Power Adapter PD-E1 is not compatible with the EOS R5 C. Additionally, the camera can only operate at maximum capability when armed with either external power (either through a wall outlet or a compatible external battery pack) or with the LP-E6NH battery. While the LP-E6 and LP-E6N can work, users won’t get as much recording time per charge, and frames per second in still mode will be limited.

One of the major changes other than the active cooling system is that the R5 C does not have any in-body image stabilization (IBIS). Canon did not say why this was left out, but it may be for the same reason Panasonic did not include stabilization in the GH5S: cinematographers often prefer cameras without it. 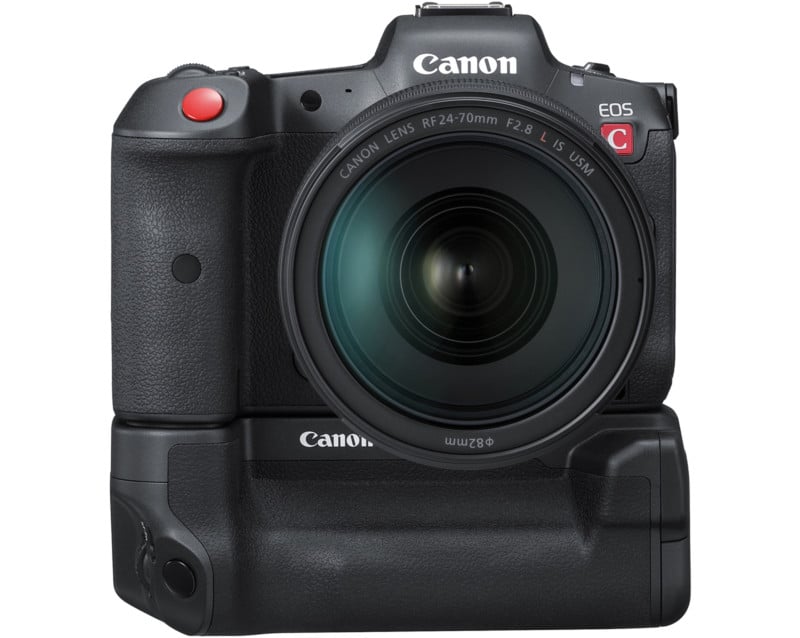 The Canon R5 C features a prominent photo and video switch on the top of the camera that goes beyond what similar toggles on Canon cameras have done in the past. When toggled to Photo mode, the camera acts pretty much identically to the original R5 (outside of the exclusion of IBIS), and the menu will look identical to the original camera. But when switched into Video mode, the camera activates the Cinema EOS menu and operates like a Cinema EOS camera. This decision separates the two modes beyond what is normal for Canon and even other manufacturers (Leica has toyed with similar features in its SL series, but not to this degree) and could very well make it feel like two distinct cameras packed into one body. 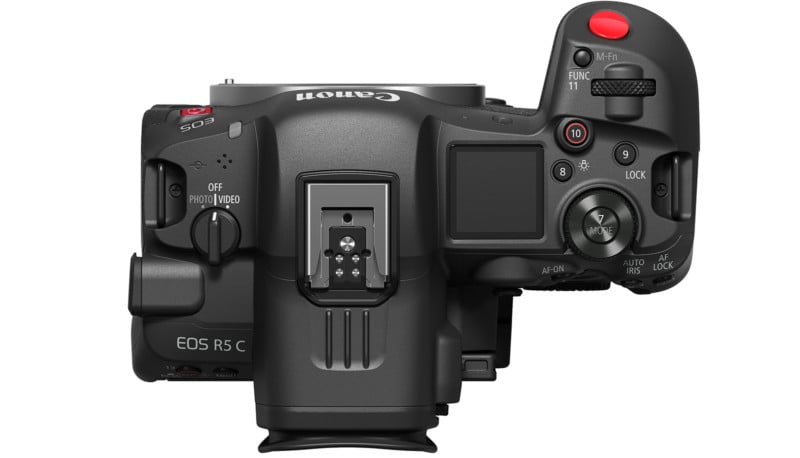 The R5 C still features Canon’s 45-megapixel high-resolution sensor and is paired with its DIGIC X image processor that provides an ISO range of 100 to 51,2000, expandable to 102,400. The same 1,053-point Dual Pixel autofocus is available as the one found in the original R5 as is the continuous shooting speed of up to 12 frames per second in mechanical shutter mode and 20 frames per second in silent electronic shutter mode.