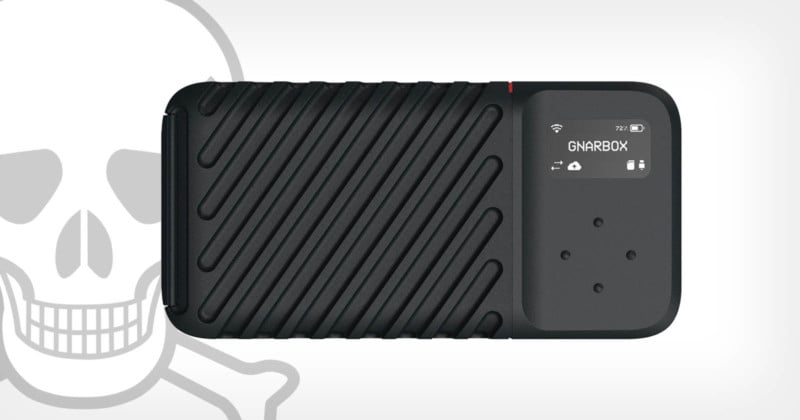 GNARBOX appears to be dead. The company behind the popular rugged backup device has seemingly gone dark, leaving customers without support and turning the product into an expensive portable drive with no extra functionality.

The original GNARBOX device was launched via Kickstarter back in mid-2015 and ended up raising over $540,000 in crowdfunding. It was marketed as the “world’s first mobile solution for viewing, backing up, editing, and sharing your HD footage from any GoPro HERO or DSLR camera.”

Read also: Hands On with GNARBOX for Storing and Editing RAW Photos On the Go

The device used a smartphone app to make it easy for creators on the go to back up, view, edit, and share without having to lug a laptop around.

Following the success of the original device, the company launched the GNARBOX 2.0 in 2018 along with four new apps for backing up files, previewing raw photos, making rough cut videos, and projecting work onto a bigger screen.

While it seems that GNARBOX has made good on its promises to get the initial production devices into the hands of its Kickstarter backers, the company seems to have gone completely quiet in recent weeks.

The GNARBOX app has disappeared from the Apple App Store, making it so owners of the device can no longer use it for all the main features they purchased it for. This also presents an unforeseen problem for new customers interested in buying the device, which is still in stock and being sold on the GNARBOX website and by retailers such as Amazon, Adorama, and B&H.

Customers have also noticed the lack of activity and response from the company and are sharing warnings on social media.

I'm having this same issue, and can;t get through to their customer support. Think my Gnarbox has now become a brick…

Don't count on your Gnarbox working for much longer, the app is'nt available on the app store and emails to support go unanswered. Seems as though they may have gone out of business…

Hey @lensshark do you know what’s happening with @GNARBOX? App is no longer on the iOS/IPadOS App Store, and they seem to have be all quite on the socials front since early November.

Great product, that I hope won’t be a useless pile of plastic if I can no longer get the app…

On social media, GNARBOX’s accounts on LinkedIn, Instagram, Facebook, and Twitter have not had any activity since early November (and most have been quiet for many months).

The company’s online support system is offline, and all of PetaPixel‘s emails to the company and phone calls to co-founder and CEO Tim Feess have gone unanswered.

It is alarming that GNARBOX products are apparently still being sold while the required iOS app and customer support are no longer available. PetaPixel will update this article if GNARBOX responds to our repeated requests for comment, but until then, it may be wise to hold off on spending $600 on what will likely be just an oversized 512GB portable SSD drive when you can purchase a slim and rugged SanDisk Extreme PRO portable SSD with four times the capacity (2TB) at half the cost ($300).

Update on 12/31/21: The corporation behind GNARBOX the product is Mygnar, Inc., which is incorporated in Delaware but which has a branch in Santa Monica, California, where its headquarters are (or were). An online search for the corporation shows that its status changed from “Active” to “Forfeited” in around October 2021.

Update on 1/4/22: The GNARBOX app has returned to the Apple App Store. PetaPixel has yet to hear back from the company in response to our requests for comment.