First unveiled to the world back in July 2015, GNARBOX is a new storage device designed to allow photographers and videographers to back up, edit, and share their RAW photos and 4K videos without having to haul around a laptop.

The project received a considerable amount of attention when it was announced and went on to raise over half a million dollars through its Kickstarter crowdfunding campaign. The first production units started shipping out to the nearly 3,000 backers in November 2016, and today is the first day the GNARBOX is available to the general public.

We got our hands on a pre-release unit of the GNARBOX to put it through its paces and see whether it’s a worthy companion for traveling photographers. The GNARBOX is about the size of a standard cell phone in your hand, except it’s more than twice as thick. Found inside its thick plastic shell, which feels slightly rubbery, are 128GB of solid state storage, 4GB of RAM, an Intel Quad Core 1.92GHz CPU, a dedicated Intel 4 Core HD Graphics GPU, and a battery that lasts 7 hours. 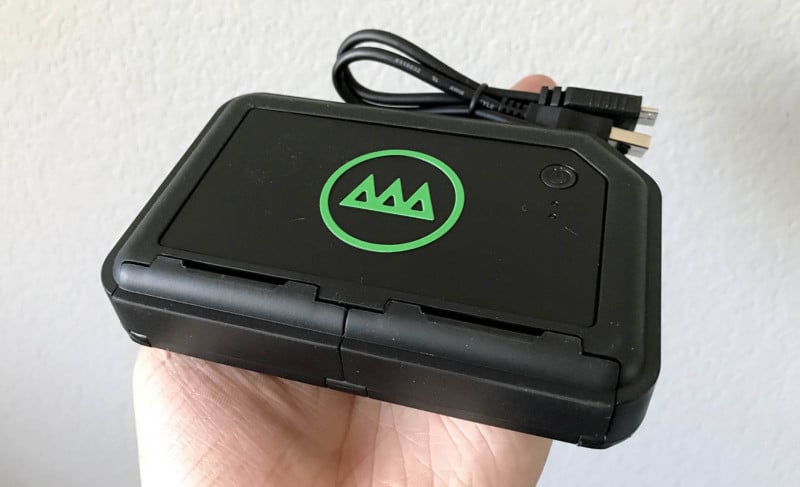 Once you take the GNARBOX unit out of its cardboard packaging — the simple setup instructions are found inside the cover — you’ll need to first charge the unit for a while using the MicroUSB 3.0 port, which is found on the side of the device under a door along with a USB 2.0 port and a USB 3.0 port. (As a minor note: this door is extremely difficult to pry open on our unit.)

A second door hides two memory card slots: a SD one and a MicroSD one. If you’d like to connect a CompactFlash card, you’ll need to bring along a separate card reader and plug it in via USB. (This door didn’t require the sacrifice of a thumbnail to open.) 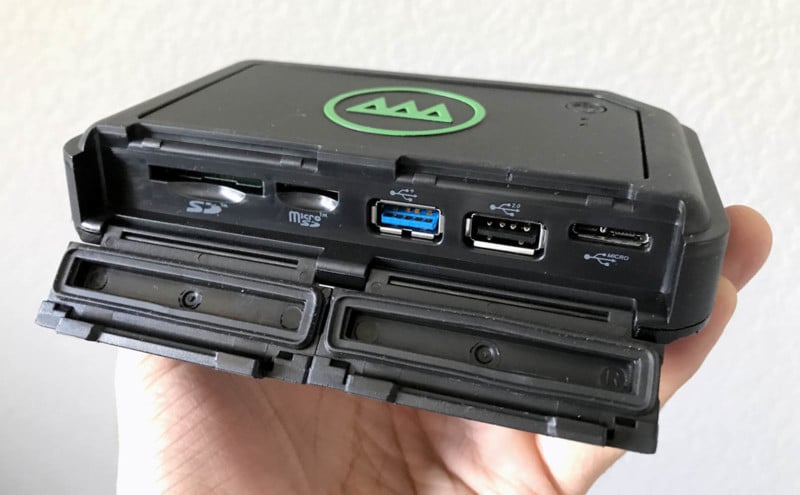 The Quick Reference guide that comes in the box doesn’t tell you much beyond the few basic introductory steps. You’ll need to read the online user guide for a more complete understanding of how to use the device.

After powering the GNARBOX on, you’ll find a new Wi-Fi network being beamed from it called “MyGNARBOX.” Join this network with your phone and enter the password found inside the box (e.g. “gnarbox!”). Once connected, download and open up the GNARBOX app to get started. 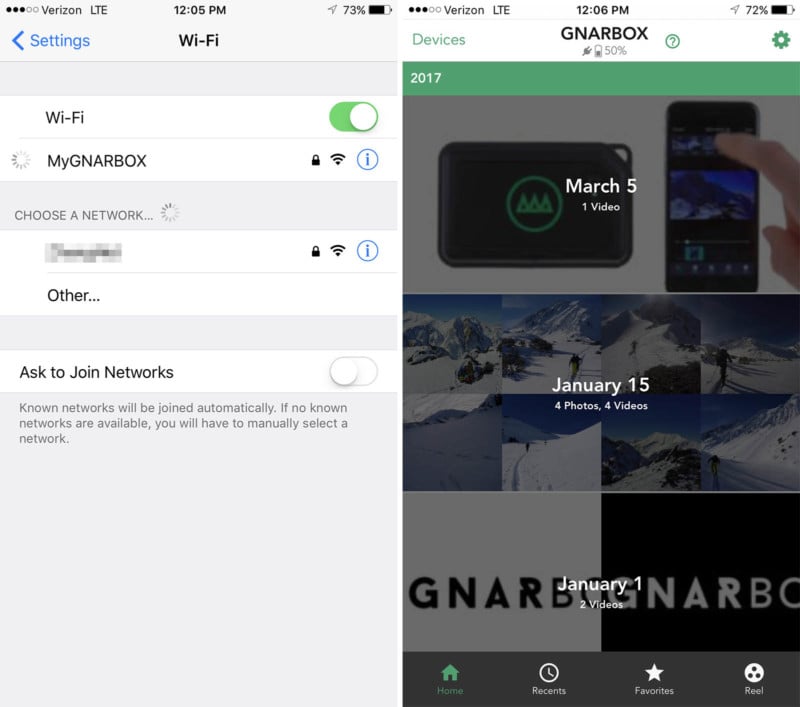 For now, GNARBOX is designed for dedicated cameras — things like DSLRs and GoPros and drones. The process of transferring data to GNARBOX revolves around the memory card slots and USB ports, so you can’t easily beam your iPhone photos to it… yet (the ability to grab photos from your phone may be coming in the next update). 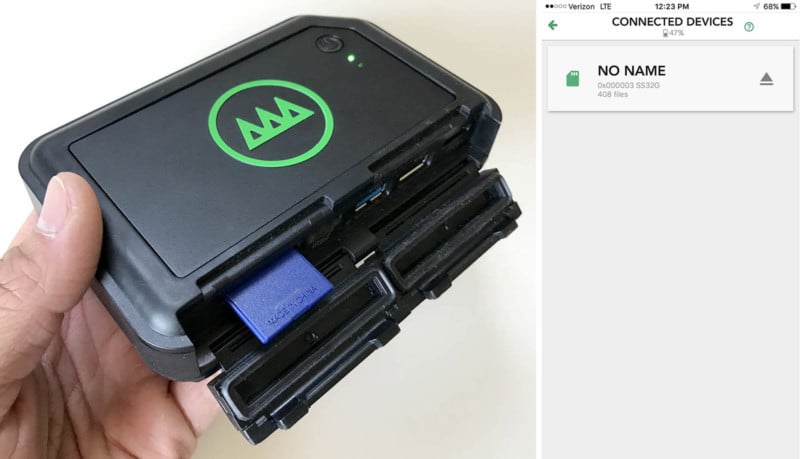 When you plug a memory card or device into GNARBOX, you’ll see it immediately appear in the Connected Devices page of the app. Tapping the new entry brings up a gallery view of all your photos and videos on the device. Thumbnails are displayed even for RAW files. You can select some or all of the photos, and then press “Copy Files” to have them backed up onto GNARBOX. 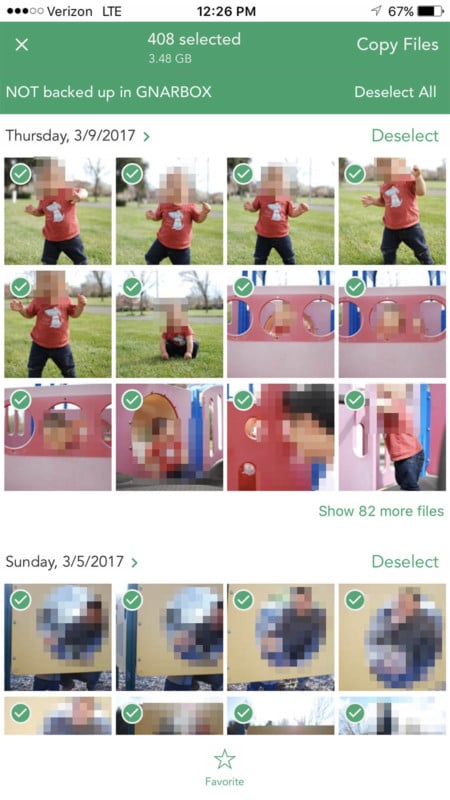 Despite having quad-core processors and a dedicated GPU, working with RAW files does come with some lag time. Thumbnails take a little while to fully generate, and a full screen preview takes a few moments to go from pixelated to sharp. Once previews are generated, though, working with the files is a breeze.

The photo editing screen features a number of adjustments you can make to JPEG or RAW photos: Exposure, Contrast, Highlights, Shadows, Punch, Whitepoint, Midpoint, Blackpoint, Saturation, Temperature, Tint, Intensity, and Crop. Tapping the photo lets you compare your in-progress edit with the original, and there’s an option for undoing your changes as well. The video editing screen allows you to Trim, export frames, and add clips to a Highlight Reel — all while working with 4K files. 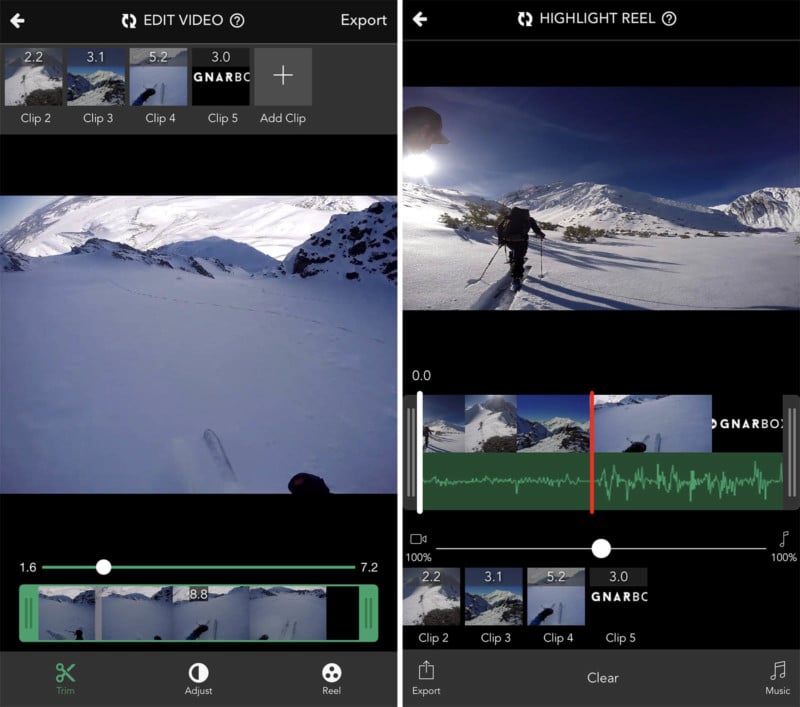 While these tools won’t replace more powerful editing apps out there, they’re definitely an easy way to spruce up your content a little for simple sharing while you’re on the go. And since everything is done within the GNARBOX app, you don’t need to worry about moving files from device to device and app to app for editing and sharing. 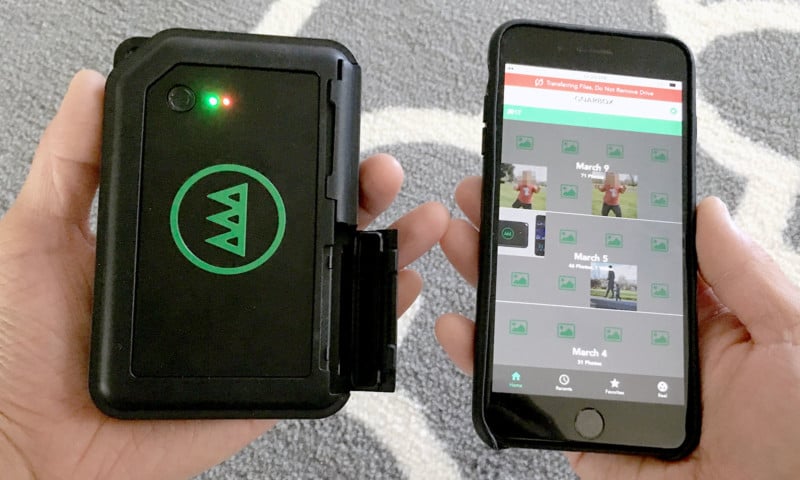 If you’re a photographer who’s looking for a single solution for backing up your photos, editing them, and sharing them while you’re traveling, GNARBOX is worth looking into. You’ll be able to easily back up your camera’s photos, do some simple post-processing, and share them with the world using only your phone and leaving your laptop out of the equation.

Also, once a future update opens up the system to your phone’s photos, it’ll also serve as a quick way to free up space on your phone during long trips if you’re constantly low on storage.

GNARBOX is now available for $299 from B&H, Adorama, and Amazon.

Full disclosure: GNARBOX provided the pre-release unit tested for the purpose of this review.