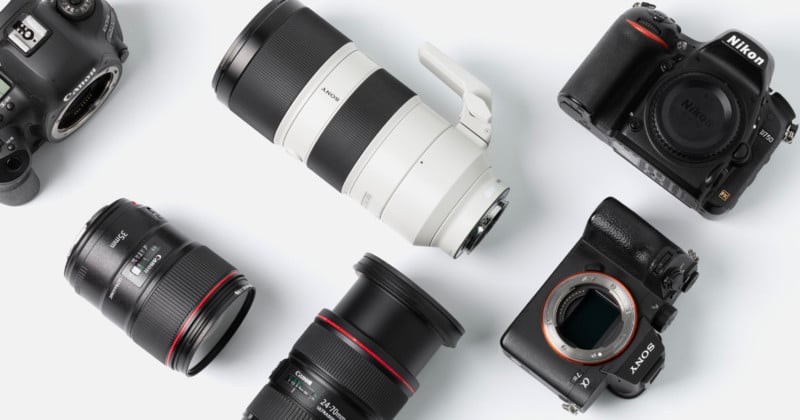 While the Sony Alpha 1 was the most rented piece of new equipment in 2021, Lensrentals has published its most popular gear rented overall, and Canon cameras and lenses dominate the list.

As one of the largest rental houses in the world, Lensrentals has a unique perspective into the popularity of equipment by actual photographers and videographers. Its data can help provide context and show trends in the industry. Over the last several years, Lensrentals has tracked which manufacturers are making the most popularly rented equipment and looking back over the last four or five years, that answer has always been Canon, and 2021 was no different.

Below are the most popularly rented pieces of photo and video equipment ranked from most popular to least:

Lensrentals notes that one of the more significant talking points is that the Canon EOS R5 jumped to number one on the list for 2021 in just one year. It was only announced in the latter half of 2020 and on backorder for a good chunk of that time, but seeing it’s explosive popularity this year shows the strength of Canon’s brand and its mirrorless RF mount. On that note, however, the Canon 5D Mark IV makes its second consecutive appearance at number two, signaling that while DSLRs might be “dead” to many photography enthusiasts, the Canon EF mount is still very much alive in the rental market.

Speaking of lens mounts, Canon owns more than 50% of the total rental market between the RF and EF camera mounts, as shown below. That said, the EF mount dropped in popularity by nearly 4% and the RF mount only made up 1.84% of that. Sony’s E-mount grew in popularity as well, at least in camera bodies. 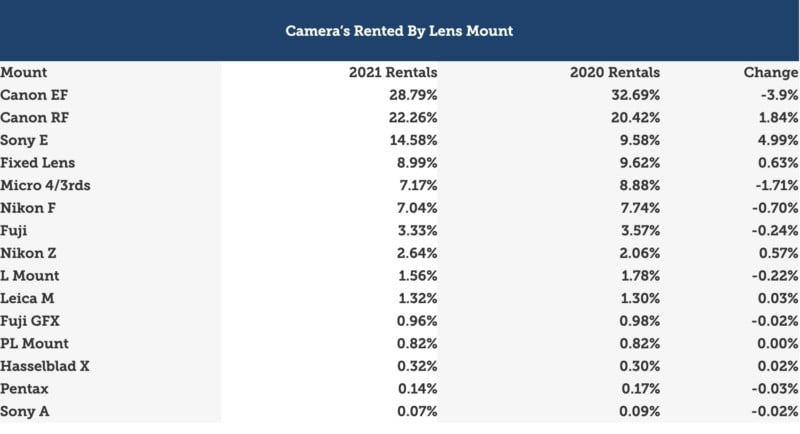 In the lens department, the EF mount continued its decline but the RF mount boomed up more than 5%, giving Canon still more than 50% share in lenses. Sony remained pretty flat here, but still grew slightly.

This leads into a discussion of market share, where Canon has for years dominated the top spot. That hasn’t changed this year, and while Sony managed a nice 4% growth in popularity, Canon, which had been slipping up until last year, again increased its share — albeit only slightly.

This continued increase, although small, is a reversal of its pre-mirrorless trends and indicates that Canon’s shift away from DSLRs was a smart move, even if the 5D Mark IV continues to be extremely popular. Sony continues to also climb up in its overall rental share, and before the RF mount really came into its own, it looked like Sony’s ascent was at the cost of Canon. Over the last two years though, both companies appear to be moving in a positive direction. This year even Nikon, Panasonic, and Fujifilm all saw increases in market share, although each is vying for single digits. Nikon in particular, who is considered one of the “big three” camera manufacturers, is painfully behind Canon and Nikon. Nikon’s Z9 looks promising, however, but it remains to be seen if it will have enough product to meet demand or popularity to make a meaningful dent in either Canon or Sony’s dominance.

To look over all the data and read Lensrentals’ thoughts on the last year, make sure to read the company’s blog post.