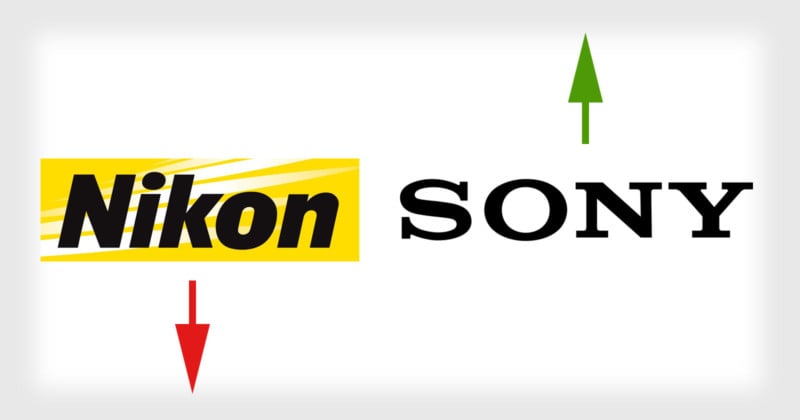 Canon and Nikon, watch out: Sony is on the rise. Just months after Sony claimed the #2 spot for full-frame interchangeable lens camera sales in the United States, Sony has also passed Nikon at the largest online camera gear rental business in the US.

LensRentals recently shared with PetaPixel its annual list of the most popular equipment rented for 2017, and Sony’s rise is one of the main conclusions the company took away from the data.

“Sony has overtaken Nikon for #2 in the popularity stakes,” a LensRentals spokesperson tells PetaPixel. “We’d hinted at this being the case in 2016, but it’s clear this year.”

Here’s a spreadsheet showing the most popular camera products that have been rented out in 2017:

But it’s not just this one popular lens’ ranking that shows Sony’s rise: LensRentals tells PetaPixel that the overall volume of Sony rentals has eclipsed the overall rentals of Nikon gear.

“Sony E mount just beats out Nikon for the system rankings, which are comprised of all the lenses and cameras rented for each mount,” LensRentals says. One explanation for Sony’s rise is that the cameras are used not only by photographers but by videographers as well — Sony gear rents out at twice the rate of Nikon gear for video needs.

There are other interesting takeaways from the data as well, LensRentals says.

One is that Sigma rentals are up 20% this year, “potentially due to the continued increase in quality of its lenses,” the spokesperson says. Sigma’s relatively affordable Art lenses have been receiving rave reviews for their optical quality in recent years.

Sony now controls an estimated 50% of the world’s image sensor market and its latest mirrorless bodies, particularly the new a7R III and a9, have made quite a splash in the camera industry. As it begins to generate record profits through these businesses, Sony has gained a strong foothold for competing against the likes of Canon and Nikon for years to come.

Why You Should Look Into Shooting with Vintage Lenses