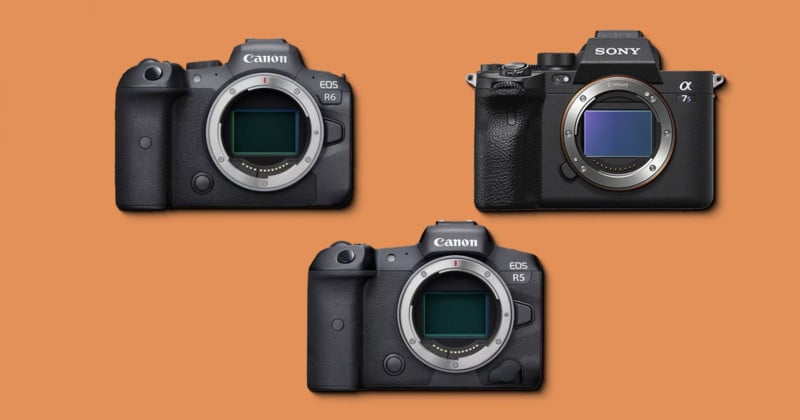 Lensrentals has revealed its most rented camera and lenses of 2022, with Canon and Sony claiming all but one of the top 20 list.

The Canon R5 and R6 are one and two on the list with the Sony Alpha a7S III taking third spot.

The rest of the top 10 are all Canon and Sony lenses with the exception of the Canon 5D Mark IV, the classic DSLR came in eighth.

“Each year, we go back through our data of rentals, and present to you which products are the most rented gear for that year,” says Lensrentals.

“To us, it feels like a good judgment of the industry, as we’re one of the world’s largest rental houses for lenses and cameras.”

It’s the second year in a row that the Canon R5 was top of Lensrentals’ list. The 45-megapixel, full-frame flagship mirrorless camera remains popular with shooters.

The RED Komodo 6K is the only camera not manufactured by the two Japanese giants on the list. The compact cinema camera’s entry marks the first time RED has claimed a spot in the top 20.

“This is no surprise as video platforms have become more of a focus in the recent year, as YouTube and TikTok trended upwards, and Instagram trending downward (despite their newfound focus on video),” adds Lensrentals.

“Another surprise is the holdout against the mirrorless standard, with several EF lenses maintaining their spots on the top twenty, and the Canon 5d Mark IV still holding its place at #8 — despite being over six years old at this point.”

The majority of items borrowed from Lensrentals are pieces of glass.

“While we rent thousands of cameras, lights, and accessories annually, lenses are still our bread and butter,” it says.

Canon is the most rented camera manufacturer taking 35.77% of rentals in 2022. However, Sony gained ground on them when compared with 2021.

“From there, we see a pretty significant falloff of orders with Blackmagic and Nikon being the only two other brands achieving over 5% of our camera rentals — each of them falling a bit from last year’s market share,” Lensrentals says.

“Perhaps what was most surprising to me was to see Leica continuing to outsell Fujifilm, despite Fujifilm being far more budget-friendly and in a similar camera body style as the Leica systems.” Canon has a far healthier lead in the lens market but once again Sony gained on them compared to 2021.

“Sigma lost some ground as they develop lenses for the RF mount, and Nikon continues to fall further in market share.”