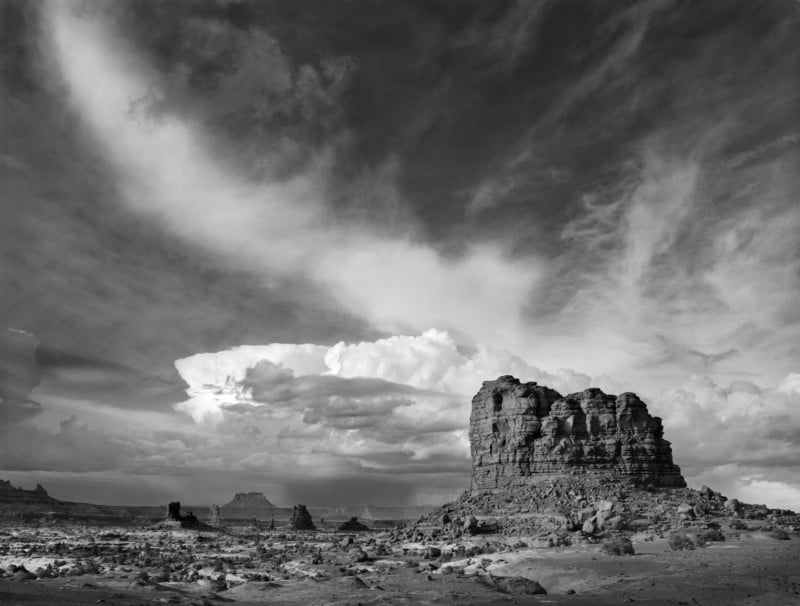 My idea was to provide park visitors with a choice instead of the commonplace color posters. Some of those color posters were excellent but I felt there was a large audience who appreciate black and white. My idea, which I pitched to some of my favourite parks, was to provide the visitors with a “fine art” visual interpretation in black and white.

My original attempts were met with great interest by the various Natural History Associations. Most were already familiar with my photography because of various photographic projects such as magazine articles, gallery/museum shows, or word-of-mouth. I had completed a colour slide show for Capitol Reef National Park a few years before, and my black and white work was already known by some Natural History executives of Canyonlands and Death Valley National Parks.

In this series written for the ELEMENTS Magazine, I am discussing most of these posters. I’ll give technical information where my memory serves me correctly, aesthetic considerations and some highlights of making the photographs on the scene. Please join me on this journey through the past!

In 1988 I resolved to make the journey into the Maze District of Canyonlands National Park. I knew it was a long, rough, daunting drive but my 1970 Ford Bronco was in good shape. I had driven the notorious Elephant Hill and S.O.B. hill years before and experienced difficulties (S.O.B. hill claimed a piece of my taillight) mainly due to my lack of “off-road” driving experience and carburetor issues, but now I felt I had better driving skills and the Bronco was up for the challenge.

My assistant Al Callju and I began our drive from the road near Hite Marina with a full tank of gas. The road from this direction goes through the famed and extremely rough Teapot Canyon but bypasses the fearsome Flint Trail and Golden Stairs. Our ultimate destination was the Doll House camping area and a hike into the “Fins.” The difficult Jeep trail did not disappoint as it was slow going all the way from Teapot Canyon to the Doll House. 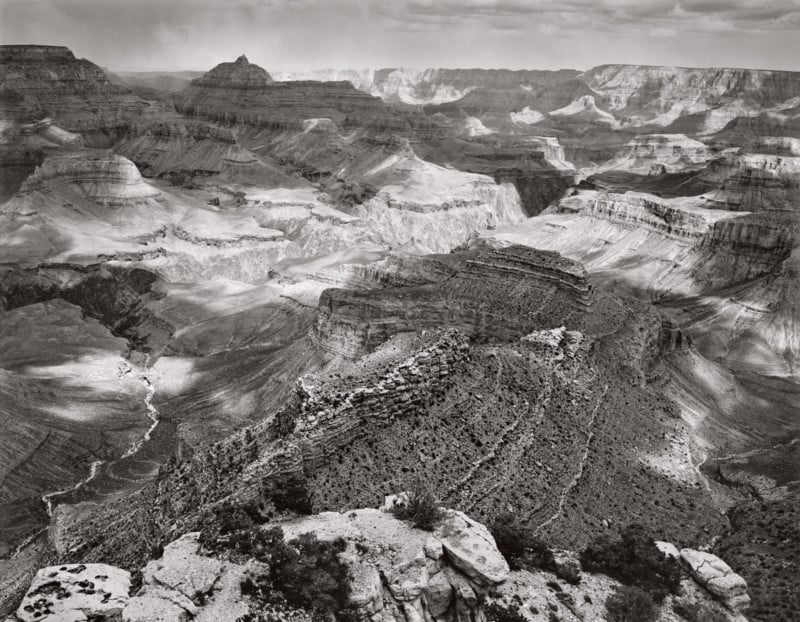 About five miles before the Doll House camp area, we were on a high ridge looking down at the maze of sandstone canyons to the north. On topographic maps this area is known as the “Land of Standing Rocks” and rightfully so; there are standing rocks or buttes near the road and in the distance. I noticed some thunderhead clouds in the distance which appeared to be directly above Candlestick Tower in the Island in the Sky district to the north. I decided this might make a good photograph but there needed to be another element in the sky. Fortunately, a curved band of clouds appeared to be moving from left to right. I recognized the potential for a good photograph here, but the clouds were moving quickly. Too quickly! In panic mode I focused my 4×5 view camera, attached a yellow #8 Wratten filter to my Schneider 121mm Super Angulon lens, calculated the exposure, and shot the image on Tri-X film. I turned over the film holder and made a quick, hasty duplicate exposure but then noticed a jet trail had already moved into the subject area. I really didn’t know if the first exposure was good or if the second exposure recorded much of the jet trail.

Back home after developing the film, I found the first exposure was perfectly composed but about a stop too dense. After attempting to print that negative unsuccessfully I decided to treat the negative in Farmer’s Reducer, hoping to cut down the high density and yield a more printable negative. It worked, but on a different negative I noticed how the reduction action of Farmer’s Reducer was unpredictably quick. At least I had a better negative, but I never used that procedure again.

Because of the nature of this subject the print is very difficult to make. In order to satisfy my vision for the print I currently use a series of pin-registered film contrast masks. I use two Shadow Contrast Increase Masks, a type 1 Fog Mask and a type 2 Fog Mask. This is in addition to substantial burning and dodging as well as varying the paper contrast grade through the masking and burning steps.

I made a mock-up of this image and presented it to the Canyonlands NHA. Fortunately, they liked it and it became a poster to represent the Maze District of the park. I grew to like the image more and more over the years and I feel that it’s a good representation of the great American West.

The article courtesy of ELEMENTS Magazine. The ELEMENTS is the monthly magazine dedicated to elegant landscape photography, insightful editorials and fluid, clean design. Inside you will find an exclusive and in-depth articles and imagery by the best landscape photographers in the world such as Bruce Barnbaum, Christopher Burkett, Chuck Kimmerle, Christian Fletcher, Charlie Waite, Rachael Talibart, Erin Babnik and Freeman Patterson, to name a few. Use the PETAPIXEL10 code for a 10% discount off the annual subscription.