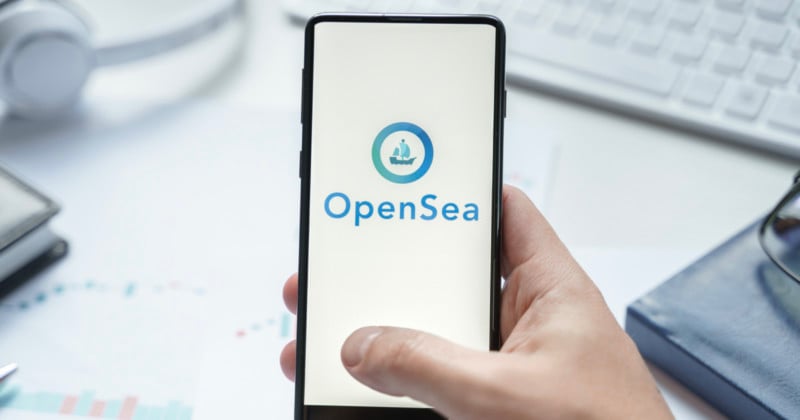 Some artists are reporting major issues with OpenSea, one of the largest non-fungible token (NFT) marketplaces. They say the company has an overly arduous process to report stolen art and is too slow to act once a complaint is filed.

NFTs are verified on a blockchain and thus add a sense of transparency when it comes to buying and selling digital artwork, but none of that matters to the artist if their work is stolen in the first place. Although it is not uncommon for artists to issue takedown notices across various NFT marketplaces, some Twitter users have pointed out that OpenSea has been particularly difficult to deal with when it comes to reporting the theft of art.

Twitter user NFT thefts has been collecting evidence from artists who have publicly tweeted about others impersonating them or selling their artwork without permission. In regards to OpenSea, two particular issues have surfaced: bots that upload stolen artwork and the slow processing of reacting to takedown notices.

One artist, Muffins & Stitches, has been filing numerous takedown notices for stolen art on OpenSea but has received poor support from the company. After submitting a ticket, OpenSea replied it “can take up to a week depending on the complexity of the issue.”

No, really, @opensea is everything OK out there? Up to a week if someone is stealing art and selling it as NFTs on a knockoff-account?
Are you gonna issue remuneration if anything sells? Or take over the NFTs and forward them to real artists? pic.twitter.com/I9e40oN2Mi

“Up to a week if someone is stealing art and selling it as NFTs on a knockoff-account?” Muffins & Stitches tweeted in response. “Are you gonna issue remuneration if anything sells? Or take over the NFTs and forward them to real artists?”

Another Twitter user, Jon Neimeister, has taken the matter into his own hands and asked artists to get in touch if they have had their work stolen and minted as NFT. He explains he will “research and organize legal action against these platforms profiting off stolen work.”

Are you an artist who has had your work stolen and minted as an NFT? Please gather your receipts and send them to CirenSongOfficial at Gmail – over the coming months I am going to research and organize legal action against these platforms profiting off stolen work.

In the Twitter thread, he says that this issue has affected him and his colleagues directly and that he also submitted a claim to OpenSea for stolen work. In response to his claim, OpenSea sent a list of requirements that must be met before OpenSea will even begin an investigation.

.@opensea just responded to my ticket of my own stolen work saying I must meet the requirements below to take down stolen work. It is not the responsibility of artists to spend 3 hours a day filing formal documents proving they own their own work. It’s time for this to end. pic.twitter.com/pJq31RjYHg

Another user highlights that in order to file the request, anyone reporting stolen work has to reveal personal information, such as legal name and address, which is then forwarded to the person selling the stolen assets. This could equip the scammer with sensitive information that could be misused further.

Yo, encountered same theft regarding my own old art!

What I really disliked about filing their DMCA notice is that they provide literally all of your personal data including legal name and legal address straight to the offender. Like, they’re empowering the scammers even more??

“As such a large platform that makes its money on the works of artists, OpenSea has a specific responsibility to ensure it is above board, especially involving its compliance with the DMCA takedown procedures. The Twitter threads show lack of action when notified of copyright infringement,” he tells PetaPixel.

It could be argued that OpenSea’s practices are an indication that its goals are not well aligned with artists and that it is making the process as convoluted as possible so that it does not have to dedicate large amounts of resources to resolving claims. The NFT space is already rife with ridicule and memes involving “digital ownership” of artwork, and OpenSea’s policies don’t seem designed to help artists combat them.

Maddrey says that since OpenSea isn’t making the process easy, leveraging a DMCA takedown might be an artists’ best bet as it is a Federally protected process.

“Section 512 of Title 17 (the Digital Millennium Copyright Act) outlines a procedure for notice and takedown requests. When a DMCA takedown notice is received, the online service provider (OSP) must ‘respond expeditiously’ to that request. OpenSea has a page dedicated to this matter where they discuss the components of a DMCA notice and how to send one to them,” he continues.